Who is Colin Jost?

Colin Jost is an American actor, comedian, and screenwriter best recognized for his work on the popular talk show ‘Saturday Night Live’ where he has been serving as a writer since 2005. He is also known for co-anchoring ‘Weekend Update’ since 2014. He was born in Staten Island, New York to a teacher turned engineer father and a chief medical officer mother. He developed an interest in writing and comedy as a teenager. Jost has won a Peabody Award, four Writers Guild awards (WGA) as well as multiple Emmy Awards for his work on ‘Saturday Night Live.’ As a stand-up comedian, he has performed on the show ‘Late Night with Jimmy Fallon’ and has also made appearances on HBO and TBS. Jost frequently writes articles for ‘The Huffington Post,’ ‘The New York Times Magazine,’ ‘Staten Island Advance’ and ‘Radar.’ On a personal note, the American actor cum screenwriter is in a relationship with the sensational actress Scarlett Johansson. In 2011, Jost was honored with the title of Breakout Artist by ‘Carolines on Broadway.’ 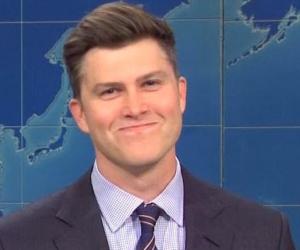 While at the Harvard University, Colin Jost won $5,250 on a university edition of ‘The Weakest Link.’ In 2005, he was hired for NBC's Saturday Night Live’ (SNL) as a writer. From 2009 to 2012, he served as a writing supervisor for the show. From 2012 to 2015, he worked in the position of co-head writer and then regained the same status in late 2017. In 2014, Jost joined the cast of ‘Weekend Update’ as a co-anchor. As a writer, he has his work published in ‘The New Yorker Magazine.’ Besides this, he frequently writes articles for ‘Radar,’ ‘The Huffington Post,’ ‘The New York Times Magazine’ and ‘Staten Island Advance.’

Jost wrote the screenplay of the 2015 comedy flick ‘Staten Island Summer’ in which he also had a minor role. He then played Paul in the film ‘How to Be Single’. As a stand-up comedian, the American artist has appeared in the show ‘Late Night with Jimmy Fallon’. He has also appeared on TBS and HBO. In 2009, Jost became a ‘face’ at the Montréal Just for Laughs festival. Since then, he has performed numerous times at the Montréal festival and the Chicago Just for Laughs festival.

Who is Colin Jost? Everything You Need to Know

Who is Colin Jost? Everything You Need to Know