Ciara Princess Harris is a ‘Grammy’ award-winning American singer, record producer, songwriter, and actress. She started hogging the limelight after the release of her debut song and album, both titled ‘Goodies.’ She became part of the girl group ‘Hearsay’ during her teens and when the group disbanded, she embarked on a solo music career. While working on different projects as a songwriter, she met music producer Jazze Pha who helped her sign a record contract with ‘LaFace Records.’ Her debut single ‘Goodies’ became a sensational hit commercially and critically, topping the ‘US Billboard Hot 100’ chart for seven weeks and reaching atop the ‘UK Singles Chart.’ She then released her debut album bearing the same title. The album became a grand success, earning her two ‘Grammy Award’ nominations. Her second studio album ‘Ciara: The Evolution’ released after a couple of years and became a huge success as well. However, she couldn’t continue her success story with her next five albums – ‘Fantasy Ride,’ ‘Basic Instinct,’ ‘Ciara,’ ‘Jackie,’ and ‘Beauty Marks.’ She has also tried her hand at acting with films and TV series like ‘All You've Got,’ ‘That's My Boy,’ ‘Idols South Africa,’ and ‘The Game.’ 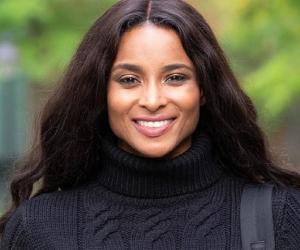 Following her graduation, she signed a record contract with ‘LaFace Records’ with the help of Pha.

On June 8, 2004, ‘LaFace Records’ released her debut single ‘Goodies’ which served as the lead single of her first studio album. The song, which was co-written by Craig Love, Jefferson, LeMarquis, and Sean Garrett and produced by Lil Jon, featured American rapper Petey Pablo.

The single received appreciation from the critics and topped the ‘Billboard Hot 100’ chart for seven weeks. It was the first time since 1977 that a debut single by a female singer had achieved such a feat.

The song also topped ‘US Hot R&B/Hip-Hop Singles & Tracks’ chart, ‘US Rhythmic Top 40’ chart, and the ‘UK Singles Chart.’ It also earned her the title ‘First Lady or Princess of Crunk&B.’

On September 28, 2004, her debut studio album ‘Goodies’ was released through ‘Sho'nuff Records’ and ‘LaFace Records.’ The concept of the album came from her debut song ‘Goodies’ which was developed as a female crunk counterpart to ‘Yeah!,’ a song by the popular American singer Usher.

The album was a commercial success, debuting at #3 on the ‘US Billboard 200’ chart. It also had a 71-week run on the chart. It climbed atop the ‘Top R&B/Hip-Hop Albums’ chart. It received 3 x Platinum certification from the ‘Recording Industry Association of America’ (RIAA).

‘1, 2 Step,’ which released on October 23, 2004, featured popular American rapper Missy Elliott. It peaked at #5 on ‘US Billboard Hot 100’ and topped the ‘US Billboard Pop 100’ and ‘US Billboard Mainstream Top 40’ charts. It was certified platinum by RIAA and ARIA and gold by RMNZ.

Ciara was featured in Missy Elliott’s hit single ‘Lose Control’ along with Fatman Scoop. The song, which released on May 27, 2005, won her the ‘Grammy Award’ for ‘Best Short Form Music Video’ and the ‘Soul Train Music Award’ for ‘Best R&B/Soul or Rap Dance Cut’ along with Elliott and Scoop in 2006.

Her second studio album ‘Ciara: The Evolution’ released on December 5, 2006, and became her first album to top the ‘US Billboard 200’ chart. It also topped the ‘U.S. Billboard Top R&B/Hip-Hop Albums’ chart and received platinum certification from RIAA.

Meanwhile, she embarked on ‘The Evolution Tour’ to promote the album ‘Ciara: The Evolution’ in October 2006 which marked her first headlining tour. Other headlining tours of Ciara include the ‘Screamfest '07’ with T.I. (2007), the ‘Jay-Z & Ciara Live’ concert tour with Jay-Z (2009) and the ‘Jackie Tour’ in 2015.

Her achievements as a recording artist earned her ‘Woman of the Year’ award at the annual ‘Billboard Women in Music’ event held by ‘Billboard’ in October 2008.

She was featured in several magazine spreads following her multimillion-dollar deal with ‘Wilhelmina Models’ in 2009.

Her fourth studio album ‘Basic Instinct’ released on December 10, 2010, and met with little success. The following year, she signed a new record deal with ‘Epic Records.’

She released her eponymous fifth studio album on July 5, 2013 through ‘Epic Records.’ It debuted at #2 on the ‘US Billboard 200’ chart, becoming her fourth album to reach the top three positions of the chart.

On May 1, 2015, she released her sixth studio album ‘Jackie’ through ‘Sony Music Entertainment.’ It debuted at #17 on the ‘US Billboard 200’ chart. However, it experienced the lowest first week sales compared to her previous five albums, selling only 20,000 copies.

It was announced on May 12, 2016 that ‘IMG’ has signed a modeling contract with her. Later that year, she became a global brand ambassador for ‘Revlon.’

She co-hosted the ‘Billboard Music Awards’ in 2016 along with American hip hop recording artist and actor Ludacris.

Her seventh studio album ‘Beauty Marks’ released on May 10, 2019, and debuted at number 87 on the ‘US Billboard 200’ chart, making it her lowest ranking album to date. The album received mixed reviews and includes singles, such as ‘Level Up,’ ‘Freak Me,’ ‘Dose,’ ‘Greatest Love,’ and ‘Thinkin Bout You.’

Ciara was born in Fort Hood.

Who is Ciara? Everything You Need to Know

Who is Ciara? Everything You Need to Know