Who is Chance the Rapper?

Chancelor Johnathan Bennett, better known as Chance the Rapper, is an American hip hop recording artist who came into prominence for his rap music. Born in Chicago, Illinois, Bennett had a passion for singing from an early age. He wanted to be a musician, even though his father wanted him to land a white-collar job. Bennett formed his own hip-hop duo called ‘Instrumentality’ with a friend. A soul and jazz enthusiast, it was Kanye West’s debut album ‘The College Dropout’ that sparked Bennett’s interest in hip-hop. Forsaking his studies, Bennett took to music professionally. Though he released several singles and a mixtape, it was his second mixtape ‘Acid Rap’ that truly launched his career. Bennett’s professional graph peaked further with his third mixtape ‘Coloring Book’ that earned him three ‘Grammy’ nominations. It also became the first streaming-only album ever to receive a ‘Grammy’ nomination. Other than his solo ventures, Bennett has clubbed with various other musicians. He collaborated with the lead vocalist of the band ‘The Social Experiment’ to come up with a popular album titled ‘Surf.’ 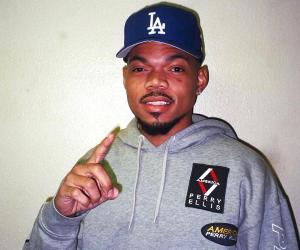 Despite being ridiculed by his teachers, Bennett’s passion for music did not wither away. Instead, he pursued his ambition with full force and recorded his first mixtape ‘10 Day’ in early 2011. He ended the year by releasing a song titled ‘Windows.’

In April 2012, Bennett released his mixtape to an overwhelming response. The mixtape was commercially successful and critically lauded. Ever since its release, it has been downloaded over 500,000 times via ‘Datpiff.’ The mixtape was featured in ‘Forbes’ magazine’s ‘Cheap Tunes’ column.

After a stint with American rapper Childish Gambino in the latter’s mixtape ‘Royalty,’ Bennett released his second mixtape ‘Acid Rap’ in April 2013. Downloaded over 1.5 million times, the mixtape was praised by music critics and fans alike. It even received the nomination for ‘Best Mixtape’ at the 2013 ‘BET Hip Hop Awards.’

In May 2013, he released the single ‘Paranoia’ for the ‘Songs from Scratch’ series. Next, he was featured in Childish Gambino's album ‘Because the Internet,’ which released on December 10, 2013.

In March 2014, just when his music career was on a roll, Bennett made his mark as a model as well. He appeared in a shoppable online video for ‘Dockers,’ promoting the brand's spring line.

In 2015, Bennett released a short film titled ‘Mr. Happy.’ Directed by Colin Tilley, it revolves around the protagonist ‘Victor,’ who is down with depression and has suicidal tendencies until he meets ‘Mr. Happy.’

In May 2015, Bennett released his album ‘Surf’ on the American iTunes store as an iTunes Exclusive. The album gained high acclaim from music critics. He soon followed it up with a performance at the ‘Bonnaroo Music Festival’ for the superjam concert collection. During this time, he also performed as a guest alongside fellow rapper Kendrick Lamar with the popular band ‘Earth, Wind & Fire.’

Together with Lil B, Bennett recorded a collaborative mixtape titled ‘Free Based Freestyles Mixtape’ and released it in August 2015. He followed it up with a video for his new song ‘Family Matters.’ The song was a rework of Kanye West’s song ‘Family Business’ from the latter’s 2004 album ‘The College Dropout.’

On October 27, 2015, Bennett premiered a new song titled ‘Angels’ on ‘The Late Show with Stephen Colbert.’ Later in the year, he performed on ‘Saturday Night Live,’ wherein he premiered yet another song titled ‘Somewhere in Paradise.’

In 2016, Bennett co-wrote and featured in Kanye West's song ‘Ultralight Beam’ for the album ‘The Life of Pablo.’ Other songs written by him for the album include ‘Father Stretch My Hands Pt. 1,’ ‘Famous,’ ‘Feedback,’ and ‘Waves.’

Following his collaboration with West, he featured with hip-hop duo ‘Macklemore & Ryan Lewis’ in the track ‘Need To Know’ for the album ‘This Unruly Mess I've Made.’ He next featured in Skrillex's remix of Hundred Waters' ‘Show Me Love.’

In May 2016, Bennett came up with his third mixtape ‘Coloring Book.’ The mixtape streamed exclusively on Apple Music, debuting at number eight on ‘Billboard 200.’ The score of the mixtape was widely appreciated by the audience and critics alike.

Bennett’s work includes the single ‘We the People,’ which he did for the ‘Nike’ commercial ‘Unlimited Together.’ He even starred in it and also in the ‘Nestle Kit Kat’ commercial.

In September 2016, he began the ‘Magnificent Coloring World Tour’ in San Diego. He initiated what would be the first ever music festival at ‘U.S. Cellular Field’ in Chicago’s South Side.

He performed at the 59th ‘Annual Grammy Awards’ in February 2017. Later in the year, his song ‘Last Christmas,’ which was performed on ‘Saturday Night Live,’ was nominated for an ‘Emmy Award.’

In August 2017, Bennett headlined day three of ‘Lollapalooza Music Festival.’ The following year, he was featured in ‘Logout,’ a song from Saba’s album ‘Care for Me.’ He was also featured in ‘Best Life’ from Cardi B’s debut album ‘Invasion of Privacy.’

In November 2018, he released two new singles, namely ‘My Own Thing’ and ‘The Man Who Has Everything’ for his upcoming debut studio album. He was also featured in Ed Sheeran’s song ‘Cross Me.’

Bennett’s debut studio album ‘The Big Day’ was released independently on 26 July 2019. The album debuted at number two on the ‘US Billboard 200’ and was critically appreciated. The album was influenced by his wedding, which took place in March 2019.

Nickelodeon announced Bennett would be the host of the 2020 Kids' Choice Awards on March 22. The entire show was later scrapped and replaced with a virtual ceremony hosted by Victoria Justice from her home, delayed to May 2 due to the COVID-19 pandemic, and with a lack of live musical performances overall due to the circumstances.
In January 2020, it was announced that Bennett will be the host of the reboot of Punk'd that will air on the streaming service Quibi.
In 2020, Bennett will be honored by UNICEF at their annual gala in Chicago with the UNICEF Chicago Humanitarian Award.
His debut studio album The Big Day was released in 2019.

He began to gain mainstream recognition in 2013 after releasing his second mixtape, Acid Rap. He then released his third mixtape, Coloring Book in 2016, which garnered further critical acclaim and attention. It earned him three Grammy Awards, including the award for Best Rap Album; upon winning, it became the first streaming-only album to win a Grammy Award, and peaked at number eight on the Billboard 200.

Bennett appeared on American rapper Childish Gambino's sixth mixtape, Royalty, on the track "They Don't Like Me". Gambino would go on to ask Bennett to join on his first concert tour of North America as his opening act.
Born in Chicago, Bennett released his debut mixtape 10 Day in 2012.

At Jones College Prep High School, some of his teachers ridiculed his aspirations to become a musician. In early 2011 during his senior year, following a 10-day suspension for marijuana possession on campus, Bennett recorded his first full-length project, a mixtape entitled 10 Day (also known as #10Day). In December 2011, he released a song titled "Windows", and publicly announced his 10 Day project. In February 2012, Bennett was highlighted as one of Complex magazine's "10 New Chicago Rappers to Watch Out For". Bennett says he spent "about eight months recording, writing, and making connections off of the hunger to put out something". Bennett released the mixtape on April 3, 2012, and it has since been downloaded over 500,000 times via mixtape-sharing site DatPiff. The mixtape was well-received locally and helped Bennett make connections with producers such as Chuck Inglish, Kenny Jame$ and Blended Babies. The mixtape also grabbed the attention of Forbes magazine, which featured it in the publication's Cheap Tunes column.

Bennett's father, Ken Bennett, has been involved in Democratic Party politics on the local and national level. Ken Bennett worked for Barack Obama as a presidential appointee and as an aide. Ken Bennett also worked on Obama's presidential campaign in 2008, and has worked as an aide to Mayor of Chicago Rahm Emanuel and as 2019 Chicago mayoral campaign co-chair for Toni Preckwinkle. Despite his family's ties to the Democratic Party, Bennett has called himself an independent voter, though he has a history of supporting Democrats. Bennett volunteered with Barack Obama's reelection campaign by phonebanking in Hyde Park, Chicago and has given speeches at the University of Chicago Institute of Politics.

Chance the Rapper was born in Chicago.

Who is Chance the Rapper? Everything You Need to Know

Who is Chance the Rapper? Everything You Need to Know

Title
Author
Date
Publisher
Description
Prep-Segue
By Oscar Wells Gabriel II
May 17, 2021
AP NEWS
AT&T STRIKES DEAL WITH DISCOVERY TO COMBINE MEDIA OUTLETS NEW YORK (AP) -- AT&T is putting all is media eggs into one basket. And the resulting $43 billion deal may change the way we watch news, sports and entertainment.
Chance the Rapper says even he doesn't have a direct dial to Barack Obama and Jay-Z - Business Insider
Olivia Singh
October 9, 2019
Business Insider
The musician appeared on the newest 'Carpool Karaoke' with CBS's 'Late Late Show' host James Corden and spoke about the celebrities he's friends with.
Steven Universe The Movie to Feature Musical Collaborations with Emmy, Grammy and Tony Award Winners
June 17, 2019
WebWire
Cartoon Network's Steven Universe returns this fall with the highly anticipated musical Steven Universe The Movie, featuring collaborations with an all-star lineup of multiple award-winning artists including Chance The Rapper, Estelle, Patti LuPone, Uzo Aduba, Gallant, Aimee Mann, and much more., , , , The epic music-filled adventure for Steven and his friends will overflow with more new songs and music than ever before. In his first television movie scheduled for this fall, Steven thinks...