Chain Myth is a 5v5 first-person hero shooter game with MOBA mechanics and a play-to-earn model. The game's theme is inspired by Indian culture, with the superpowers of their Gods and Goddesses’ as the main design points behind ChainMyth’s characters.

Characters are tokenized as NFTs and introduced to unlock all the 14 gods and goddesses in-game. Stake your digital asset, unlock the heroes and weapons, and enter the battle arena. Fees for ranked games and hosted tournaments will be distributed to NFT owners.

ChainMyth will tokenize your virtual assets such as in-game characters via NFTs. ChainMyth NFTs in your Solana wallet will be retrievable through the in-game dashboard. Upon selecting the NFT, the game client makes a metadata call to your character and weapons. Your NFT's attributes are then retrieved and your hero is summoned based on the NFT metadata.

For ChainMyth’s NFT launch, the Monkey King NFT will be minted. The rest of the 13 characters will be airdropped to owners, meaning you get 14 characters for the price of only one! Virtual assets such as weapons, skins and taunts can also be claimed via battlepasses and quests that will arrive in the future. 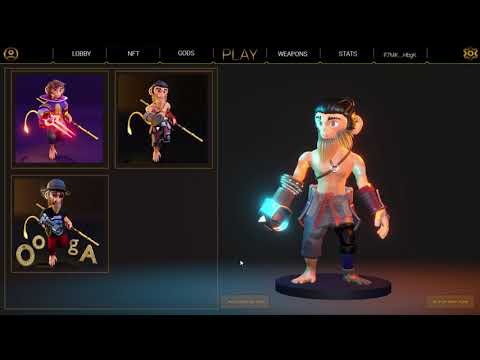 Get a Monkey King from secondary (mint was 1.2 SOL):