Captain Marvel is a 2019 American superhero film based on Marvel Comics featuring the character Carol Danvers / Captain Marvel. Produced by Marvel Studios and distributed by Walt Disney Studios Motion Pictures, it is the 21st film in the Marvel Cinematic Universe (MCU).

The film was written and directed by Anna Boden and Ryan Fleck, with Geneva Robertson-Dworet also contributing to the screenplay. Brie Larson stars as Carol Danvers, alongside Samuel L. Jackson, Ben Mendelsohn, Djimon Hounsou, Lee Pace, Lashana Lynch, Gemma Chan, Annette Bening, Clark Gregg, and Jude Law. Set in 1995, the story follows Danvers as she becomes Captain Marvel after Earth is caught in the center of a galactic conflict between two alien civilizations.

Development of the film began by May 2013. It was officially announced in October 2014 as Marvel Studios' first female-led superhero film. Nicole Perlman and Meg LeFauve were hired to write the film the following April after submitting separate takes on the character, and borrowed elements from Roy Thomas' 1971 "Kree–Skrull War" comic book storyline. Larson was announced as Danvers at the 2016 San Diego Comic-Con, with Boden and Fleck hired to direct in April 2017. Robertson-Dworet was soon hired to re-write the script, with the rest of the cast added by the start of filming. Location shooting began in January 2018, with principal photography starting that March in California and concluding in Louisiana in July 2018. Several actors reprise their roles from previous MCU films in Captain Marvel, including Jackson and Gregg who were digitally de-aged in post-production to reflect the film's 1990s setting.

Captain Marvel premiered in London on February 27, 2019, and was theatrically released in the United States on March 8, as part of Phase Three of the MCU. The film grossed over $1.1 billion worldwide, making it the first female-led superhero film to pass the billion-dollar mark. It became the fifth-highest-grossing film of 2019 and was the 23rd-highest-grossing film of all time during its theatrical run. The film received praise for the performances of the cast, particularly that of Larson. A sequel, The Marvels, is scheduled for release on February 17, 2023.

In 1995, on the Kree Empire's capital planet of Hala, Starforce member Vers suffers from amnesia and recurring nightmares involving an older woman. Yon-Rogg, her mentor and commander, trains Vers to control her abilities, while the Supreme Intelligence, the artificial intelligence that rules the Kree, urges her to keep her emotions in check.

During a mission to rescue an undercover operative infiltrating a group of Skrulls, alien shapeshifters with whom the Kree are at war, Vers is captured by Skrull commander Talos. A probe of Vers' memories leads them to Earth. Vers escapes and crash-lands in Los Angeles. Her presence attracts S.H.I.E.L.D. agents Nick Fury and Phil Coulson, whose investigation is interrupted by a Skrull attack. Vers recovers a crystal containing her extracted memories in the ensuing chase while Fury kills a Skrull impersonating Coulson.

Talos, disguised as Fury's boss Keller, orders Fury to work with Vers and keep tabs on her. Using her extracted memories, Vers and Fury go to the Project Pegasus installation at a U.S. Air Force base. They discover that Vers was a pilot presumed to have died in 1989 while testing an experimental light-speed engine designed by Dr. Wendy Lawson, whom Vers recognizes as the woman from her nightmares. Fury informs S.H.I.E.L.D. of their location and a team arrives. Fury realizes that Keller is Talos and helps Vers escape in a jet with Lawson's stowaway cat Goose.

They fly to Louisiana to meet former pilot Maria Rambeau, the last person to see Vers and Lawson alive. Rambeau and her daughter Monica reveal that Vers is Carol Danvers, who was once like family to them. Talos, arriving unarmed, explains that the Skrulls are refugees searching for a new home and that Lawson was Mar-Vell, a renegade Kree scientist helping them. Talos plays a recovered blackbox recording from Lawson's jet, prompting Danvers to remember the crash: Yon-Rogg killed Mar-Vell to prevent her from destroying the engine before the Kree could recover it. Destroying the engine herself, Danvers absorbed the energy from the ensuing explosion, gaining powers but losing her memory.

Danvers, Talos, Fury, and Rambeau locate Lawson's cloaked laboratory orbiting Earth, where Lawson hid several Skrulls, including Talos' family, and the Tesseract, the power source of Lawson's engine. There, Danvers is captured by Starforce and interfaces with the Supreme Intelligence. Danvers removes the Kree implant that suppressed her powers during their encounter, allowing her to reach her full potential. In the subsequent battle, Fury retrieves Goose, who is revealed to be an alien Flerken. Goose swallows the Tesseract and scratches Fury, blinding his left eye. Danvers destroys a Kree bomber, forcing Kree officer Ronan the Accuser and his squadron to retreat.

Danvers overpowers Yon-Rogg and sends him to Hala with a warning for the Supreme Intelligence. She then departs to help the Skrulls find a new homeworld, leaving Fury a modified pager to contact her in an emergency. Fury drafts an initiative to locate heroes like Danvers, naming it after her Air Force call sign, "Avenger". In a mid-credits scene, set in 2018, the activated pager[N 1] is being monitored by the Avengers when Danvers appears looking for Fury.[N 2] In a post-credits scene, Goose climbs onto Fury's desk and vomits the Tesseract.

Captain Marvel grossed $426.8 million in the United States and Canada, and $701.6 million in other territories, for a worldwide total of $1.128 billion. It had a worldwide opening of $456.7 million, the sixth-biggest of all time, and biggest opening for a female-led film. Deadline Hollywood estimated that the film had a total production and advertising cost of $300 million. It is the fifth-highest-grossing film of 2019. On April 2, 2019, the film crossed the $1 billion mark worldwide, becoming the first female-led superhero movie to do so, as well as the seventh Marvel title, the 19th Disney film, and 38th film overall. Deadline Hollywood calculated the film's net profit as $414 million, accounting for production budgets, marketing, talent participations, and other costs; box office grosses and home media revenues placed it fifth on their list of 2019's "Most Valuable Blockbusters".

The film's first 24 hours of advance ticket sales, which began on January 7, 2019, ranked third on Fandango for an MCU film, behind Avengers: Infinity War and Black Panther, and second on Atom Tickets, behind Infinity War. According to Fandango, Captain Marvel had the third-largest advanced ticket sales of any MCU film, behind Infinity War and Black Panther, and surpassed Wonder Woman and Aquaman (2018) during the same time period. The film made $61.4 million on its first day, including $20.7 million from Thursday night previews, which was the fifth-highest total for a Marvel film and second-highest for a March release behind Batman v Superman: Dawn of Justice (2016). It made $153.4 million over its opening weekend, the third-best March opening and seventh-highest of the MCU. The film remained in first place during its second weekend, with $69.3 million, the second-highest sophomore weekend in March behind Beauty and the Beast (2017). The film grossed $35.2 million in its third weekend, dropping to second, behind Us. In the following weeks it dropped to third, fifth, sixth, and fourth, before rising to second again in its eighth weekend with the release of Avengers: Endgame. 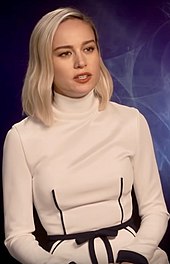 The review aggregator Rotten Tomatoes reported an approval rating of 79%, with an average score of 6.8/10, based on 543 reviews. The website's critical consensus reads, "Packed with action, humor, and visual thrills, Captain Marvel introduces the MCU's latest hero with an origin story that makes effective use of the franchise's signature formula."[189] Metacritic, which uses a weighted average, assigned the film a score of 64 out of 100 based on 56 critics, indicating "generally favorable reviews". According to The New York Times, the film's overall reception was "fairly positive", but it wasn't as well-received as other films in the MCU. The Hindustan Times, collating multiple reviews of the film, noted praise for Brie Larson's performance but also criticism for the film's "convoluted plot and lack of originality".