(born September 23, 1949) is an American singer, songwriter, and musician. He has released twenty studio albums, many of which feature his backing band the E Street Band. Originally from the Jersey Shore, he is one of the originators of the heartland rock style of music, combining mainstream rock musical style with narrative songs about working class American life. During a career that has spanned five decades, Springsteen has become known for his poetic, socially conscious lyrics and energetic stage performances, sometimes lasting up to four hours in length. He has been nicknamed "the Boss".

Who is Bruce Springsteen?

Bruce Springsteen is a popular American singer, prolific songwriter, guitarist, and recording artist. He became popular because of his unique and creative songwriting ability. His songwriting skills caught the attention of a lot of people, fans, and music professionals alike. Most of his songs reflect his political opinions and his working-class roots in New Jersey, where he grew up. He is a positive thinker; he sees greatness in the labors of daily American life and is stimulated by the stories of ordinary people. He is not a religious person, but doesn’t deny the fact that his Catholic upbringing has guided his musical career. He is one of America's most admired musicians. His greatest work ‘Born in the USA’ is a best-selling album. His album ‘Born to Run’ is also regarded as one of the best rock and roll albums and Springsteen's finest works. The title track of the album was an analysis of the unfair treatment of Vietnam veterans, some of whom were his friends. His songs ‘Born in the USA’ and ‘Born to Run’ have made Springsteen the rock star that he is today. 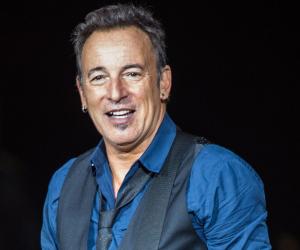 Springsteen’s mother bought him a $60 Kent guitar in 1964, which was remembered in his song ‘The Wish.’

He started performing with various bands. In 1970, well-known ‘San Francisco Examiner’ music critic Philip Elwood gave him a compliment by depicting him as the most remarkable composer.

Starting from 1970, he tried to form various bands that didn’t turn out well. Two years later, he caught the attention of the likes of Mike Appel, Jim Cretecos, and John Hammond who worked together to land him a record deal with ‘Columbia Records.’

‘Crawdaddy’ magazine’s editor Peter Knobler interviewed him in 1973 and remarked saying “He sings with a freshness and urgency I haven't heard.”

Boston's ‘The Real Paper’ music critic Jon Landau saw his performance at the ‘Harvard Square Theater’ in 1974, and commented that Bruce Springsteen is the future of rock and roll.

In 1975, Springsteen and the ‘E Street Band’ began a show at New York's ‘Bottom Line Club.’ It became so popular that the ‘Rolling Stone’ magazine recorded the event as ‘One of the 50 Moments That Changed Rock and Roll.’

Also in 1975, his third album ‘Born to Run’ catapulted him to fame. It peaked on ‘Billboard 200’ at No.3. He was on the covers of both ‘Time’ and ‘Newsweek’ magazines simultaneously, something that previously happened only with world leaders.

In 1977, a lawsuit between him and former manager Mike Appel kept him out of the studio for nearly a year.

‘Born in the USA’ sold 45 million copies worldwide in 1984, becoming one of the best-selling albums, with seven singles hitting the Top 10.

He released his album ‘Tunnel of Love’ in 1987. He performed at the ‘Tunnel of Love Express Tour’ at the ‘Radrennbahn Weißensee’ in East Berlin, which was attended by 300,000 fans.

Springsteen was inducted into the ‘Rock and Roll Hall of Fame’ in 1999.

In 2008, he sang ‘Working on a Dream’ with Scialfa in support of Barack Obama’s presidential campaign.

He performed at the halftime show at ‘Super Bowl XLIII’ on February 1, 2009.

In January 2016, ‘The River Tour’ began in support of ‘The Ties That Bind: The River Collection’ box set.

‘Chapter and Verse,’ a collection from Springsteen's career dating back to 1966, was released in September 2016.

In September 2016, Springsteen performed for four hours and four minutes at ‘Citizens Bank Park’ in Philadelphia, Pennsylvania as part of ‘The River 2016 Tour.’ It is his longest-ever show in the United States.

The live album ‘Springsteen on Broadway’ was released in December 2018.

Who is Bruce Springsteen? Everything You Need to Know

Title
Date
Link
brucespringsteen.net
Is a