Rigid organs that constitute part of the endoskeleton of vertebrates

Bones protect the various other organs of the body, produce red and white blood cells, store minerals, provide structure and support for the body, and enable mobility. Bones come in a variety of shapes and sizes and have a complex internal and external structure. They are lightweight yet strong and hard, and serve multiple functions.

Bone tissue (osseous tissue) is hard tissue, a type of specialized connective tissue. It has a honeycomb-like matrix internally, which helps to give the bone rigidity. Bone tissue is made up of different types of bone cells. Osteoblasts and osteocytes are involved in the formation and mineralization of bone; osteoclasts are involved in the resorption of bone tissue. Modified (flattened) osteoblasts become the lining cells that form a protective layer on the bone surface. The mineralized matrix of bone tissue has an organic component of mainly collagen called ossein and an inorganic component of bone mineral made up of various salts. Bone tissue is mineralized tissue of two types, cortical bone and cancellous bone. Other types of tissue found in bones include bone marrow, endosteum, periosteum, nerves, blood vessels and cartilage.

In the human body at birth, there are approximately 300 bones present; many of these fuse together during development, leaving a total of 206 separate bones in the adult, not counting numerous small sesamoid bones.[3][4][5] The largest bone in the body is the femur or thigh-bone, and the smallest is the stapes in the middle ear.

The Greek word for bone, hence the many terms that use it as a prefix—such as osteopathy.

Bone is not uniformly solid, but consists of a flexible matrix (about 30%) and bound minerals (about 70%) which are intricately woven and endlessly remodeled by a group of specialized bone cells. Their unique composition and design allows bones to be relatively hard and strong, while remaining lightweight.

Bone matrix is 90 to 95% composed of elastic collagen fibers, also known as ossein, and the remainder is ground substance. The elasticity of collagen improves fracture resistance. The matrix is hardened by the binding of inorganic mineral salt, calcium phosphate, in a chemical arrangement known as calcium hydroxylapatite. It is the bone mineralization that give bones rigidity.

Bone is actively constructed and remodeled throughout life by special bone cells known as osteoblasts and osteoclasts. Within any single bone, the tissue is woven into two main patterns, known as cortical and cancellous bone, and each with different appearance and characteristics.

The hard outer layer of bones is composed of cortical bone, which is also called compact bone as it is much denser than cancellous bone. It forms the hard exterior (cortex) of bones. The cortical bone gives bone its smooth, white, and solid appearance, and accounts for 80% of the total bone mass of an adult human skeleton. It facilitates bone's main functions—to support the whole body, to protect organs, to provide levers for movement, and to store and release chemical elements, mainly calcium. It consists of multiple microscopic columns, each called an osteon or Haversian system. Each column is multiple layers of osteoblasts and osteocytes around a central canal called the haversian canal. Volkmann's canals at right angles connect the osteons together. The columns are metabolically active, and as bone is reabsorbed and created the nature and location of the cells within the osteon will change. Cortical bone is covered by a periosteum on its outer surface, and an endosteum on its inner surface. The endosteum is the boundary between the cortical bone and the cancellous bone. The primary anatomical and functional unit of cortical bone is the osteon. 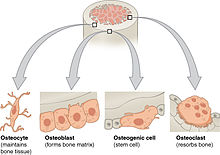 Bone is metabolically active tissue composed of several types of cells. These cells include osteoblasts, which are involved in the creation and mineralization of bone tissue, osteocytes, and osteoclasts, which are involved in the reabsorption of bone tissue. Osteoblasts and osteocytes are derived from osteoprogenitor cells, but osteoclasts are derived from the same cells that differentiate to form macrophages and monocytes. Within the marrow of the bone there are also hematopoietic stem cells. These cells give rise to other cells, including white blood cells, red blood cells, and platelets. 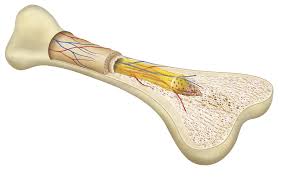 Osteoblasts are mononucleate bone-forming cells. They are located on the surface of osteon seams and make a protein mixture known as osteoid, which mineralizes to become bone.The osteoid seam is a narrow region of newly formed organic matrix, not yet mineralized, located on the surface of a bone. Osteoid is primarily composed of Type I collagen. Osteoblasts also manufacture hormones, such as prostaglandins, to act on the bone itself. The osteoblast creates and repairs new bone by actually building around itself. First, the osteoblast puts up collagen fibers. These collagen fibers are used as a framework for the osteoblasts' work. The osteoblast then deposits calcium phosphate which is hardened by hydroxide and bicarbonate ions. The brand-new bone created by the osteoblast is called osteoid. Once the osteoblast is finished working it is actually trapped inside the bone once it hardens. When the osteoblast becomes trapped, it becomes known as an osteocyte. Other osteoblasts remain on the top of the new bone and are used to protect the underlying bone, these become known as lining cells

Osteocytes are cells of mesenchymal origin and originate from osteoblasts that have migrated into and become trapped and surrounded by bone matrix that they themselves produced. The spaces the cell body of osteocytes occupy within the mineralized collagen type I matrix are known as lacunae, while the osteocyte cell processes occupy channels called canaliculi. The many processes of osteocytes reach out to meet osteoblasts, osteoclasts, bone lining cells, and other osteocytes probably for the purposes of communication. Osteocytes remain in contact with other osteocytes in the bone through gap junctions—coupled cell processes which pass through the canalicular channels.

Osteoclasts are very large multinucleate cells that are responsible for the breakdown of bones by the process of bone resorption. New bone is then formed by the osteoblasts. Bone is constantly remodeled by the resorption of osteoclasts and created by osteoblasts. Osteoclasts are large cells with multiple nuclei located on bone surfaces in what are called Howship's lacunae (or resorption pits). These lacunae are the result of surrounding bone tissue that has been reabsorbed. Because the osteoclasts are derived from a monocyte stem-cell lineage, they are equipped with phagocytic-like mechanisms similar to circulating macrophages. Osteoclasts mature and/or migrate to discrete bone surfaces. Upon arrival, active enzymes, such as tartrate-resistant acid phosphatase, are secreted against the mineral substrate.The reabsorption of bone by osteoclasts also plays a role in calcium homeostasis

Search on Google News
Search on Bing News
Title
Author
Date
Publisher
Description
All you need to know about bone cancer risk and treatment - Times of India
August 4, 2021
The Times of India
Cancer starts when cells begin to grow out of control. Cells in any part of the body can become cancer and can then spread to other parts of the body.
Frequent fractures can be a sign of osteoporosis. Here is what you can do - Times of India
July 28, 2021
The Times of India
Frequent fractures are one of the most common problems that come with old age.
New Technique Grows Realistic Bone in a Dish
Anna Goshua
June 4, 2021
Scientific American
Scientific American is the essential guide to the most awe-inspiring advances in science and technology, explaining how they change our understanding of the world and shape our lives.
Shadow and Bone? Nah, I'd rather scroll through Netflix till the end of time
Mark Serrels
May 3, 2021
CNET
Anyone else spend more time scrolling than they do watching?
How to watch 'Shadow and Bone,' the new Netflix series based on the popular fantasy novel
Ben Blanchet
April 23, 2021
Business Insider
"Shadow and Bone" follows an orphan mapmaker who joins an army as dark forces enter her world. The first season is now streaming on Netflix.
SHOW MORE
Is a