Robert James Fischer (March 9, 1943 – January 17, 2008) was an American chess grandmaster and the eleventh World Chess Champion. A chess prodigy, at age 14 he won the 1958 U.S. Championship. In 1964, he won the same tournament with a perfect score (11 wins). Qualifying for the 1972 World Championship, Fischer swept matches with Mark Taimanov and Bent Larsen by 6-0 scores. After another qualifying match against Tigran Petrosian, Fischer won the title match against Boris Spassky of the USSR, in Reykjavík, Iceland. Publicized as a Cold War confrontation between the US and USSR, the match attracted more worldwide interest than any chess championship before or since.

In 1975, Fischer refused to defend his title when an agreement could not be reached with FIDE, chess's international governing body, over the match conditions. As a result, the Soviet challenger Anatoly Karpov was named World Champion by default. Fischer subsequently disappeared from the public eye, though occasional reports of erratic behavior emerged. In 1992, he reemerged to win an unofficial rematch against Spassky. It was held in Yugoslavia, which was under a United Nations embargo at the time. His participation led to a conflict with the US government, which warned Fischer that his participation in the match would violate an executive order imposing US sanctions on Yugoslavia. The US government ultimately issued a warrant for his arrest. After that, Fischer lived as an émigré. In 2004, he was arrested in Japan and held for several months for using a passport that the US government had revoked. Eventually, he was granted an Icelandic passport and citizenship by a special act of the Icelandic Althing, allowing him to live there until his death in 2008.

Fischer made numerous lasting contributions to chess. His book My 60 Memorable Games, published in 1969, is regarded as essential reading in chess literature. In the 1990s, he patented a modified chess timing system that added a time increment after each move, now a standard practice in top tournament and match play. He also invented Fischer random chess, also known as Chess960, a chess variant in which the initial position of the pieces is randomized to one of 960 possible positions.

Fischer made numerous antisemitic statements and denied the Holocaust; his antisemitism, professed since at least the 1960s, was a major theme in his public and private remarks. There has been widespread comment and speculation concerning his psychological condition based on his extreme views and unusual behavior.

Bobby Fischer was born at Michael Reese Hospital in Chicago, Illinois, on March 9, 1943. His mother, Regina Wender Fischer, was a US citizen, born in Switzerland; her parents were Polish Jews. Raised in St. Louis, Missouri, Regina became a teacher, a registered nurse, and later a physician.

After graduating from college in her teens, Regina traveled to Germany to visit her brother. It was there she met geneticist and future Nobel Prize winner Hermann Joseph Muller, who persuaded her to move to Moscow to study medicine. She enrolled at I.M. Sechenov First Moscow State Medical University, where she met Hans-Gerhardt Fischer, also known as Gerardo Liebscher, a German biophysicist, whom she married in November 1933. In 1938, Hans-Gerhardt and Regina had a daughter, Joan Fischer. The reemergence of anti-Semitism under Stalin prompted Regina to go with Joan to Paris, where Regina became an English teacher. The threat of a German invasion led her and Joan to go to the United States in 1939. Regina and Hans-Gerhardt had already separated in Moscow, although they did not officially divorce until 1945.

At the time of her son's birth, Regina was homeless and shuttled to different jobs and schools around the country to support her family. She engaged in political activism and raised both Bobby and Joan as a single parent.

In 1949, Regina moved the family to Manhattan and the following year to Brooklyn, New York City, where she studied for her master's degree in nursing and subsequently began working in that field.

In 2002, Peter Nicholas and Clea Benson of The Philadelphia Inquirer published an investigative report which stated that Bobby Fischer's biological father was actually Paul Nemenyi. This was not confirmed by Fischer or his (by then deceased) mother. Nemenyi, a Hungarian mathematician and physicist of Jewish heritage, was considered an expert in fluid and applied mechanics. Benson and Nicholas continued their work and gathered additional evidence in court records, personal interviews, and even a summary of the FBI investigation written by J. Edgar Hoover, which confirmed their earlier conclusions.

Throughout the 1950s, the FBI investigated Regina and her circle due to her supposed communist views and due to her time living in Moscow. FBI files note that Hans-Gerhardt Fischer never entered the United States, while recording that Nemenyi took a keen interest in Fischer's upbringing. Not only were Regina and Nemenyi reported to have had an affair in 1942, but Nemenyi made monthly child support payments to Regina and paid for Bobby's schooling until his own death in 1952. Peter Nemenyi was reported to have told friends around him that Fischer was his half-brother while engaging in efforts to help Fischer after Paul died in 1952. 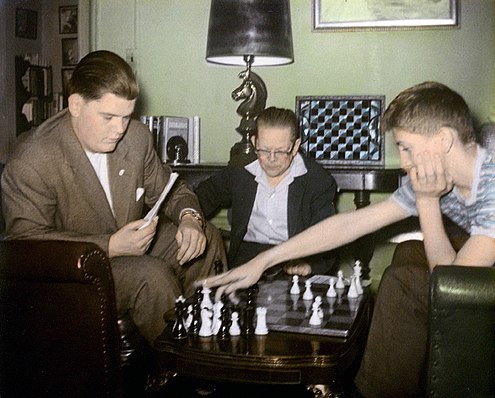 In March 1949, six-year-old Bobby and his sister Joan learned how to play chess using the instructions from a set bought at a candy store. When Joan lost interest in chess and Regina did not have time to play, Fischer was left to play many of his first games against himself. When the family vacationed at Patchogue, Long Island, New York, that summer, Bobby found a book of old chess games and studied it intensely.

In 1950, the family moved to Brooklyn, first to an apartment at the corner of Union Street and Franklin Avenue and later to a two-bedroom apartment at 560 Lincoln Place. It was there that "Fischer soon became so engrossed in the game that Regina feared he was spending too much time alone." As a result, on November 14, 1950, Regina sent a postcard to the Brooklyn Eagle newspaper, seeking to place an ad inquiring whether other children of Bobby's age might be interested in playing chess with him. The paper rejected her ad, because no one could figure out how to classify it, but forwarded her inquiry to Hermann Helms, the "Dean of American Chess", who told her that Master Max Pavey, former Scottish champion, would be giving a simultaneous exhibition on January 17, 1951. Fischer played in the exhibition. Although he held on for 15 minutes, drawing a crowd of onlookers, he eventually lost to the chess master.

One of the spectators was Brooklyn Chess Club President, Carmine Nigro, an American chess expert of near master strength and an instructor. Nigro was so impressed with Fischer's play that he introduced him to the club and began teaching him. Fischer noted of his time with Nigro: "Mr. Nigro was possibly not the best player in the world, but he was a very good teacher. Meeting him was probably a decisive factor in my going ahead with chess."

Nigro hosted Fischer's first chess tournament at his home in 1952. In the summer of 1955, Fischer, then 12 years old, joined the Manhattan Chess Club. Fischer's relationship with Nigro lasted until 1956, when Nigro moved away.

In June 1956, Fischer began attending the Hawthorne Chess Club, based in master John "Jack" W. Collins' home. Collins taught chess to children, and has been described as Fischer's teacher, but Collins himself suggested that he did not actually teach Fischer, and the relationship might be more accurately described as one of mentorship.

Fischer played thousands of blitz and offhand games with Collins and other strong players, studied the books in Collins' large chess library, and ate almost as many dinners at Collins' home as his own.

In March 1956, the Log Cabin Chess Club of West Orange, New Jersey (based in the home of the club's eccentric multi-millionaire founder and patron Elliot Forry Laucks), took Fischer on a tour to Cuba, where he gave a 12-board simultaneous exhibition at Havana's Capablanca Chess Club, winning ten games and drawing two. On this tour the club played a series of matches against other clubs. Fischer played second board, behind International Master Norman Whitaker. Whitaker and Fischer were the club's leading scorers, each scoring 5½ points out of 7 games.

In July 1956, Fischer won the US Junior Chess Championship, scoring 8½/10 at Philadelphia to become the youngest-ever Junior Champion at age 13. At the 1956 US Open Chess Championship in Oklahoma City, he scored 8½/12 to tie for 4th–8th places, with Arthur Bisguier winning. In the first Canadian Open Chess Championship at Montreal 1956, he scored 7/10 to tie for 8th–12th places, with Larry Evans winning. In November, Fischer played in the 1956 Eastern States Open Championship in Washington, D.C., tying for second with William Lombardy, Nicholas Rossolimo, and Arthur Feuerstein, with Hans Berliner taking first by a half-point.

Fischer accepted an invitation to play in the Third Lessing J. Rosenwald Trophy Tournament in New York City (1956), a premier tournament limited to the 12 players considered the best in the US. Playing against top opposition, the 13-year-old Fischer could only score 4½/11, tying for 8th–9th place. Yet he won the brilliancy prize for his game against International Master Donald Byrne, in which Fischer sacrificed his queen to unleash an unstoppable attack. Hans Kmoch called it "The Game of the Century", writing: "The following game, a stunning masterpiece of combination play performed by a boy of 13 against a formidable opponent, matches the finest on record in the history of chess prodigies." According to Frank Brady, "'The Game of the Century' has been talked about, analyzed, and admired for more than fifty years, and it will probably be a part of the canon of chess for many years to come." "In reflecting on his game a while after it occurred, Bobby was refreshingly modest: 'I just made the moves I thought were best. I was just lucky.'"

In 1957, Fischer played a two-game match against former World Champion Max Euwe at New York, losing ½–1½. When the US Chess Federation published its rating list in May, Fischer had the rank of Master, the youngest player to earn that title up to that point. In July, he successfully defended his US Junior title, scoring 8½/9 at San Francisco. In August, he scored 10/12 at the US Open Chess Championship in Cleveland, winning on tie-breaking points over Arthur Bisguier. This made Fischer the youngest ever US Open Champion. He won the New Jersey Open Championship, scoring 6½/7. He then defeated the young Filipino master Rodolfo Tan Cardoso 6–2 in a New York match sponsored by Pepsi-Cola.

Bobby Fischer was born in Chicago.

Title
Author
Date
Publisher
Description
The troubled genius of Bobby Fischer, who died this week 12 years ago
Dhruv Munjal
January 17, 2020
@bsindia
Its a staggering story, perhaps even more than his eventual victory over Spassky, which brought an end to the USSRs domination of world chess - a win for the free world over the oppressive Soviets