Biobots that could be injected into a patient’s bloodstream and destroy a blood clot or cancer would require sensing, computation and actuation. Living cells have an advantage over synthetic microswimmers in their ability to detect and respond to environmental stimuli without additional components. Bacteria and algae can be steered using their attraction to light, which is not possible in deep tissues of the body. Magnetic control is one possibility for medical applications since magnetic fields can safely penetrate the body. Magnetotactic bacteria naturally have magnetic nanocrystals and other living cells could be artificially magnetized if embedded with iron oxide nanoparticles or by attaching them to magnetic substrates. Chemicals can also control cell behavior. Biohybrid devices could respond to biochemical signals released from tumor cells. Thermotaxis and aerotaxis are also possible ways to steer microorganism-based biohybrid robots.

Researchers at Polytechnique Montréal demonstrated magnetic guiding of a magnetotactic bacteria bound to drug-containing nanoliposomes. These Magentococcus marinus bacteria also use aerotaxis, to migrate towards low oxygen in their natural environment. Since tumors are also low oxygen environments, the researchers demonstrated in mice that this aerotaxis can be exploited for delivering drugs to tumors.

Beating cells from a rat (ventricular cardiomyocytes) were first placed on poly(dimethylsiloxane) (PDMS) thin films in 2007 by Whitesides and Parker. This work defined a biohybrid soft robotic device as a hybrid device which has a soft body and where the actuation is performed by a living biological part. Soft biohybrid robots go beyond replication of nature, but seek to fulfill tasks that neither nature nor physical robots can achieve.

Professors Anne Staubitz and Christine Selhuber-Unkel at University of Bremen and University of Kiel proposed a taxonomic scheme for the concept of “living materials” used in biohybrid soft robotics. Their taxonomy builds on the taxonomy scheme put forth by Webster-Wood. 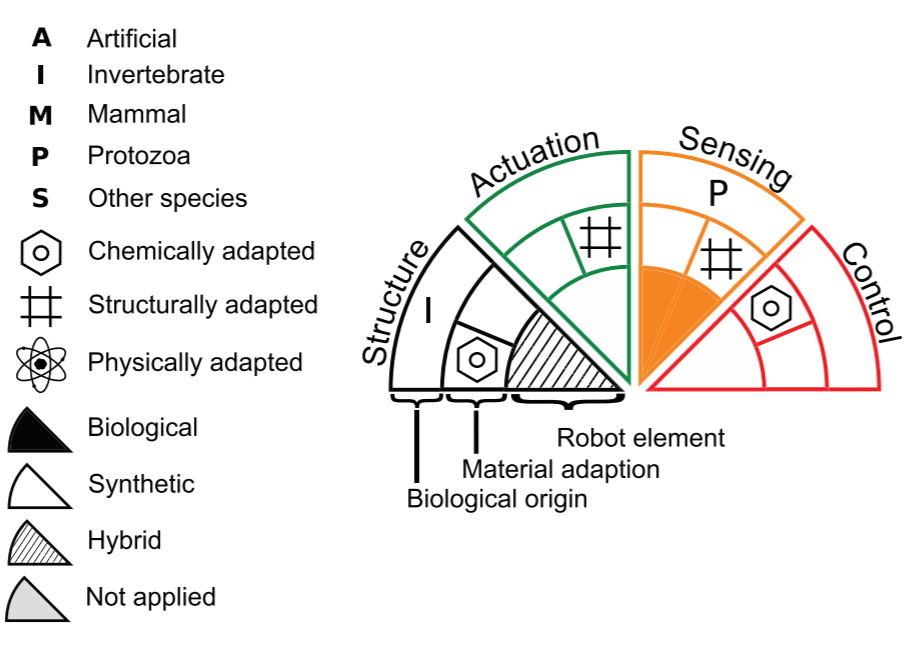 The following are examples of biohybrid soft robots described by the taxonomy scheme. The walker is a biobot actuated by a skeletal muscle ring modified for optogenetic control with light. The pump is a bio-micropump on a chip powered by earthworm muscle.

Researchers at University of Illinois developed soft robotic devices driven by neuromuscular tissue that triggers when stimulated by light using optogenetics, which was published in 2019 in PNAS. In 2014, the team developed self-propelled biohybrid swimming and walking biobots that uses cardiac muscle cells from rats, which beat on their own, as motors. Their swimming biobots were modeled after sperm, with a single tail. In the 2019 version, optogenetic neuron cells, derived from mouse stem cells, were added to their device with two tails. The biobots self assemble since neurons advanced towards the muscle and formed neuromuscular junctions. The resulting neuromuscular tissue worked with their synthetic biobot skeletons. Muscle activity is controlled by neuron activity, which is controlled by exposure to light using optogenetics.

"The synthetic components consist of 3D interconnected structures having a rotating unit that can capture individual bacteria into an array of microchambers so that cells contribute maximally to the applied torque. Bacterial cells are smooth swimmers expressing a light-driven proton pump that allows to optically control their swimming speed."

University of Illinois at Urbana-Champaign, MIT