Who is Billie Eilish?

Billie Eilish is an American singer and songwriter. She is best known for her successful debut single, Ocean Eyes. She was born and raised in Los Angeles, California. Belonging to a family of musicians, she was destined to make a career in performing arts. She joined a choir at the age of 8, and by the time she turned 11, she had begun writing and singing her own songs. Her elder brother, Finneas O’Connell, was the biggest influence in her life while she grew up. He had his own band and had written a song titled Ocean Eyes. Billie Eilish performed the song and released it online. It became a massive success. This turned out to be her first massive breakthrough. In 2017, her brother helped her record the single Bellyache. With the success of the song, Billie released her debut EP, Don’t Smile at Me, in August 2017. The EP appeared on several American and international music charts. In September 2017, Apple named her their newest Up Next artist. She then released her debut album When We All Fall Asleep, Where Do We Go? in March 2019, which was followed by Happier Than Ever, in July 2021. 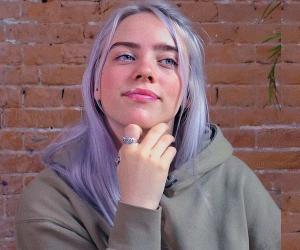 The song Ocean Eyes was recorded in Novemeber 2015. It was initially meant for Billie’s dance classes. She handed over the song to her dance teacher and meant it to be featured in her next dance routine. The song turned out to be good, and the siblings decided that it must be up on the music-sharing platform ‘SoundCloud.’

Several major record labels came ahead to buy the rights for the song. The song was released worldwide by ‘Darkroom’ and’ Interscope Records.’ It immediately became a critical and commercial success. Toward the end of the year, Billie Eilish released another single, Six Feet Under.

Inspired by the success of her debut single, Ocean Eyes, Billie Eilsih recorded four remixes of the song and compiled them all in an EP titled Ocean Eyes. All the remixes became big hits and gave Billie enough courage to carry on with her future projects.

In February 2017, Billie Eilish released the single, Bellyache, which was produced and co-written by her brother. The music video for the song, directed by Miles and AJ, was released in March 2017.

Billie Eilish then recorded a song titled Bored, which was included in the official soundtrack of the famous ‘Netflix’ series, 13 Reasons Why. Two more singles, Watch and Copycat, were subsequently released. In July 2017, Billie announced her highly awaited debut EP, Don’t Smile at Me.

The same year, she collaborated with Vince Staples and released a remix of her song Watch, which was renamed &Burn. In order to promote herself more, she went on two headlining tours: Don’t smile at me Tour in October 2017 and Where’s my mind Tour from February-April 2018.

She also collaborated with famous American singer Khalid and worked with him on a single titled Lovely, which was released in mid-2018. The song became immensely popular and made the producers of 13 Reasons Why’ buy its rights and feature it in the second season of the series.

In 2018, Billie Eilish released the singles Bitches Broken Hearts, and You Should See me in a Crown. She then released a single titled When the Party’s Over and later that year was featured in Forbes 30 Under 30.

Her much awaited debut album When We All Fall Asleep, Where Do We Go? was released on March 29, 2019. The album peaked at the Billboard 200 and UK albums chart making her the first millennial to achieve this feat in US and youngest female ever to have a number-one album in the UK.

In September 2019, she headed the Where Do We Go? World Tour but it got postponed due to the Covid-19 pandemic. In January 2020 she performed the title track on the 25th James Bond movie, No Time to Die, which was written and produced by her brother.

Her second studio album, Happier Than Ever was released on July 30, 2021 by Darkroom and Interscope Records. She hit the number-one spot at the Billboard 200 and UK album charts with her second album as well.

Title
Author
Date
Publisher
Description
'Cheugy,' 'omicron' among 2021's most mispronounced words
By WILLIAM J. KOLE
December 7, 2021
AP NEWS
"Cheugy" is apparently a lot to chew on. Grammy Award-winning singer-songwriter Billie Eilish and Philadelphia Eagles center Jason Kelce have something in common -- broadcasters butcher their names.
Book Haul Returns to Barnes & Noble Bigger and Better than Ever
August 13, 2021
WebWire
Barnes & Noble, Inc., today announced that its popular Book Haul Event is back, bigger and better than ever, starting today and running through Labor Day weekend. Customers can stock their shelves with half-off over 350 Hardcover books in stores and online at BN.com/bookhaul, while supplies last. "Book Haul is back, and we are so excited," said Jackie De Leo, Chief Merchandising Officer, Barnes & Noble. "Our Book Haul Event is one of the highlights of the year and both booksellers and c...
WhatsApp launches Billie Eilish animated sticker pack; Here's how to download it
July 31, 2021
HT Tech
WhatsApp's Billie Eilish animated sticker pack is called Happier Than Ever, after the American singer's newest studio album.
Something's In The Air Right Now... Billie Eilish Cinematic Concert Experience, "Happier Than Ever: A Love Letter To Los Angeles," To Premiere Exclusively On Disney+ Friday, September 3
July 23, 2021
WebWire
GRAMMY® Award-winning and chart-topping artist Billie Eilish will make her Disney+ debut with Happier than Ever: A Love Letter to Los Angeles, a cinematic concert experience, premiering globally on Friday, September 3. Fresh off the heels of her brand-new album, Happier than Ever, the Disney+ original will feature an intimate performance of every song in the album's sequential order - for the first and only time - from the stage of the legendary Hollywood Bowl. Happier Than Ever: A L...
NASA sends squid from Hawaii into space for research
Associated Press
June 21, 2021
news.yahoo.com
Dozens of baby squid from Hawaii are in space for study. The baby Hawaiian bobtail squid were raised at the University of Hawaii's Kewalo Marine Laboratory ...
SHOW MORE

Grammy Award for Record of the Year
...
Occupation