A washing machine (laundry machine, clothes washer, washer, or simply wash) is a home appliance used to wash laundry. The term is mostly applied to machines that use water as opposed to dry cleaning (which uses alternative cleaning fluids and is performed by specialist businesses) or ultrasonic cleaners. The user adds laundry detergent, which is sold in liquid or powder form, to the wash water. 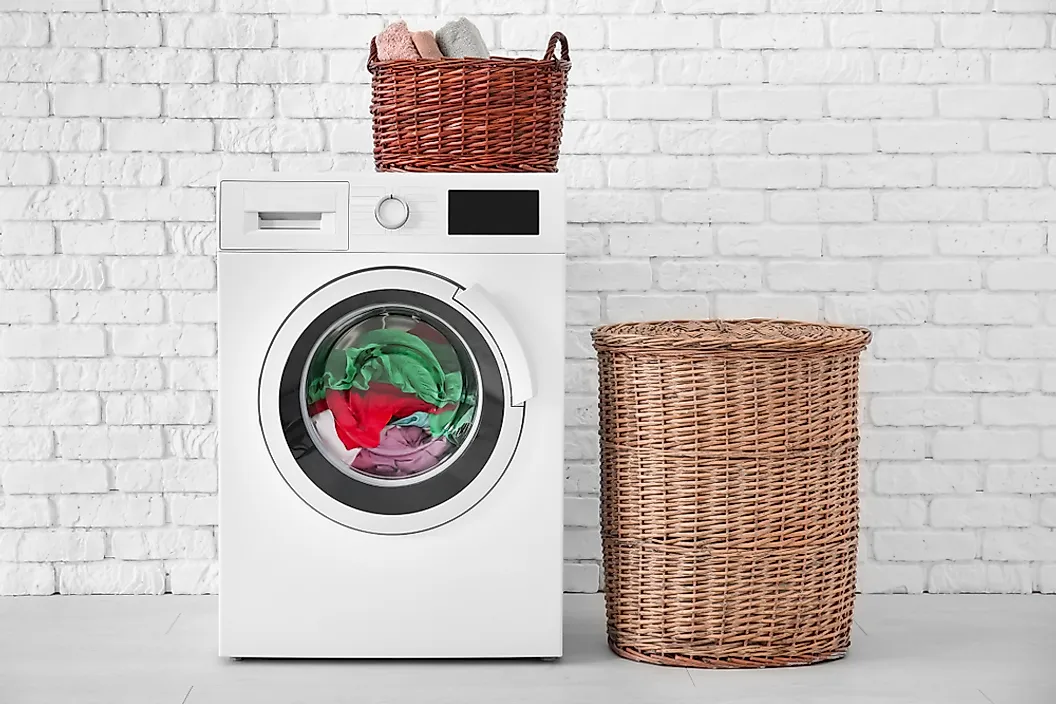 An early example of washing by machine is the practice of fulling. In a fulling mill, cloth was beaten with wooden hammers, known as fulling stocks or fulling hammers.

The first English patent under the category of washing machines was issued in 1691.A drawing of an early washing machine appeared in the January 1752 issue of The Gentleman's Magazine, a British publication. Jacob Christian Schäffer's washing machine design was published 1767 in Germany. In 1782, Henry Sidgier issued a British patent for a rotating drum washer, and in the 1790s Edward Beetham sold numerous "patent washing mills" in England. One of the first innovations in washing machine technology was the use of enclosed containers or basins that had grooves, fingers, or paddles to help with the scrubbing and rubbing of the clothes. The person using the washer would use a stick to press and rotate the clothes along the textured sides of the basin or container, agitating the clothes to remove dirt and mud. This crude agitator technology was hand-powered, but still more effective than actually hand-washing the clothes.

More advancements were made to washing machine technology in the form of the rotative drum design. Basically, these early design patents consisted of a drum washer that was hand-cranked to make the wooden drums rotate. While the technology was simple enough, it was a milestone in the history of washing machines, as it introduced the idea of "powered" washing drums. As metal drums started to replace the traditional wooden drums, it allowed for the drum to turn above an open fire or an enclosed fire chamber, raising the water temperature for more effective washes.

It would not be until the 19th century when steam power would be used in washing machine designs.

In 1862, a patented "compound rotary washing machine, with rollers for wringing or mangling" by Richard Lansdale of Pendleton, Manchester, was shown at the 1862 London Exhibition.

The first United States Patent titled "Clothes Washing" was granted to Nathaniel Briggs of New Hampshire in 1797. Because of the Patent Office fire in 1836, no description of the device survives. Invention of a washing machine is also attributed to Watervliet Shaker Village, as a patent was issued to an Amos Larcom of Watervliet, New York, in 1829, but it is not certain that Larcom was a Shaker. A device that combined a washing machine with a wringer mechanism did not appear until 1843, when Canadian John E. Turnbull of Saint John, New Brunswick patented a "Clothes Washer With Wringer Rolls." During the 1850s, Nicholas Bennett from the Mount Lebanon Shaker Society at New Lebanon, New York, invented a "wash mill", but in 1858 he assigned the patent to David Parker of the Canterbury Shaker Village, where it was registered as the "Improved Washing Machine". 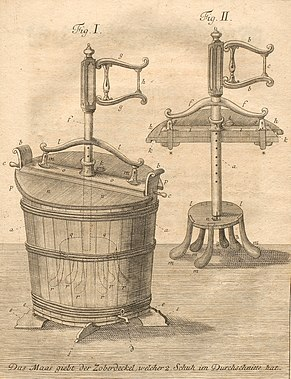 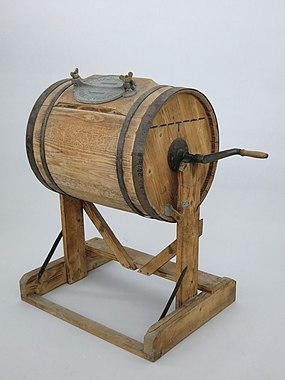 Bendix Home Appliances, a subsidiary of Avco, introduced the first domestic automatic washing machine in 1937, having applied for a patent in the same year. Avco had licensed the name from Bendix Corporation, an otherwise unrelated company. In appearance and mechanical detail, this first machine was not unlike the front loading automatic washers produced today.

Although it included many of today's basic features, the machine lacked any drum suspension and therefore had to be anchored to the floor to prevent "walking". Because of the components required, the machine was also very expensive. For instance, the Bendix Home Laundry Service Manual (published November 1, 1946) shows that the drum speed change was facilitated by a 2-speed gearbox built to a heavy duty standard (not unlike a car automatic gearbox, albeit at a smaller size). The timer was also probably fairly costly, because miniature electric motors were expensive to produce.

Many of the early automatic machines had coin-in-the-slot facilities and were installed in the basement laundry rooms of apartment houses.

Over time manufacturers of automatic washers have gone to great lengths to reduce cost. For instance, expensive gearboxes are no longer required, since motor speed can be controlled electronically. Some models can be controlled via WiFi, and have angled drums to facilitate loading.

Even on some expensive washers, the outer drum of front loading machines is often (but not always) made of plastic (it can also be made out of metal but this is expensive). This makes changing the main bearings difficult, as the plastic drum usually cannot be separated into two halves to enable the inner drum to be removed to gain access to the bearing.

Many residential front-loading washing machines typically have a 25 kg concrete block to dampen vibration. Alternatives include a plastic counterweight that can be filled with water after delivery, reducing or controlling motor speeds, using hydraulic suspensions instead of spring suspensions, and having freely moving steel balls or liquid contained inside a ring mounted on both the top and bottom of the drum in order to counter the weight of the clothes and reduce vibration.

Some machines, since 1998 now use a BLDC motor directly connected to the basket (direct drive), where the stator assembly is attached to the rear of the outer drum, whilst the co-axial rotor is mounted on the shaft of the inner drum. The BLDC motor eliminates the need for a pulley, belt and belt tensioner. It was invented by Fisher and Paykel in 1998 and patents were granted in the US in 2010. Since, other manufacturers have followed suit. Some washing machines with this type of motor now come with 10-year warranties. The BLDC motor used is always an outrunner because it is has a slim design with variable speed and high torque. The rotor is connected to the inner tub through its center. It can be made out of metal or plastic.

that very first Millet washing machine was designed based on the principle of the churn.
The real revolution in the development of washing machines occurred in 1908. Then the American Alv Fisher managed not only to improve the unit, but also to completely mechanize the washing process. He supplied his invention with an electric motor as a drive. However, advanced technical characteristics were unable to ensure safety: the machine had open working mechanisms. But this did not stop those who wanted to finally "free their hands" during the wash.
The creator of the first washing machine is James King from America, who patented his invention in 1851.

How a Washing Machine Works

The history of the washing machine