The upper limbs or upper extremities are the forelimbs of an upright-postured tetrapod vertebrate, extending from the scapulae and clavicles down to and including the digits, including all the musculatures and ligaments involved with the shoulder, elbow, wrist and knuckle joints. In humans, each upper limb is divided into the arm, forearm and hand, and is primarily used for climbing, lifting and manipulating objects.

In formal usage, the term "arm" only refers to the structures from the shoulder to the elbow, explicitly excluding the forearm, and thus "upper limb" and "arm" are not synonymous. However, in casual usage, the terms are often used interchangeably. The term "upper arm" is redundant in anatomy, but in informal usage is used to distinguish between the two terms.

In the human body the muscles of the upper limb can be classified by origin, topography, function, or innervation. While a grouping by innervation reveals embryological and phylogenetic origins, the functional-topographical classification below reflects the similarity in action between muscles (with the exception of the shoulder girdle, where muscles with similar action can vary considerably in their location and orientation.[3] 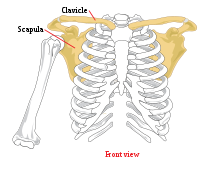 Bones of the shoulder girdle

The shoulder girdle or pectoral girdle, composed of the clavicle and the scapula, connects the upper limb to the axial skeleton through the sternoclavicular joint (the only joint in the upper limb that directly articulates with the trunk), a ball and socket joint supported by the subclavius muscle which acts as a dynamic ligament. While this muscle prevents dislocation in the joint, strong forces tend to break the clavicle instead. The acromioclavicular joint, the joint between the acromion process on the scapula and the clavicle, is similarly strengthened by strong ligaments, especially the coracoclavicular ligament which prevents excessive lateral and medial movements. Between them these two joints allow a wide range of movements for the shoulder girdle, much because of the lack of a bone-to-bone contact between the scapula and the axial skeleton. The pelvic girdle is, in contrast, firmly fixed to the axial skeleton, which increases stability and load-bearing capabilities.

The mobility of the shoulder girdle is supported by a large number of muscles. The most important of these are muscular sheets rather than fusiform or strap-shaped muscles and they thus never act in isolation but with some fibres acting in coordination with fibres in other muscles. 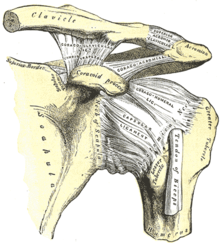 The glenohumeral joint (colloquially called the shoulder joint) is the highly mobile ball and socket joint between the glenoid cavity of the scapula and the head of the humerus. Lacking the passive stabilisation offered by ligaments in other joints, the glenohumeral joint is actively stabilised by the rotator cuff, a group of short muscles stretching from the scapula to the humerus. Little inferior support is available to the joint and dislocation of the shoulder almost exclusively occurs in this direction. [6]

The large muscles acting at this joint perform multiple actions and seemingly simple movements are often the result of composite antagonist and protagonist actions from several muscles. For example, pectoralis major is the most important arm flexor and latissimus dorsi the most important extensor at the glenohumeral joint, but, acting together, these two muscles cancel each other's action leaving only their combined medial rotation component. On the other hand, to achieve pure flexion at the joint the deltoid and supraspinatus must cancel the adduction component and the teres minor and infraspinatus the medial rotation component of pectoralis major. Similarly, abduction (moving the arm away from the body) is performed by different muscles at different stages. The first 10° is performed entirely by the supraspinatus, but beyond that fibres of the much stronger deltoid are in position to take over the work until 90°. To achieve the full 180° range of abduction the arm must be rotated medially and the scapula most be rotated about itself to direct the glenoid cavity upward. [6]

Superficial muscles of the arm

The arm proper (brachium), sometimes called the upper arm,[4] the region between the shoulder and the elbow, is composed of the humerus with the elbow joint at its distal end.

The elbow joint is a complex of three joints — the humeroradial, humeroulnar, and superior radioulnar joints — the former two allowing flexion and extension whilst the latter, together with its inferior namesake, allows supination and pronation at the wrist. Triceps is the major extensor and brachialis and biceps the major flexors. Biceps is, however, the major supinator and while performing this action it ceases to be an effective flexor at the elbow. [7]

Ventral superficial muscles of the forearm

The forearm (Latin: antebrachium),[4] composed of the radius and ulna; the latter is the main distal part of the elbow joint, while the former composes the main proximal part of the wrist joint.

Most of the large number of muscles in the forearm are divided into the wrist, hand, and finger extensors on the dorsal side (back of hand) and the ditto flexors in the superficial layers on the ventral side (side of palm). These muscles are attached to either the lateral or medial epicondyle of the humerus. They thus act on the elbow, but, because their origins are located close to the centre of rotation of the elbow, they mainly act distally at the wrist and hand. Exceptions to this simple division are brachioradialis — a strong elbow flexor — and palmaris longus — a weak wrist flexor which mainly acts to tense the palmar aponeurosis. The deeper flexor muscles are extrinsic hand muscles; strong flexors at the finger joints used to produce the important power grip of the hand, whilst forced extension is less useful and the corresponding extensor thus are much weaker. [8]

Biceps is the major supinator (drive a screw in with the right arm) and pronator teres and pronator quadratus the major pronators (unscrewing) — the latter two role the radius around the ulna (hence the name of the first bone) and the former reverses this action assisted by supinator. Because biceps is much stronger than its opponents, supination is a stronger action than pronation (hence the direction of screws). [8]

How muscles act on the wrist is complex to describe. The five muscles acting on the wrist directly — flexor carpi radialis, flexor carpi ulnaris, extensor carpi radialis, extensor carpi ulnaris, and palmaris longus — are accompanied by the tendons of the extrinsic hand muscles (i.e. the muscles acting on the fingers). Thus, every movement at the wrist is the work of a group of muscles; because the four primary wrist muscles (FCR, FCU, ECR, and ECU) are attached to the four corners of the wrist, they also produce a secondary movement (i.e. ulnar or radial deviation). To produce pure flexion or extension at the wrist, these muscle therefore must act in pairs to cancel out each other's secondary action. On the other hand, finger movements without the corresponding wrist movements require the wrist muscles to cancel out the contribution from the extrinsic hand muscles at the wrist. [9]

Bones of the hand

Of the joints between the carpus and metacarpus, the carpometacarpal joints, only the saddle-shaped joint of the thumb offers a high degree of mobility while the opposite is true for the metacarpophalangeal joints. The joints of the fingers are simple hinge joints. [9]

The primary role of the hand itself is grasping and manipulation; tasks for which the hand has been adapted to two main grips — power grip and precision grip. In a power grip an object is held against the palm and in a precision grip an object is held with the fingers, both grips are performed by intrinsic and extrinsic hand muscles together. Most importantly, the relatively strong thenar muscles of the thumb and the thumb's flexible first joint allow the special opposition movement that brings the distal thumb pad in direct contact with the distal pads of the other four digits. Opposition is a complex combination of thumb flexion and abduction that also requires the thumb to be rotated 90° about its own axis. Without this complex movement, humans would not be able to perform a precision grip. [10]

In addition, the central group of intrinsic hand muscles give important contributions to human dexterity. The palmar and dorsal interossei adduct and abduct at the MCP joints and are important in pinching. The lumbricals, attached to the tendons of the flexor digitorum profundus (FDP) and extensor digitorum communis (FDC), flex the MCP joints while extending the IP joints and allow a smooth transfer of forces between these two muscles while extending and flexing the fingers. [10]

The motor and sensory supply of the upper limb is provided by the brachial plexus which is formed by the ventral rami of spinal nerves C5-T1. In the posterior triangle of the neck these rami form three trunks from which fibers enter the axilla region (armpit) to innervate the muscles of the anterior and posterior compartments of the limb. In the axilla, cords are formed to split into branches, including the five terminal branches listed below. [11] The muscles of the upper limb are innervated segmentally proximal to distal so that the proximal muscles are innervated by higher segments (C5–C6) and the distal muscles are innervated by lower segments (C8–T1). [12]

Motor innervation of upper limb by the five terminal nerves of the brachial plexus:[12]

The musculocutaneous nerve innervates all the muscles of the anterior compartment of the arm.

The median nerve innervates all the muscles of the anterior compartment of the forearm except flexor carpi ulnaris and the ulnar part of the flexor digitorum profundus. It also innervates the three thenar muscles and the first and second lumbricals.

The ulnar nerve innervates the muscles of the forearm and hand not innervated by the median nerve.

The axillary nerve innervates the deltoid and teres minor.

Collateral branches of the brachial plexus:[12]

Arteries of the upper limb:

ulnar, nutrient and muscular branches of the brachial artery.

Veins of the upper limb.

Veins of the upper limb:

As for the upper limb blood supply, there are many anatomical variations.