Member of the guitar family

A ukulele is a miniature four-stringed ukulele. Translated from Hawaiian, "ukulele" is a jumping flea. The ukulele is common on various Pacific islands, but is associated primarily with Hawaiian music.

The ukulele (/ˌjuːkəˈleɪli/ YOO-kə-LAY-lee; from Hawaiian: ʻukulele [ˈʔukuˈlɛlɛ], approximately OO-koo-LEH-leh) is a member of the lute family of instruments of Portuguese origin and popularized in Hawaii. It generally employs four nylon strings.

The tone and volume of the instrument vary with size and construction. Ukuleles commonly come in four sizes: soprano, concert, tenor, and baritone. 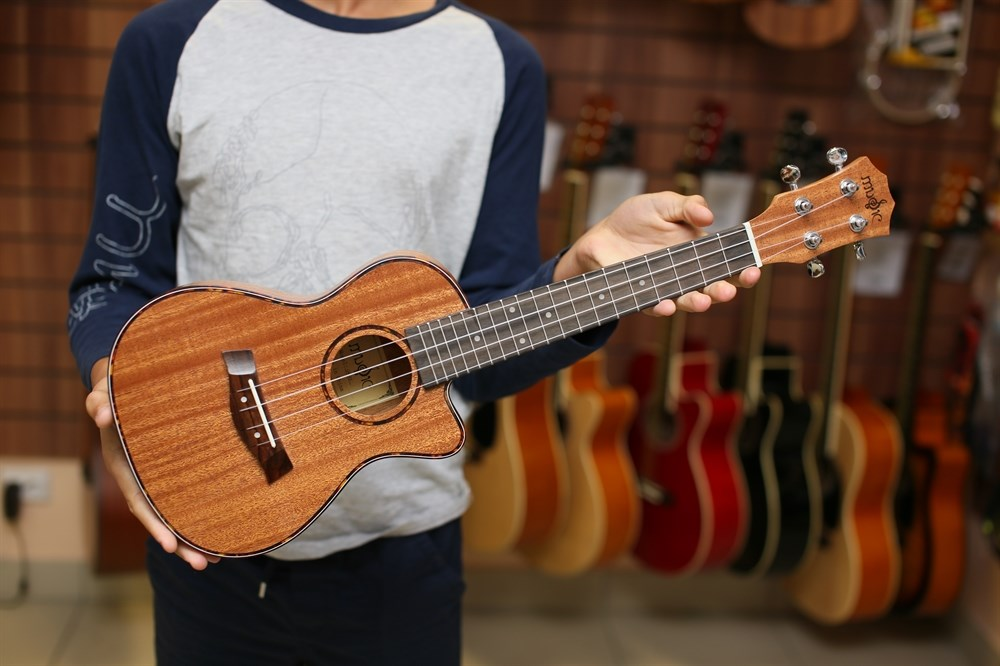 The ukulele is commonly associated with music from Hawaii, where its name roughly translates as "jumping flea", perhaps because of the movement of the player's fingers. Legend attributes it to the nickname of Englishman Edward William Purvis, one of King Kalākaua's officers, because of his small size, fidgety manner, and playing expertise. One of the earliest appearances of the word ukulele in print (in the sense of a stringed instrument) is in the Metropolitan Museum of Art's Catalogue of the Crosby Brown Collection of Musical Instruments of All Nations published in 1907. The catalog describes two ukuleles from Hawaii - one that is similar in size to a modern soprano ukulele, and one that is similar to a tenor. 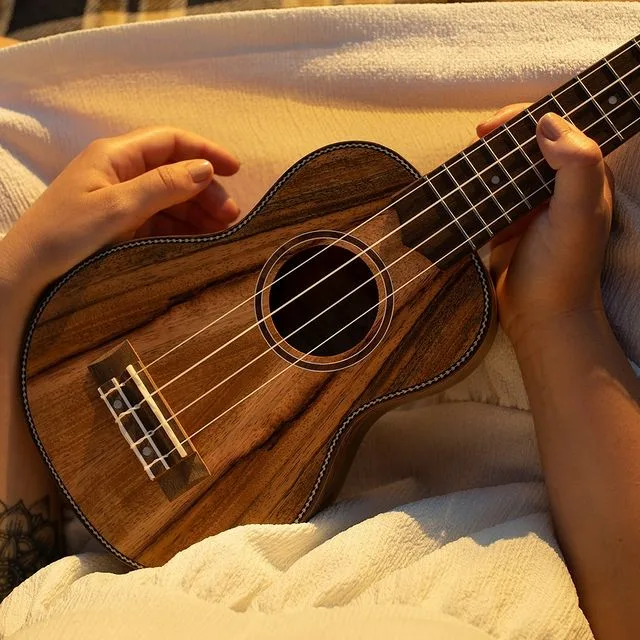 Developed in the 1880s, the ukulele is based on several small, guitar-like instruments of Portuguese origin, the machete, cavaquinho, timple, and rajão, introduced to the Hawaiian Islands by Portuguese immigrants from Madeira, the Azores and Cape Verde. Three immigrants in particular, Madeiran cabinet makers Manuel Nunes, José do Espírito Santo, and Augusto Dias, are generally credited as the first ukulele makers. Two weeks after they disembarked from the SS Ravenscrag in late August 1879, the Hawaiian Gazette reported that "Madeira Islanders recently arrived here, have been delighting the people with nightly street concerts."

One of the most important factors in establishing the ukulele in Hawaiian music and culture was the ardent support and promotion of the instrument by King Kalākaua. A patron of the arts, he incorporated it into performances at royal gatherings.

In the 1960s, educator J. Chalmers Doane dramatically changed school music programs across Canada, using the ukulele as an inexpensive and practical teaching instrument to foster musical literacy in the classroom. 50,000 schoolchildren and adults learned ukulele through the Doane program at its peak. "Ukulele in the Classroom", a revised program created by James Hill and Doane in 2008 is a staple of music education in Canada.

The ukulele arrived in Japan in 1929 after Hawaiian-born Yukihiko Haida returned to the country upon his father's death, and introduced the instrument. Haida and his brother Katsuhiko formed the Moana Glee Club, enjoying rapid success in an environment of growing enthusiasm for Western popular music, particularly Hawaiian and jazz. During World War II, authorities banned most Western music, but fans and players kept it alive in secret, and it resumed popularity after the war. In 1959, Haida founded the Nihon Ukulele Association. Today, Japan is considered a second home for Hawaiian musicians and ukulele virtuosos.

The sound depends on the size of the instrument, so it is important to choose the most suitable option for you. There are four types of ukulele.

The soprano ukulele is the most common type. The smallest ukulele, the sound of which is considered classic. Ukuleles of this type are cheaper than others, so beginners often choose sopranos. The length of such a ukulele is on average 53 cm, the number of frets is 12-14. 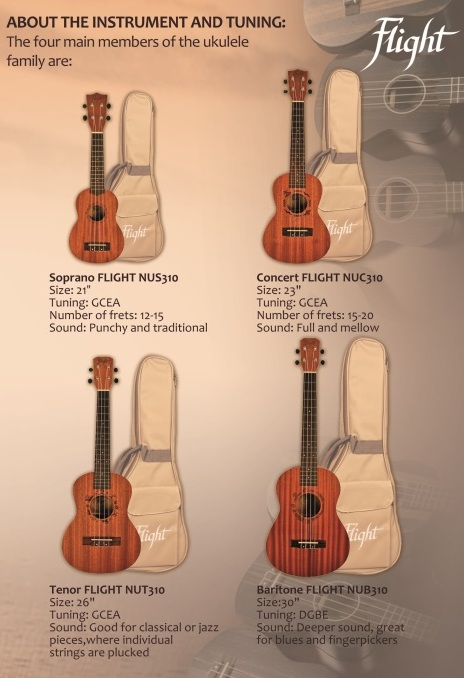 The alto ukulele (or concert ukulele) is the next largest instrument after the soprano. The length is about 58 cm, the number of frets is 15-20. This type of ukulele is preferred by people with large hands. Ukuleles of this type also have a deeper sound than soprano ukuleles.

Tenor-ukulele, the length of which is about 66 cm; the number of frets – from 15. Its sound is even deeper than that of a concert ukulele, and it allows you to extract even more sounds due to a longer neck.

The baritone is a ukulele, the length of which is from 76 cm, and on the neck of which there are 19 frets or more. The baritone ukulele is tuned in the same way as the guitar on the four lower strings, which makes these two instruments very similar. Due to the impressive size, instruments of this type no longer have the classical sound of a ukulele, but a baritone ukulele will suit you if you need a truly deep and rich sound. 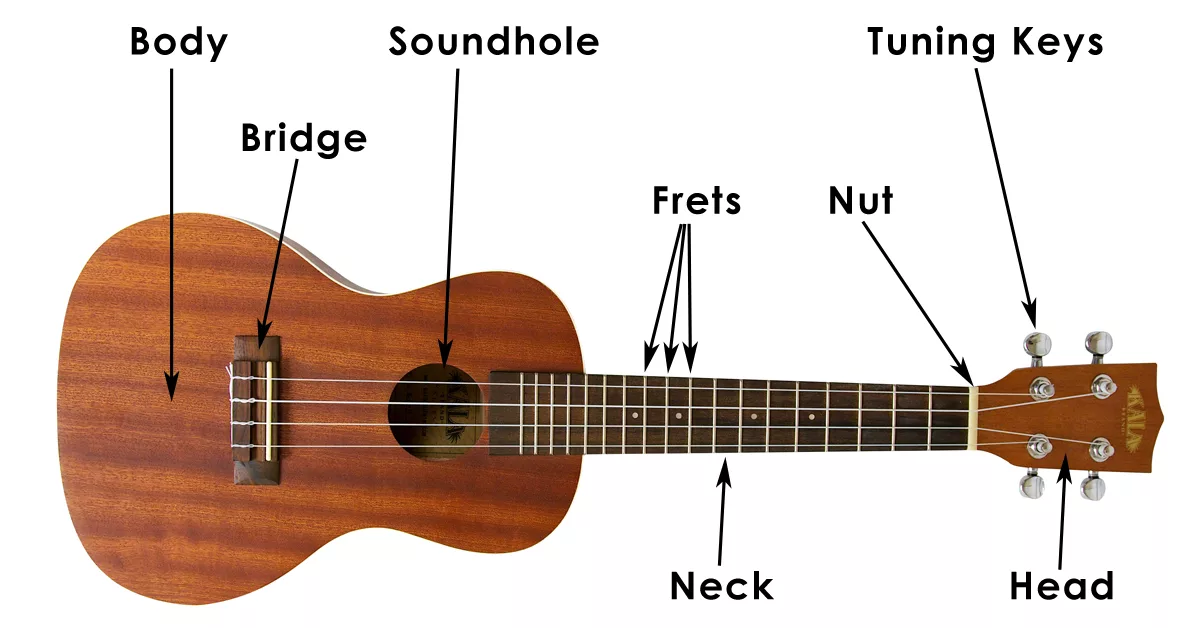 The structure of the ukulele is slightly different from a guitar or other stringed musical instrument. Component parts of the tool:

The case is wooden, hollow, has a small hole under the strings - a socket.

The neck is an oblong wooden "neck" of the instrument, the upper and flat surface of the neck is called an overlay.

Frets are sections of the fingerboard, separated by metal thresholds. Each fret has its own note for each string.

The head of the neck is the part of the mane on which the pegs are located.

Carmen / Phantom of the Opera on Ukulele