Ufa is a city in Russia and is the capital of the Republic of Bashkortostan.

Ufa is a large Russian city located in the autonomous Republic of Bashkortostan. It is located in the southwestern part of Russia and has a population of over 1,100,000 people. The majority of the people who live in the city are from Russian, Tartar, and Bashkir backgrounds, and the dominant religion in the region is Islam. Ufa has been an important city since its official founding in 1574 due to its location along the Belaya River, where it intersects with the Ufa River, allowing for the city to be an optimal place for maritime trading routes. Centuries later, the city continued to be important for trade routes with the advent of railroads, road lines, and oil and gas pipelines running through the city. Ufa is the home of manufacturing for several industries, such as mining machinery, furniture, and food.

Although the city was officially founded in 1574 by a relative of Ivan the Terrible called Ivan Nagoy, there is evidence of people being there dating 15,000 years ago with art on the walls in the caves at the Shulgan Tash Nature Preserve. It is said by the Bashkir people that the region was the site of a major city from their history with the name Turatav. The town was built up by the Russians in the 1500s while being attacked by the original inhabitants, the Bashkirs. A fortress was built around the town to protect it as it grew into city status in the same century. Throughout the next several centuries, the city grew with towers, churches, and houses being built. In 1890, the Samara-Zlatoust railroad was built through the city, bringing in more business and trade opportunities.

The growth of the city slowed during World War I but rebounded when the first oil was produced in the region in 1932. Ufa was integral for Russia during World War II, as it had become a manufacturing city and a huge industrial center. In 1990, the entire region was given the declaration of State Sovereignty by the Supreme Soviet, and Ufa was officially named the capital of the Republic of Bashkortostan in 1992.

There are many sites to see in Ufa that show the history of the diverse city and its people of Bashkir, Tartar, and Russian descent. Below is a list of a few of those sites: 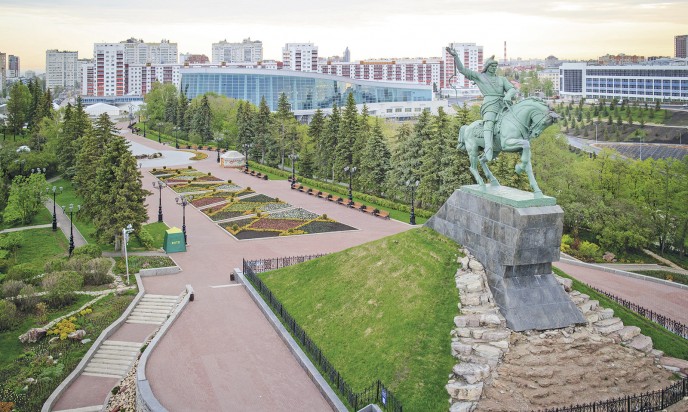 Ufa is named the capital of republic of Bashkortostan.
Ufa receives status of a city.
Ufa is founded.

Where is Ufa, the Republic of Bashkortostan, Russia on Map Lat Long Coordinates