An electrical device that transfers energy through electromagnetic induction

A transformer is a passive component that transfers electrical energy from one electrical circuit to another circuit, or multiple circuits. A varying current in any coil of the transformer produces a varying magnetic flux in the transformer's core, which induces a varying electromotive force across any other coils wound around the same core. Electrical energy can be transferred between separate coils without a metallic (conductive) connection between the two circuits. Faraday's law of induction, discovered in 1831, describes the induced voltage effect in any coil due to a changing magnetic flux encircled by the coil. 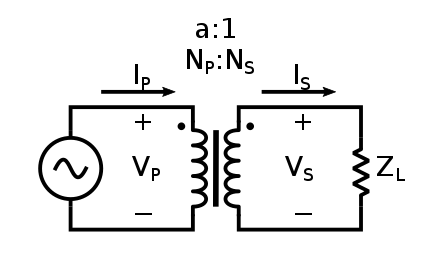 Ideal transformer connected with source VP on primary and load impedance ZL on secondary, where 0 < ZL < ∞. 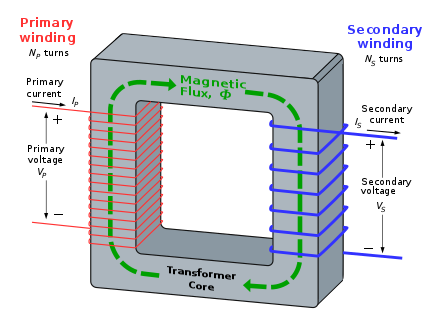 According to Faraday's law, since the same magnetic flux passes through both the primary and secondary windings in an ideal transformer, a voltage is induced in each winding proportional to its number of windings. The transformer winding voltage ratio is directly proportional to the winding turns ratio.[7]

The ideal transformer identity is a reasonable approximation for the typical commercial transformer, with voltage ratio and winding turns ratio both being inversely proportional to the corresponding current ratio.