Planetary system of the sun

The Solar System is a planetary system that includes a central star - called the Sun - and all natural space objects (planets, asteroids, comets, stone and ice objects, etc.) revolving around the Sun. The solar system was formed by gravitational compression of a gas and dust cloud about 4.57 billion years ago! 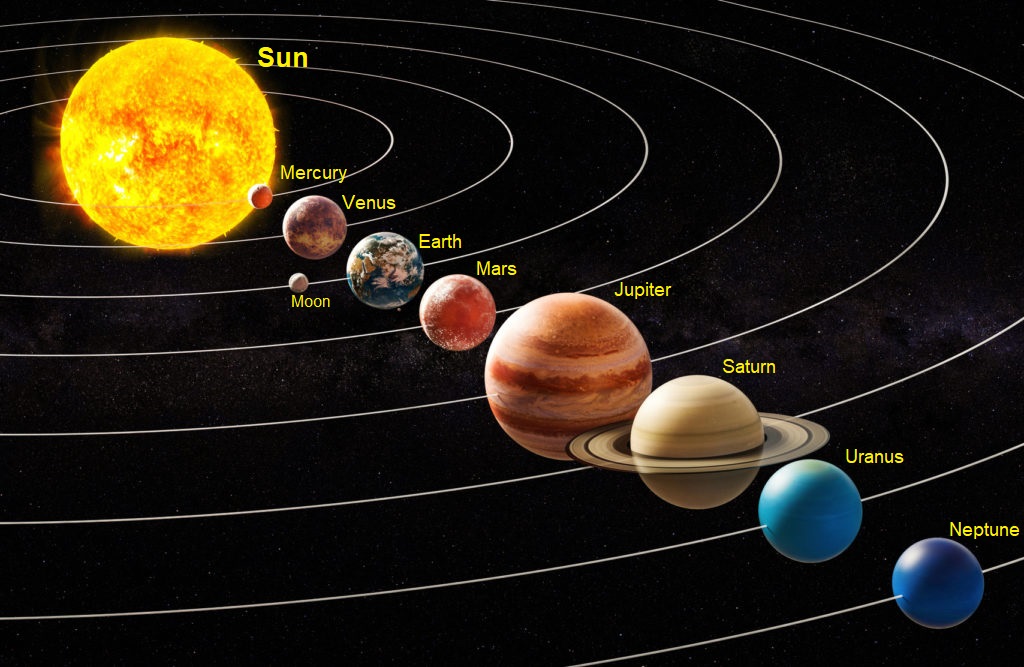 A simple model of the solar system(distance between objects abstract) 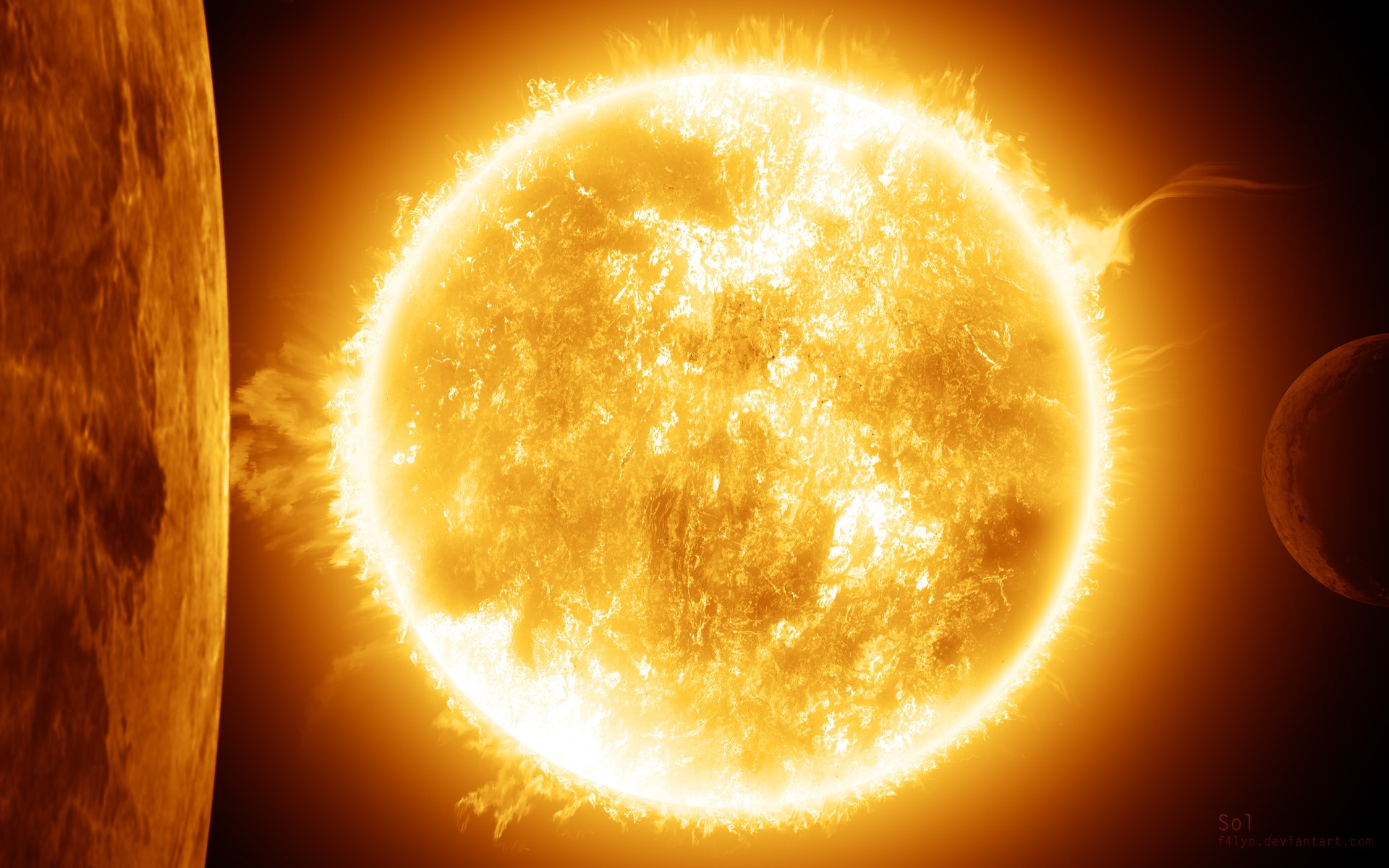 Mercury is the closest planet to the Sun in the solar system, the smallest of the terrestrial planets, its diameter is 4879 km. Named after the ancient Roman god of commerce, Mercury is fast because it moves faster than other planets. Its period of revolution around the Sun is only 87.97 Earth days - the shortest among all the planets in the solar system. At the same time, the rotation speed around its axis is 176 days, i.e. One day on Mercury is equal to 176 Earth days! The distance to the Sun is 58 million km. 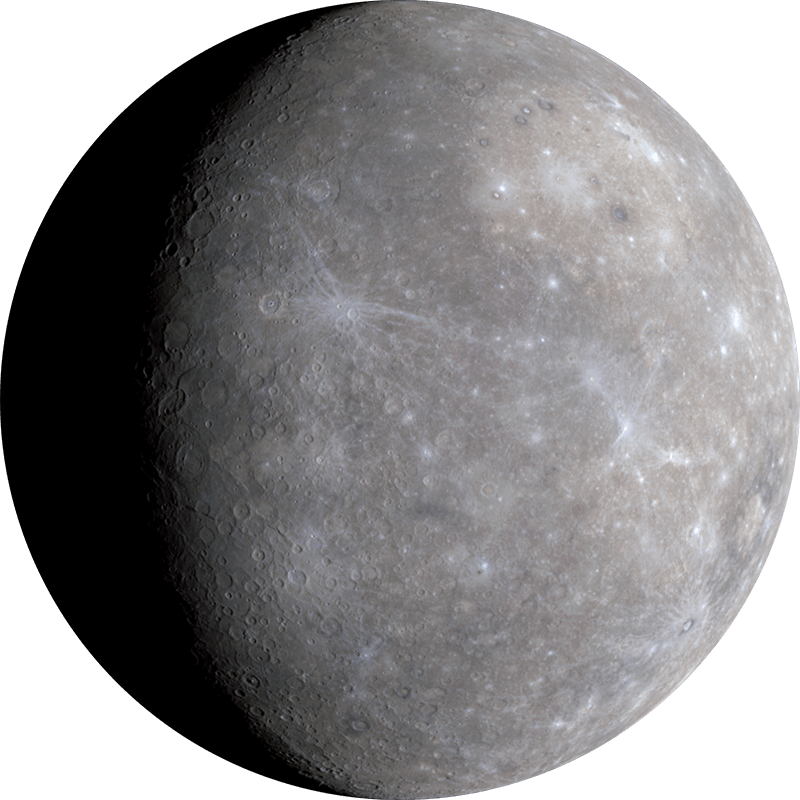 Venus is the second farthest from the Sun and the sixth largest planet in the solar system, named after the ancient Roman goddess of love Venus. Venus is considered the "sister" of the Earth, because they are similar in mass and size. The Venusian year is 224.7 Earth days. It has the longest period of rotation around its axis (about 243 Earth days) among all the planets in the solar system and rotates in the opposite direction to the rotation of most planets. The diameter of Venus is 12,104 km, Venus revolves around the Sun in 225 days at a speed of 35.02 km/s. Venus is the hottest planet in the solar system, with temperatures reaching 462°C. The distance to the Sun is 108 million km. 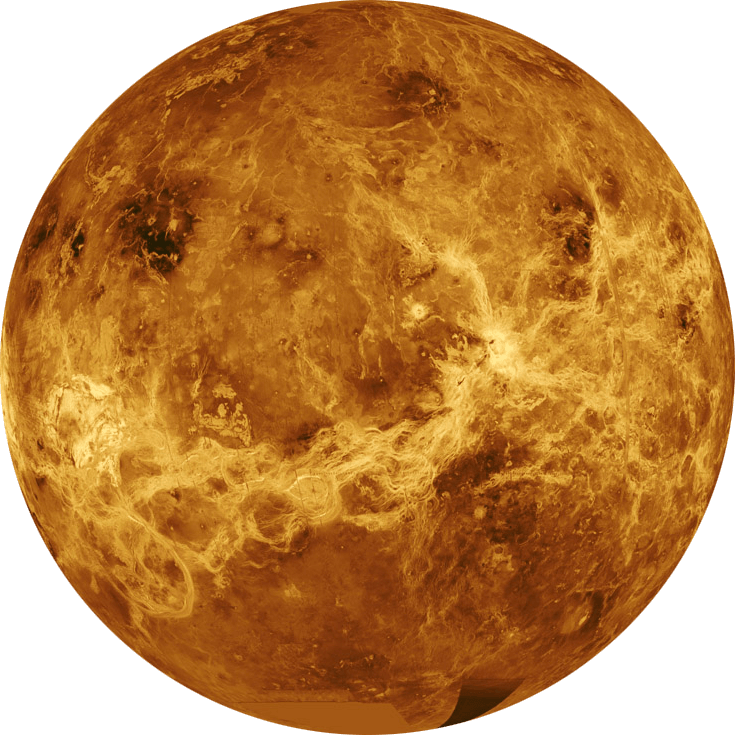 Earth is the third planet from the Sun in the solar system. The densest, the fifth in diameter and mass among all the planets and the largest among the terrestrial planets, which also includes Mercury, Venus and Mars. The only body currently known to man in the universe, inhabited by living organisms. Scientific evidence indicates that the Earth formed from the solar nebula about 4.54 billion years ago, and shortly thereafter acquired its only natural satellite, the Moon. Life is believed to have appeared on Earth about 4.25 billion years ago. Approximately 70.8% of the planet's surface is occupied by the World Ocean, the rest of the surface is occupied by continents and islands. The planet is home to approximately 8.7 million species of living beings, including humans. The diameter of the Earth is 12,742 km, the Earth rotates around the Sun in 365 days at a speed of 29.78 km/s. The distance to the Sun is 149 million km. 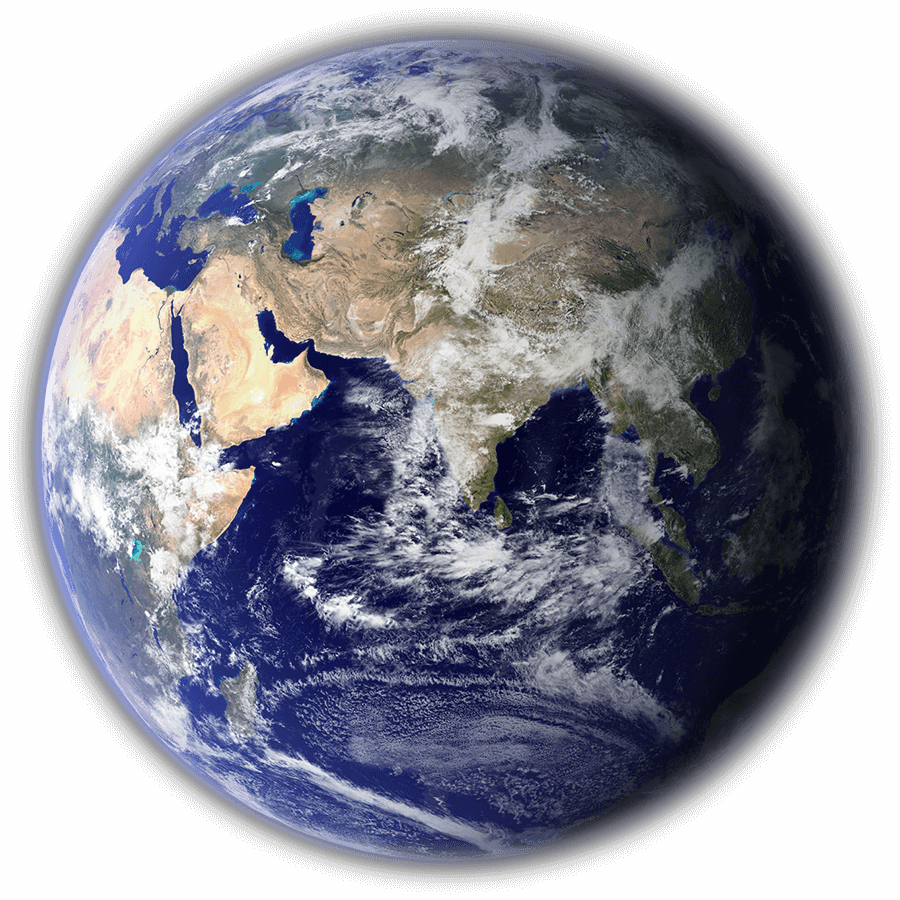 Mars is the fourth largest planet from the Sun and the seventh largest planet in the solar system; the mass of the planet is 10.7% of the mass of the Earth. The planet is named after Mars, the ancient Roman god of war. Mars is also called the "red planet" because of the reddish hue of the surface. The relief of Mars has many unique features. The Martian extinct volcano Mount Olympus is the highest known mountain on the planets of the solar system. Mars is the most explored planet in our solar system (besides Earth). The diameter of Mars is 6,740 km, Mars rotates around the Sun in 687 days at a speed of 24.13 km/s. The distance to the Sun is 228 million km. 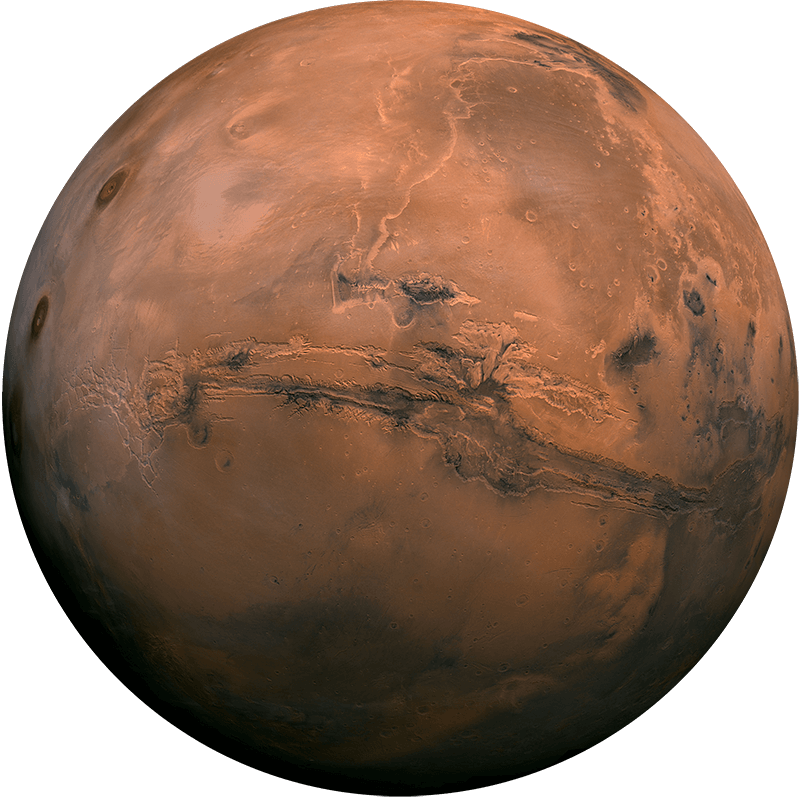 Jupiter is the largest planet in the solar system and the fifth furthest from the sun. Along with Saturn, Uranus and Neptune, Jupiter is classified as a gas giant. A number of atmospheric phenomena on Jupiter: storms, lightning, auroras have scales that are much greater than those on Earth. The most notable formation in the planet's atmosphere is the Great Red Spot, a giant storm known since the 17th century. Jupiter has approximately 80 satellites, the largest of which are Io, Europa, Ganymede and Callisto. Jupiter is the fastest planet on its axis, only 10 hours. Whereas, to go around the Sun at a speed of 13.07 km/s, Jupiter will need 11.9 years. The diameter of Jupiter is 142,984 km, the distance to the Sun is 778 million km. 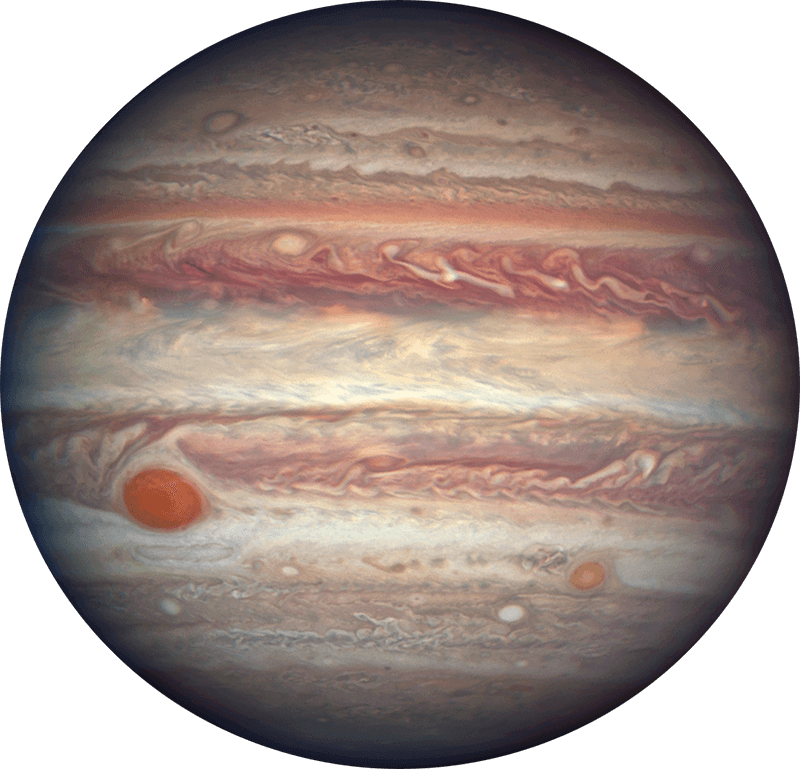 Saturn is the sixth planet from the Sun and the second largest planet in the solar system after Jupiter. Saturn is a gas giant. Saturn is named after the Roman god of agriculture. Saturn is mostly made up of hydrogen, with some helium and traces of water, methane, ammonia, and heavy elements. The wind speed on Saturn can reach 1800 km/h in places, which is much more than on Jupiter. Saturn has a prominent ring system made up mostly of ice particles. There are 82 currently known satellites orbiting the planet, Titan is the largest of them, as well as the second largest satellite in the solar system. Saturn is the lowest density planet in the solar system. The diameter of Saturn is 120,536 km, around the Sun Saturn rotates in 29.5 years, at a speed of 9.69 km/s. The distance to the Sun is 1426 million km. 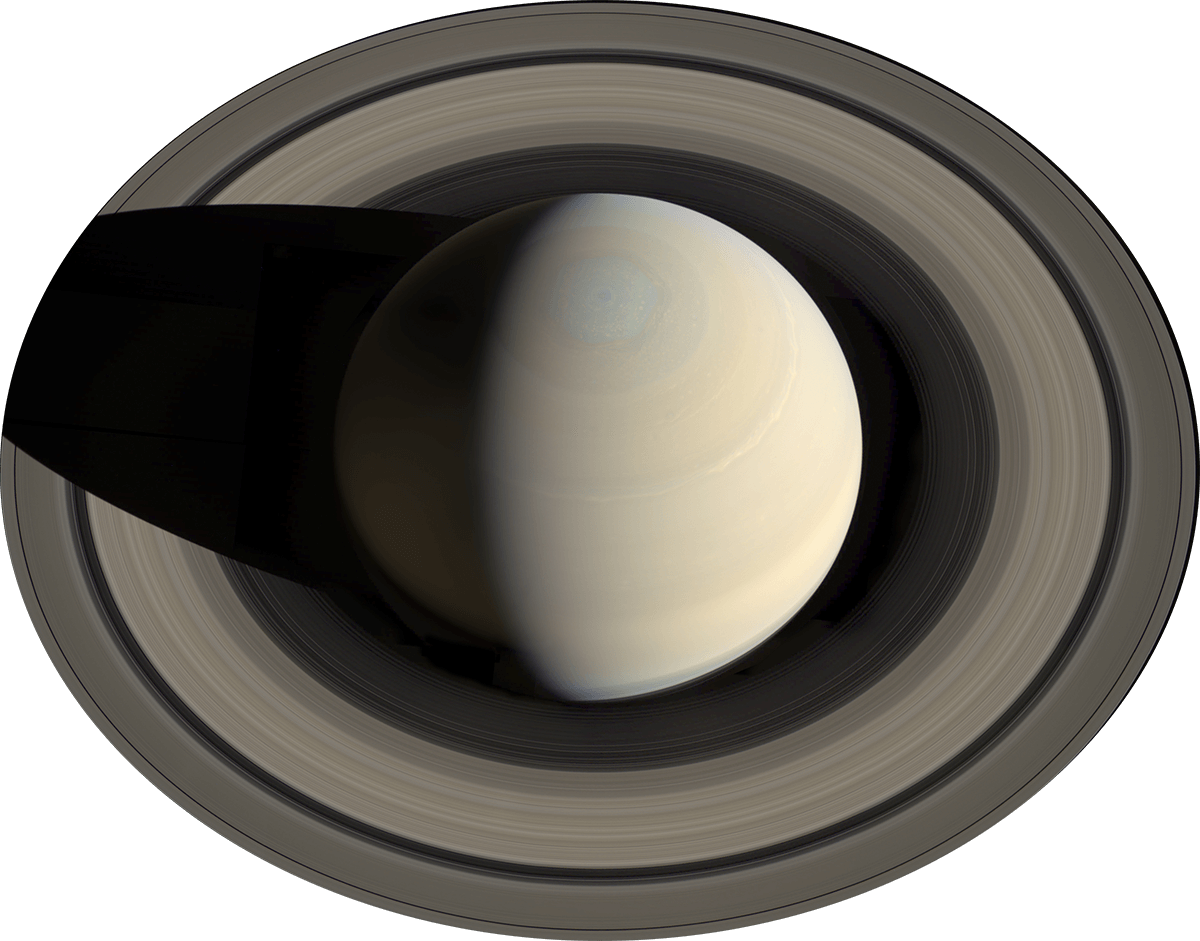 Uranus is the seventh planet in terms of distance from the Sun, the third in diameter and the fourth in mass. It was discovered in 1781 by the English astronomer William Herschel and named after the Greek sky god Uranus. Unlike the gas giants - Saturn and Jupiter, which consist mainly of hydrogen and helium, there is no metallic hydrogen in the bowels of Uranus and Neptune similar to it, but there is a lot of ice, for this reason, experts have identified these two planets in a separate category - ice giants! Uranus is the coldest planetary atmosphere in the solar system, with a minimum temperature of -224°C. The orientation of Uranus in space differs from the rest of the planets of the solar system - its axis of rotation lies, as it were, "on its side" relative to the plane of revolution of this planet around the Sun. The diameter of Uranus is 50,720 km, around the Sun Uranus rotates in 84 years, at a speed of 6.81 km/s. The distance to the Sun is 4496 million km. 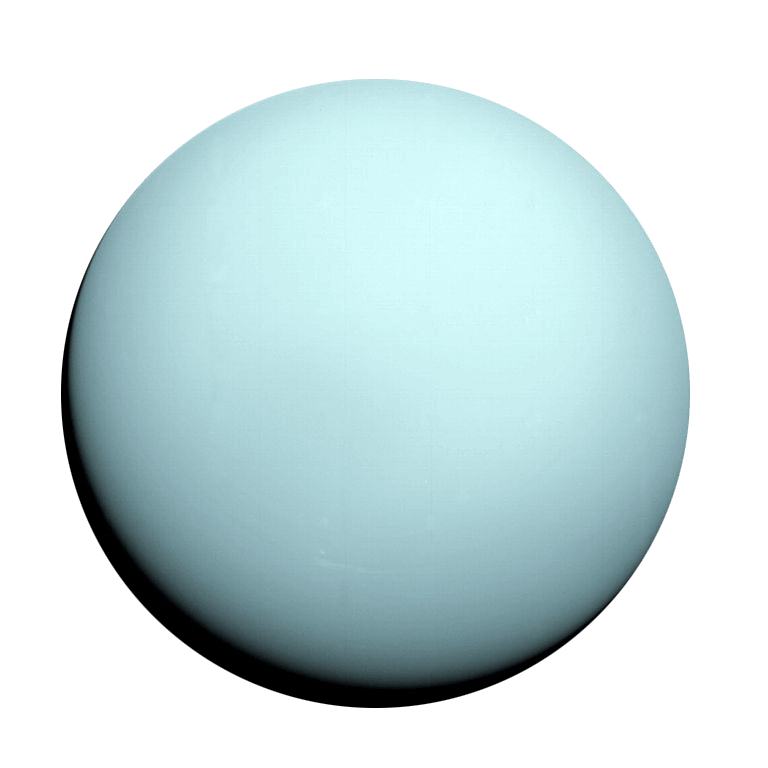 Neptune is the eighth and farthest planet from the Sun in the solar system. Its mass exceeds the mass of the Earth by 17.2 times. The planet is named after Neptune, the Roman god of the seas. Discovered on September 23, 1846, Neptune was the first planet to be discovered through mathematical calculations. Neptune is close in composition to Uranus, the atmosphere of Neptune consists mainly of hydrogen and helium, and the interior is mainly of ice and stone. The strongest winds among the planets of the solar system rage in the atmosphere of Neptune, according to some estimates, their speeds can reach 600 m/s. The temperature of Neptune in the upper atmosphere is close to −220 °C. The diameter of Neptune is 49,500 km, Neptune rotates around the Sun in 165 years, at a speed of 5.43 km/s. The distance to the Sun is 5929 million km. 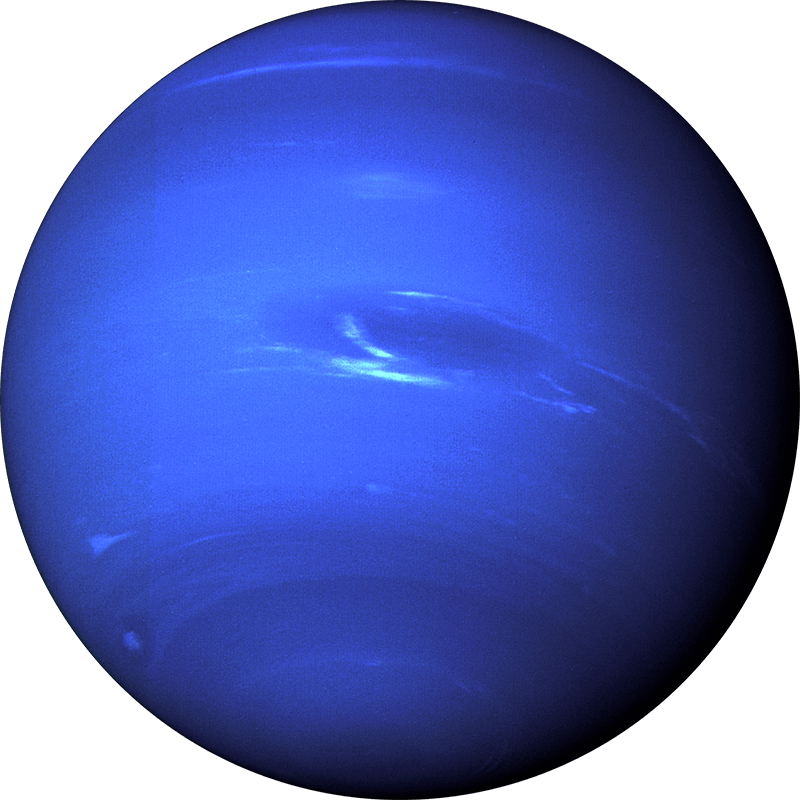 The solar system is part of the structure of the Milky Way galaxy and is located farther from the center than from the borders.

Title
Author
Date
Publisher
Description
On Friday NASA's Lucy probe starts its 12-year mission, to explore strange new asteroids
Katyanna Quach
October 12, 2021
go.theregister.com
Astronomers will be searching for clues on how the Solar System formed
Solar System's fastest-known asteroid spotted, flies closer to the Sun than Mercury
Katyanna Quach
August 24, 2021
go.theregister.com
Boffins ponder where Usain Bolt of space rocks came from
Fastest orbiting asteroid discovered
Science X staff
August 23, 2021
phys.org
Using the powerful 570-megapixel Dark Energy Camera (DECam) in Chile, astronomers just ten days ago discovered an asteroid with the shortest orbital period of any known asteroid in the Solar System. The orbit of the approximately 1-kilometer-diameter asteroid takes it as close as 20 million kilometers (12 million miles or 0.13 au), from the Sun every 113 days. Asteroid 2021 PH27, revealed in images acquired during twilight, also has the smallest mean distance (semi-major axis) of any known asteroid in our Solar System--only Mercury has a shorter period and smaller semi-major axis. The asteroid is so close to the Sun's massive gravitational field, it experiences the largest general relativistic effects of any known Solar System object.
Good news: There's a slightly increased chance of asteroid Bennu hitting Earth. Bad news: It's still really slight
Katyanna Quach
August 12, 2021
go.theregister.com
Don't get your hopes up about that Sept 24, 2182 end-of-world party
I've always wondered: why are the stars, planets and moons round, when comets and asteroids aren't?
Jonti Horner, Professor (Astrophysics), University of Southern Queensland
July 16, 2021
news.google.com
Toowoomba (Australia), Jul 16 (The Conversation) I'm puzzled as to why the planets, stars and moons are all round (when) other large and small objects such...
SHOW MORE