Smart cities are equipped with interconnected networks of sensors, devices, and software for data collection and city operations optimization. 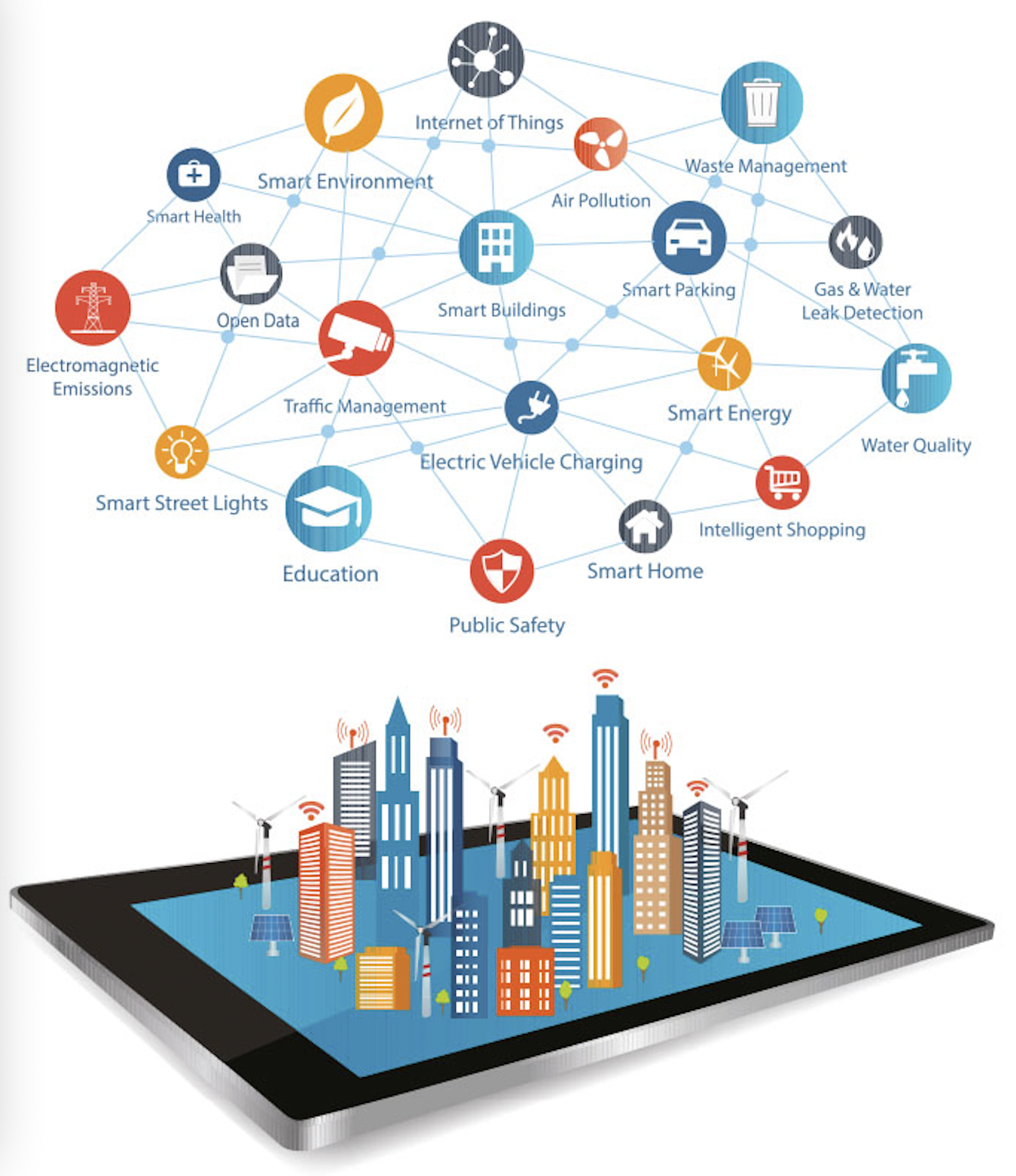 Use cases for smart citiesOverview

A smart city is defined as a city equipped with an interconnected network of sensors, devices, and software that is capable of collecting and analyzing mass amounts of data from various industries including, but not limited to: urban planning, garbage collection, retail, and more. The intent of smart cities is to create more sustainable environments for residing citizens.

Various technologies are responsible for the efficacy of smart cities, including:

Each component of a smart city works with the other systems to contextualize mass amounts of data that can be leveraged to improve the overall functionality of a city’s components and systems.

The ICT framework is made up of six components that work in conjunction with the IoT network. The components are made up of:

The ICT framework is responsible for transmitting data in real-time wirelessly using technology and cloud-based infrastructures. An example of this is traffic patterns being analyzed through sensors on any given roadway.

IoT applications are based within the cloud and are used to receive, analyze, and manage the incoming issues as they are occurring. For example, if traffic flows are moving inadequately because of poorly timed traffic lights, the sensors would detect the traffic flows and patterns and the IoT applications would adjust the timing of traffic lights to enhance traffic flow efficiently in real-time. Actively responding and adjusting to a city’s needs in this manner optimizes safety concerns and provides actionable insights on a day-to-day basis.

GIS is used in smart cities for planning, mapping, and development purposes. The use of GIS results in urban areas being able to manage waste management issues, water management, and excessive energy consumption, which is often an issue in populous urban regions. Los Angeles is an example of where GIS can be used to manage various systems as it experiences grid outages nearly every summer as well as needs to manage water consumption in periods of drought.

Large scale innovation, such as smart cities, requires insurance to protect and safeguard the physical products, companies providing the product, and consumers using the products.

Key factors for smart city insurance are the decrease in risks due to smart technologies, the new risks that could emerge due to smart cities, the increase of urban populations, and the fact smart cities may not be fully realized for decades. It is important to note that while physical risks posed in current cities may decline with smart technology, cyber risks due to increased technological dependence are expected to grow.

Research shows that when city populations double, infrastructure and cost only increases by 85% while crime and human factor incidents increase roughly 115%. This means insurance companies will have to be flexible in coverage and services due to seen and unforeseen risks posing threats to the current models of insurance.

Insurance companies are posed with the following questions while looking at smart cities, namely the effect smart cities may have on decreasing risk for citizens. As far as insurance companies go, less risk could decrease the number of consumers opting for insurance and even pose a risk to the viability of the current insurance model. Key questions include how smart cities will affect smaller regional insurers, vehicle and health risks, and the structure of commercial businesses.

As smart cities emerge and grow, less reliance on individual auto ownership is expected as citizens opt for ride-sharing, autonomous vehicles, and new public transportation options. This is expected to reduce the total number of vehicles on the road and total number of accidents.

Smart cities would create an increase in compact living situations like apartment rentals and purchasing condos. Conversely, this means that there will be fewer homeowners, but a higher cost for the homes that do exist in the city. As a result, the disparity of real estate values will grow and the distribution will change significantly.

A shift to smart cities would create new and change existing businesses, and increase the movement of those commercial entities from small towns or cities to dense urban areas. This is expected to decrease the risk for the business owner’s real estate and vehicle fleets.

Air and water quality has been a problem for 21st-century cities, but pollution in these systems is expected to decrease as smart cities implement more efficient solutions for manufacturing, transportation, and workplace safety. The expectation of increased public mobility in the city and better public safety would also contribute to lowered health risks.

The smart city industry is projected to be a $400 billion market by 2020, with 600 cities around the globe expected to generate 60% of the world's GDP by 2025, according to McKinsey research, as previously published in TechRepublic.
In addition, the National Science Foundation allocated $60 million in new funding for its Smart Cities Initiative.
Across the globe, smart city technology spending reached $80 billion in 2016, and is expected to grow to $135 billion by 2021, according to a report from the International Data Corporation (IDC).

And the White House announced in late 2016 that it would make an investment of $80 million for smart cities, expanding upon an initiative that began in September 2015.

Title
Author
Date
Publisher
Description
The Station: Bird has drama in San Francisco, drone delivery startup Zipline raises $250M
Aria Alamalhodaei
July 5, 2021
TechCrunch
The Station is a weekly newsletter dedicated to all things transportation. Sign up here -- just click The Station -- to receive it every weekend in your inbox. Happy 4th of July! For those of you who are actually checking your emails today while getting some sun at an overcrowded beach or diligently grilling hot dogs, [...]
/C O R R E C T I O N -- Venturous Group/
Venturous Group
June 23, 2021
www.prnewswire.com:443
/PRNewswire/ -- Venturous Group, China's first CitytechTM Group, closed its Series A investment round at the end of Q1, raising US$131 million. Due to strong...
IDC Opens Public Voting for the 2021 Finalists of the Smart City Asia Pacific Awards (SCAPA)
February 25, 2021
WebWire
The priorities of Smart Cities in the Asia/Pacific region have been radically accelerated in the past months, as cities grapple with dire self-sufficiency implications of tackling a global pandemic. These priorities are closely intertwined to achieving systemic Smart City ecosystem outcomes, something that IDC has been able to track through its Smarty City Asia/Pacific Awards (SCAPA) program for the past six years already. IDC Government Insights received over 260 smart city initiatives fr...
Eurazeo announces second Smart City fund with €80 million initial close - Tech.eu
Annie Musgrove
February 11, 2021
Tech.eu
French-born venture capital firm Eurazeo has announced the first close of its second smart city fund, devoting €80 million to invest in the most promising energy, mobility proptech and logistics startups worldwide. Specifically the fund will look at startups assisting shifts such as work from home, shared mobility, electric mobility, food delivery and the renewable [...]
MediaTek Named "IoT Semiconductor Company of the Year" in 2019 IoT Breakthrough Awards Program
January 7, 2019
WebWire
MediaTek today announced that it has been selected as the winner of the "IoT Semiconductor of the Year" award from IoT Breakthrough, an independent organization that recognizes the top companies, technologies and products in the global Internet-of-Things (IoT) market today. For nearly two decades, MediaTek's market-leading IoT chipsets have powered connected products such as mobile devices, smart home products, wearables, location services and more. MediaTek has also played a pivotal role...