Sirmione (Brescian: Sirmiù; Venetian: Sirmion) is a comune in the province of Brescia, in Lombardy (northern Italy). It is bounded by the communes of Desenzano del Garda (Lombardy) and Peschiera del Garda in the province of Verona and the region of Veneto. It has a historical centre which is located on the Sirmio peninsula that divides the lower part of Lake Garda.

The first traces of human presence in the area of Sirmione dates from the 6th–5th millennia BC. Settlements on palafitte existed in the 3rd and 2nd millennia BC.

Starting from the 1st century BC, the area of the Garda, including what is now Sirmione, became a favourite resort for rich families coming from Verona, then the main Roman city in north-eastern Italy. The poet Catullus praised the beauties of the city and spoke of a villa he had in the area.

In the late Roman era (4th–5th centuries AD) the city became a fortified strongpoint defending the southern shore of the lake. A settlement existed also after the Lombard conquest of northern Italy: in the late years of the Lombard kingdom, the city was capital of a judiciary district directly subordinated to the king. Ansa, wife of King Desiderius, founded a monastery and a church in the city.

Around the year 1000 Sirmione was probably a free comune, but fell in the hands of the Scaliger in the early 13th century. Mastino I della Scala was probably the founder of the castle. In the same period Sirmione was refuge for Patarines hereticals. The military role of the city continued until the 16th century, but a garrison remained in the castle until the 19th century.

Sirmione was a possession of the Venetian Republic from 1405 until 1797, when it was acquired by the Habsburg Empire. It became part of the Kingdom of Italy in 1860.

The main historical landmark of Sirmione is the so-called Grottoes of Catullus (Grotte di Catullo), the most striking example of a Roman private edifice discovered in northern Italy. The edifice had a rectangular plan and measured 167 m × 105 m.

The town is famous for its thermal springs. Other sights include:

The Scaligero Castle (13th century). This is a rare example of medieval port fortification, which was used by the Scaliger fleet. The building of this complex started in 1277 by Mastino della Scala. It presents the typical Ghibelline swallowtail merlons and the curtain-walls (with three corner towers) in pebbles alternating with two horizontal bands of brick courses. The walls on the inside were finished with plaster with graffiti, simulating blocks of stone. The castle stands at a strategic place at the entrance to the peninsula. It is surrounded by a moat and it can only be entered by two drawbridges. The castle was established mainly as a protection against enemies, but also against the locals. The main room houses a small museum with local finds from the Roman era and a few medieval artifacts.

The small church Sant’Anna della Rocca, next to the castle. It dates from the 12th century and was used mainly by the garrison and the few local villagers. The frescoes in the church date from the 14th–17th century.

The church of San Pietro in Mavino, built in Lombard times (A.D. 765) but renovated in the early 14th century. At the portal one can see a brick wall with the date 1320. It is secluded from the town and is situated on the hill. The term "mavino" refers to the Latin phrase "in summas vineas" (up in the vineyards). The church has a rectangular plan and is oriented east-west. The chancel contains three apses. The one in the middle shows a Christ Pantocrator in Byzantine tradition; the one on the left a Madonna Enthroned; the one on the right a Crucifixion. The ceiling is made of wooden beams. The church contains frescoes from the 12th–16th centuries. The Romanesque bell tower dates from 1070. The church has been used in the past as a military hospital and its surroundings as a cemetery for plague victims.

The church Santa Maria Maggiore (late 15th century) is located in the town centre. It stands on the site of the former Lombard church of San Martino (second half of the 8th century). It has a rectangular shape with a polygonal apse and is oriented east-west. It has a single nave, divided by three arches. It is decorated with early 15th-century frescoes. The frescoes at the bottom of the north wall even belong to an earlier period. The contemporary wooden statue of the Madonna Enthroned is also of special interest. 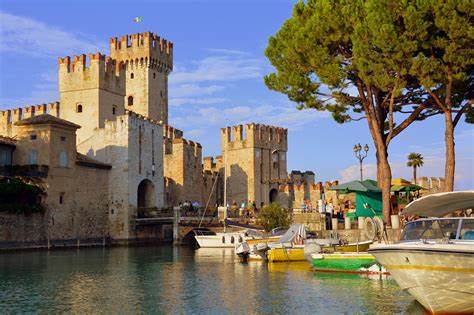