A company offering a business intelligence and risk management platform.

Sayari (also known as Sayari Analytics and Sayari Labs) is a Washington, D.C.-based company which develops and sells access to its data platform, as well as providing consulting services, aimed at helping corporations, financial institutions, and governments assess and manage risk. The company is venture-funded and has been backed by investors such as Lavrock Ventures, Task Force X Capital, and In-Q-Tel.

Sayari was founded in 2015 by Benjamin Power and Farley Mesko, who serve as COO and CEO, respectively. The two business partners previously worked together at C4ADS, a nonprofit which provides data-driven analysis and reporting on global conflicts and emerging security issues.

Sayari ingests bulk data from around the open Web, as well as through data feeds provided by governments and other sources. The company states that the data it collects – while publicly available – is not typically surface-able via mainstream search engines like Google, Bing, or DuckDuckGo. Sayari says it specializes in collecting information about "hard-to-see" countries such as China, Iran, Venezuela, Russia, Mexico, and regions like sub-Saharan Africa.

Sayari says its knowledge graph is "the first purpose-built tool for navigating the complexity of global corporate ownership and commercial relationships". The data platform process and displays corporate relationship information like customers, vendors, and third parties. 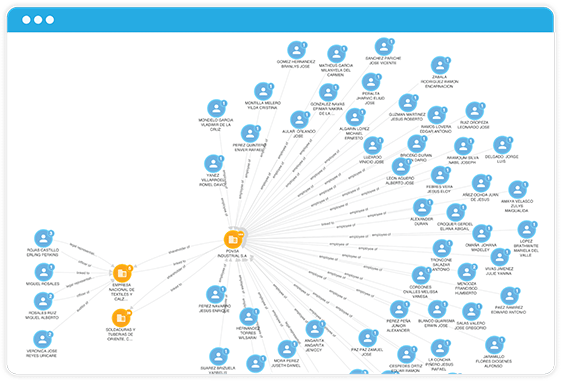 Sayari's normalized public records data can be used to trace ultimate beneficial ownership (UBO), even if financial assets are held in offshore entities in jurisdictions where the disclosure of corporate ownership is not required. 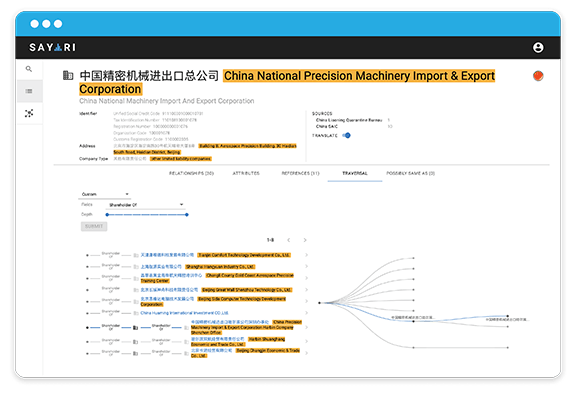 Each relationship in Sayari's data model is linked back to the primary source documents. Graph data can be explored through a web-based graphical user interface, via REST API, data subscription, or an on-premise deployment for customers with higher security needs.

Markets and use cases

Sayari sells its data platform to multinational corporations, financial institutions, advisory service providers, and governments. The company outlines specific use cases for its product in each of these target markets, which generally fall into the following categories:

Sayari positions itself as a "third-party risk management" solution to multinational corporations. It also markets itself as an auditing and discovery tool for export controls and trade compliance, stating that "[the company] uses graph analytics to pre-compute ownership structures and flag any hits on a screening list, accelerating complex investigations and enabling compliance with 'narrative sanctions' and the 'OFAC 50% rule.'"

To prospective customers within financial institutions, Sayari positions itself as a "purpose-built solution for navigating global customer [and] counterparty risk." Sayari says it offers "sanctions compliance," client monitoring and "enhanced" due diligence capabilities, and information which could be used in investigations and anti-money laundering efforts.

Sayari says its platform can be used by advisory teams to "support their clients through disputes, litigation, and key business decisions."The company markets its knowledge graph as a tool for due diligence and business intelligence, as well as for tracing cross-border financial flows, which could assist in identifying and recovering assets such as real estate, goods, company stock, and other assets.

Sayari positions itself to prospective government customers in a similar way to target customers in the financial and advisory markets, as the "first purpose-built solution for navigating the complexity of global commercial & financial networks."For the defense and intelligence community, Sayari states that its platform "enables data-driven solutions for counter-threat finance mission sets." and that it can offer evidence of "illicit finance, proliferation, trafficking, and more is hiding in plain sight, as well as sensitive foreign national security information."To prospective law enforcement clients, the company states its product can be used to expose shell companies and layered ownership structures "with a single click," and can aid in discovering "previously unknown entities owned, controlled, or acting for or on behalf of known criminals, designated terrorists, traffickers, and human rights violators."

Treasury's War on Terror: What It Means for Banking and Global Commerce