Scientists from the University of Kyoto have developed a mathematical and robotic model of a centipede that has clarified the features of the locomotion of these animals. The results of the study are published in Scientific Report.

 Millipedes are a superclass of terrestrial arthropods with a body length of 2 to 32 millimeters and up to 750 legs. Theoretically, this number of limbs should create propulsive and decelerating forces that reduce their maneuverability. Despite this, individual representatives of the subtype, in particular Scutigera coleoptrata (Common flycatcher), are capable of speeds up to 40 centimeters per second. At the same time, centipedes deftly overcome obstacles. 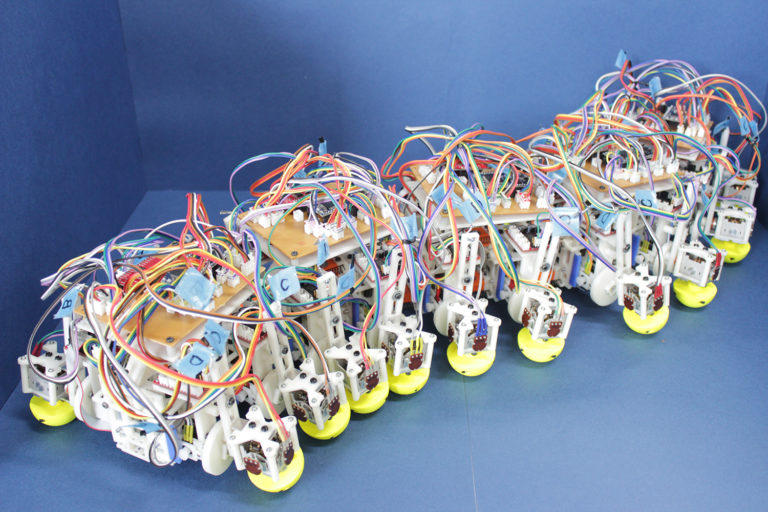 To resolve the contradiction, the researchers created a computer and then a robotic model of a centipede with a total length of 1.35 meters. The device consisted of six segments, united by five joints of the vertical axis and torsion springs. Each segment was equipped with a pair of bi-articulated legs for movement, the legs on the head unit had an additional articulation for body orientation using a laser scanner with a rangefinder. The connection of the segments was passive, but the leg joints were driven by motors.

The step of the robot consisted of two actions: describing a semicircle with the foot and moving the “foot”. In the original version, the front guide "foot" moved in a plane parallel to the body, the torsional stiffness of the springs was 450 Newton-millimeters per degree. With this configuration, all segments moved only in a straight line. The torsional stiffness of the springs in the front legs was then lowered to 7.3 Newton-millimeters per degree. As a result, scientists managed to achieve an authentic curvature of the centipede's body.

The authors clarified that such locomotion allowed the articulated robot to maintain dynamic balance. Its wave-like motion was based on the Andropov-Hopf supercritical bifurcation, in this case it manifested itself in the fact that the body achieved periodic stability due to peak values ​​of imbalance in a static position. The key condition for the dynamic balance of the robot was the high speed of movement.

"This study provides the key to understanding animal movement and making sense of it within the biological sciences," said co-author Shinya Aoi.

According to him, in the future, such experiments will improve the motor skills of robots, regardless of the number of their limbs.

The very concept of robotic locomotion is a collective name for the various methods that robots use to get from place to place.

Wheeled robots are generally quite energy efficient and easy to operate. However, other forms of locomotion may be more appropriate for a number of reasons, such as crossing uneven terrain, and moving and interacting in the human environment. In addition, the study of bipedal and insectoid robots may have beneficial effects on biomechanics.

The main goal in this area is to develop capabilities for robots that will independently decide how, when and where to move. However, coordinating a large number of robotic joints, even for simple matters such as stairway negotiations, is difficult. Autonomous robotic locomotion is a major technological hurdle for many areas of robotics such as humanoids (such as the Honda Asimo).

Common types of locomotion: walking, running, jumping, metachronic movement (a coordinated sequential mechanical action that has the appearance of a traveling wave is called a metachronal rhythm or wave and is used in nature with the help of ciliates for transport, as well as worms and arthropods for locomotion), swimming, sliding (several snake robots have been successfully developed. By mimicking the movement of real snakes, these robots can navigate very tight spaces, which means that one day they could be used to search for people trapped in collapsed buildings. The Japanese ACM-R5 snake robot can even move both on land and in water), brachiation allows robots to travel by swinging, using energy only to grab and release surfaces. This movement is like a monkey swinging from tree to tree. The two types of braching can be compared to bipedal walking (continuous contact) or running (rich). Continuous contact is that the hand/grip mechanism is always attached to the surface being crossed; richochetal uses a "flight" phase from one surface/limb to the next.