All edits by  Speedy Rider

Speedy Rider edited on 22 Mar, 2022
Edits made to:
Infobox (+1 properties)
Infobox
Genre
‌
film based on a novel

Speedy Rider edited on 22 Mar, 2022
Edits made to:
Infobox (+1 properties)
Infobox
Music by 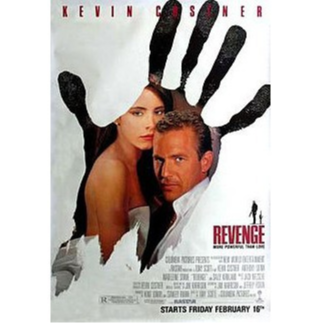 Revenge is a 1990 romantic thriller film directed by Tony Scott and starring Kevin Costner, Anthony Quinn, Madeleine Stowe, Miguel Ferrer and Sally Kirkland. Some scenes were filmed in Mexico. The film is a production of New World Pictures and Rastar Films and was released by Columbia Pictures. Revenge also features one of John Leguizamo's earliest film roles. The film is based on a novella written by Jim Harrison, published in Esquire magazine in 1979. Harrison co-wrote the script for the film.