The plum pudding model is one of several historical scientific models of the atom. First proposed by J. J. Thomson in 1904 soon after the discovery of the electron, but before the discovery of the atomic nucleus, the model tried to explain two properties of atoms then known: that electrons are negatively charged particles and that atoms have no net electric charge. The plum pudding model has electrons surrounded by a volume of positive charge, like negatively charged "plums" embedded in a positively charged "pudding". 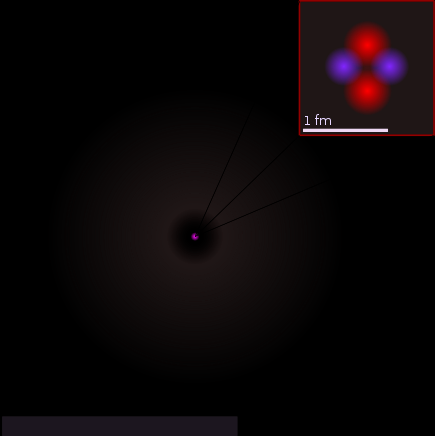 It had been known for many years that atoms contain negatively charged subatomic particles. Thomson called them "corpuscles" (particles), but they were more commonly called "electrons", the name which G. J. Stoney had coined for the "fundamental unit quantity of electricity" in 1891. It had also been known for many years that atoms have no net electric charge. Thomson held that atoms must also contain some positive charge that cancels out the negative charge of its electrons.Thomson published his proposed model in the March 1904 edition of the Philosophical Magazine, the leading British science journal of the day. In Thomson's view:

... the atoms of the elements consist of a number of negatively electrified corpuscles enclosed in a sphere of uniform positive electrification, ...

J.J. Thomson had followed the work of Thomson Lord Kelvin who had written a paper proposing a vortex atom in 1867.

J.J. Thomson abandoned his 1890 "nebular atom" hypothesis, which was based on the vortex theory of the atom, in which atoms were composed of immaterial vortices and suggested that there were similarities between the arrangement of vortices and periodic regularity found among the chemical elements.

Being an astute and practical scientist, Thomson based his atomic model on known experimental evidence of the day, and in fact, followed Lord Kelvin's lead again as Kelvin had proposed a positive sphere atom a year earlier.J.J. Thomson's proposal based on Kelvin's model of a positive volume charge reflects the nature of his scientific approach to discovery which was to propose ideas to guide future experiments.

In this model, the orbits of the electrons were stable under classical mechanics because when an electron moved away from the centre of the positively charged sphere, it was subjected to a greater net positive inward force, because there was more positive charge inside its orbit (see Gauss's law). Electrons were free to rotate in rings which were further stabilized by interactions among the electrons, and spectroscopic measurements were meant to account for energy differences associated with different electron rings. Thomson attempted unsuccessfully to reshape his model to account for some of the major spectral lines experimentally known for several elements.[10] As early as 1897, theoretical physicist, Joseph Larmor had explained the splitting of the spectral lines in a magnetic field by the oscillation of electrons.[11][12] According to a centennial celebration of the Bohr atom in Nature magazine, it was John William Nicholson in 1912 who first discovered that electrons radiate the spectral lines as they descend towards the nucleus and his theory was both nuclear and quantum.

The plum pudding model usefully guided his student, Ernest Rutherford, to devise experiments to further explore the composition of atoms. Also, Thomson's model was an improvement upon previous solar system models of Joseph Larmor and the Saturnian ring model for atomic electrons put forward in 1904 by Nagaoka (after James Clerk Maxwell's model of Saturn's rings) as these could not withstand classical mechanics as in the solar system models the electrons would spiral into the nucleus, so they were dropped in favor of Thompson's model. However, all previous atomic models were useful as predecessors of the more correct 1913 solar-system-like Bohr model of the atom which Bohr references in his paper that he borrowed substantially from the 1912 nuclear model of John William Nicholson whose quantum atomic model quantized angular momentum as h/2π The Bohr Model was initially planar as the Nagaoka model, but Sommerfeld introduced elliptical orbits in the years 1914-1925 until the theory was overthrown by modern quantum mechanics.

The colloquial nickname "plum pudding" was soon attributed to Thomson's model as the distribution of electrons within its positively charged region of space reminded many scientists of raisins, then called "plums", in the common English dessert, plum pudding.

In 1909, Hans Geiger and Ernest Marsden conducted experiments with thin sheets of gold. Their professor, Ernest Rutherford, expected to find results consistent with Thomson's atomic model. It was not until 1911 that Rutherford correctly interpreted the experiment's results[18][19] which implied the presence of a very small nucleus of positive charge at the center of each gold atom. This led to the development of the Rutherford model of the atom. Immediately after Rutherford published his results, Antonius Van den Broek made the intuitive proposal that the atomic number of an atom is the total number of units of charge present in its nucleus. Henry Moseley's 1913 experiments (see Moseley's law) provided the necessary evidence to support Van den Broek's proposal. The effective nuclear charge was found to be consistent with the atomic number (Moseley found only one unit of charge difference). This work culminated in the solar-system-like (but quantum-limited) Bohr model of the atom in the same year, in which a nucleus containing an atomic number of positive charges is surrounded by an equal number of electrons in orbital shells. As Thomson's model guided Rutherford's experiments, Bohr's model guided Moseley's research.

The plum pudding model with a single electron was used in part by the physicist Arthur Erich Haas in 1910 to estimate the numerical value of Planck's constant and the Bohr radius of hydrogen atoms. Haas' work estimated these values to within an order of magnitude and preceded the work of Niels Bohr by three years. Of note, the Bohr model itself provides reasonable predictions only for atomic and ionic systems with just one effective electron.

The classical electrostatic treatment of electrons confined to spherical quantum dots is also similar to their treatment in the plum pudding model. In this classical problem, the quantum dot is modeled as a simple dielectric sphere (in place of a uniform, positively charged sphere as in the plum pudding model) in which free, or excess, electrons reside. The electrostatic N-electron configurations are found to be exceptionally close to solutions found in the Thomson problem with electrons residing at the same radius within the dielectric sphere. Notably, the plotted distribution of geometry-dependent energetics has been shown to bear a remarkable resemblance to the distribution of anticipated electron orbitals in natural atoms as arranged on the periodic table of elements.

Of great interest, solutions of the Thomson problem exhibit this corresponding energy distribution by comparing the energy of each N-electron solution with the energy of its neighbouring (N-1)-electron solution with one charge at the origin. However, when treated within a dielectric sphere model, the features of the distribution are much more pronounced and provide greater fidelity[clarification needed] with respect to electron orbital arrangements in real atoms.