The peony or paeony is a flowering plant in the genus Paeonia, the only genus in the family Paeoniaceae. Peonies are native to Asia, Europe and Western North America. Scientists differ on the number of species that can be distinguished, although the current consensus is 33 known species. The relationships between the species need to be further clarified.

Most are herbaceous perennial plants 0.25–1 metre (1–3 ft) tall, but some are woody shrubs 0.25–3.5 metres (1–11 ft) tall. They have compound, deeply lobed leaves and large, often fragrant flowers, in colors ranging from purple and pink to red, white or yellow, in late spring and early summer. The flowers have a short blooming season, usually only 7–10 days.

Peonies are popular garden plants in temperate regions. Herbaceous peonies are also sold as cut flowers on a large scale, although generally only available in late spring and early summer

The peony or paeony is a flowering plant in the genus Paeonia, the only genus in the family Paeoniaceae. Peonies are native to Asia, Europe and Western North America. Scientists differ on the number of species that can be distinguished, ranging from 25 to 40, although the current consensus is 33 known species. The relationships between the species need to be further clarified

Peonies are popular garden plants in temperate regions. Herbaceous peonies are also sold as cut flowers on a large scale, although generally only available in late spring and early summer

The species of the section Paeonia have a disjunct distribution, with most of the species occurring in the Mediterranean, while many others occur in eastern Asia. Genetic analysis has shown that all Mediterranean species are either diploid or tetraploid hybrids that resulted from the crossbreeding of species currently limited to eastern Asia. The large distance between the ranges of the parent species and the nothospecies suggest that hybridisation already occurred relatively long ago. It is likely that the parent species occurred in the same region when the hybrids arose, and were later exterminated by successive Pleistocene glaciations, while the nothospecies remained in refugia to the South of Europe. During their retreat P. lactiflora and P. mairei likely became sympatric and so produced the Himalayan nothospecies P. emodi and P. sterniana. 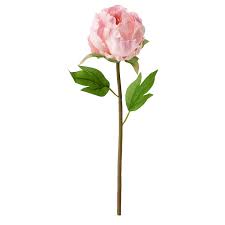 The family name "Paeoniaceae" was first used by Friedrich K.L. Rudolphi in 1830, following a suggestion by Friedrich Gottlieb Bartling that same year. The family had been given other names a few years earlier. The composition of the family has varied, but it has always consisted of Paeonia and one or more genera that are now placed in Ranunculales. It has been widely believed that Paeonia is closest to Glaucidium, and this idea has been followed in some recent works.Molecular phylogenetic studies, however, have demonstrated conclusively that Glaucidium belongs in the family Ranunculaceae, order Ranunculales, but that Paeonia belongs in the unrelated order Saxifragales. The genus Paeonia consists of about 35 species, assigned to three sections: Moutan, Onaepia and Paeoniae. The section Onaepia only includes P. brownii and P. californicum. The section Moutan is divided into P. delavayi and P. ludlowii, together making up the subsection Delavayanae, and P. catayana, P. decomposita, P. jishanensis, P. osti, P. qiui and P. rockii which constitute the subsection Vaginatae. P. suffruticosa is a cultivated hybrid swarm, not a naturally occurring species.

The remainder of the species belongs to the section Paeonia, which is characterised by a complicated reticulate evolution. Only about half of the (sub)species is diploid, the other half tetraploid, while some species both have diploid and tetraploid populations. In addition to the tetraploids, are some diploid species also likely the result of hybridisation, or nothospecies. Known diploid taxa in the Paeonia-section are P. anomala, P. lactiflora, P. veitchii, P. tenuifolia, P. emodi, P. broteri, P. cambedessedesii, P. clusii, P. rhodia, P. daurica subsps. coriifolia, daurica, macrophylla and mlokosewitschii. Tetraploid taxa are P. arietina, P. officinalis, P. parnassica, P. banatica, P. russi, P. peregrina, P. coriacea, P. mascula subsps. hellenica and mascula, and P. daurica subsps. tomentosa and wittmanniana. Species that have both diploid and tetraploid populations include P. clusii, P. mairei and P. obovata. P. anomala was proven to be a hybrid of P. lactiflora and P. veitchii, although being a diploid with 10 chromosomes. P. emodi and P. sterniana are diploid hybrids of P. lactiflora and P. veitchii too, and radically different in appearance. P. russi is the tetraploid hybrid of diploid P. lactiflora and P. mairei, while P. cambedessedesii is the diploid hybrid of P. lactiflora, likely P. mairei, but possibly also P. obovata. P. peregrina is the tetraploid hybrid of P. anomala and either P. arietina, P. humilis, P. officinalis, P. parnassica or less likely P. tenuifolia, or one of their (now extinct) common ancestors. P. banatica is the tetraploid hybrid of P. mairei and one of this same group. P. broteri, P. coriacea, P. clusii, P. rhodia, P. daurica subsp. mlokosewitschi, P. mascula subsp. hellenica and ssp. mascula, and P. daurica subsp. wittmanniana are all descendants of hybrids of P. lactiflora and P. obovata

Species of the family grow in the subtropics and temperate regions of Eurasia and North America.

Peonies prefer well-lit and sun-warmed areas, although they can tolerate some shading in the middle of the day.

The best time for planting peonies is August-September.

Peonies are propagated by dividing the bushes, but if you need to get a lot of plants of the variety you like, then you can propagate by layering, stem and root cuttings. The most reliable way is reproduction by buds with pieces of rhizome. Each part of the rhizome should have at least 2-3 buds.