Pelmeni are dumplings of Russian cuisine that consist of a filling wrapped in thin, unleavened dough.

The debate about the exact place of origin is still active, with Ural and Siberia both maintaining strong claims.Pelmeni have been described as "the heart of Russian cuisine."

The dough is made from flour and water, sometimes adding a small portion of eggs. 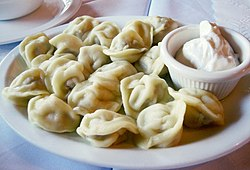 The filling can be minced meat (pork, lamb, beef, fish or any other kind of meat, venison being particularly traditional for colder regions) or mushrooms. The mixing together of different kinds of meat is also popular. The traditional Udmurt recipe requires a mixture of 45% beef, 35% mutton, and 20% pork. Various spices, such as black pepper and diced onions as well as garlic, are mixed into the filling. They are commonly topped with sour cream, mayonnaise, dill, red onions or vinegar, all of which are traditional to the region and can be produced in the Siberian climate.

Adding small amounts of cabbage, tomato and horseradish as well right into the mince is common for certain regions.

Temperature and humidity have considerable impact on dough consistency and stability.

The first mention of a dish similar to dumplings comes from ancient Greece, but the Ural region seems to be the origin place of the pelmeni. The word pelmeni is derived from pel'n'an' (пельнянь)—literally "ear bread" in the Finnic Komi and Udmurt languages. It is unclear when pelmeni entered the cuisines of the indigenous Siberian people and when they first appeared in Russian cuisine. One theory suggests pelmeni, or stuffed boiled dumplings in general, originated in Siberia, possibly a simplified adaptation of the Chinese jiaozi (in some dialects it is called Bāomiàn "包麵/包面"). Another theory suggests that pelmeni were carried by the Mongols to Siberia and the Urals, from where they gradually spread as far as Eastern Europe. Pelmeni became especially popular among Russian hunters.

Pelmeni are a particularly good means of quickly preserving meat during the long Siberian winter, especially eliminating the need to feed livestock during the long winter months. Thus, despite their Uralic origin, pelmeni were much influenced by the Siberian way of cooking.

How to make Russian pelmeni - Cooking with Boris