A torqueless helicopter originally developed by the Faculty of Aerospace Engineering at Delft University of Technology The Netherlands. This helicopter can be run as a single-rotor, tailess configuration i.e. not needing a tail rotor which can deliver particular advantages (no tail-rotor weight and failure risk) and disadvantages (flight envelope). 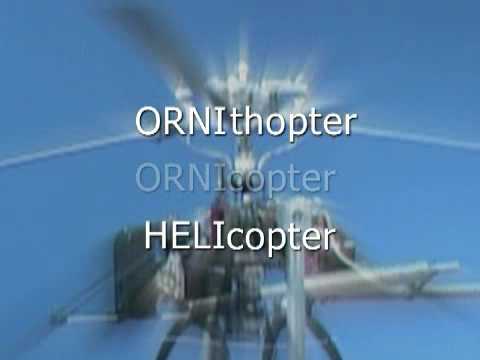 The tail rotor found on conventional helicopters has always been considered a 'necessary evil'. Without it the helicopter is uncontrollable in yaw, yet the tail rotor is an expensive feature, consuming a lot of power, and it provides only marginal control authority under unfavorable wind conditions. Tail rotors are also noisy, vulnerable and dangerous to bystanders. The ideal solution to all these problems would be to design a main rotor that eliminates the need for a tail rotor. Professor van Holten started developing in 2002 a new design for a rotary wing. The Ornicopter is a single rotor helicopter without a reaction torque — it is fully controlled using only one rotor.

The secret to the Ornicopter concept is in rotor blade flapping. The rotor blades are forced to flap up and down once per revolution, thus generating a propulsive force on the blades that drives the rotor around the hub. By increasing or decreasing the amplitude of this flapping movement, the yaw motion of the fuselage can be controlled.

Development of the Ornicopter is an active area of research at the Delft University of Technology.

Designing the Ornicopter, a tailless helicopter with active flapping blades: a case study

Development of a Radio-Controlled Ornicopter: a single rotor helicopter without reaction torque