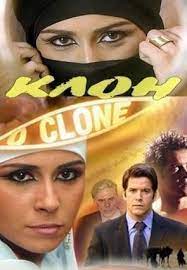 O Clone (English: The Clon2] is a Brazilian Drama telenovela created by Glória Perez and directed by Jayme Monjardim. Produced and aired by Rede Globo, it was aired from 1 October 2001 to 15 June 2002, with 221 episodes. It also was an international success, selling in more than 90 countries.[3]

In the early 1980s, Rio de Janeiro, Brazil; Jade (Giovanna Antonelli), a young Muslim girl, is orphaned when her mother dies and has to go to Morocco where her uncle Alí lives. The problem is that Jade was living in a country with a culture very different from that of an Islamic country. Thus, once she arrives in Morocco, she must learn all concomitant new traditions and customs, adjust to her new way of living, and face all the punishments she will be exposed to because of her conflicting personality and actions that go against her religion.

Back in Rio, a well-off family, the Ferraz, go to vacation in Morocco. Twin brothers Lucas and Diogo Ferraz (Murilo Benício), along with Leônidas (Reginaldo Faria), their father, and doctor Augusto Albieri (Juca de Oliveira), friend of the family and the twins Godfather who is a genetic scientist, visit Alí, a friend of Albieri's. There, Lucas and Jade meet for the first time, and they fall in love at first sight. Jade, knowing it's haraam (a sin) to love Lucas, decides to forgo her religious mandates for the sake of love, which prohibit her from marrying a non-Muslim person. Meanwhile, in Rio, Diogo tragically dies in a helicopter crash. Both Lucas and Leônidas are devastated by the news and Lucas' plans of running away with Jade are subsequently ruined. Albieri, his godparent, is shattered and becomes deeply despondent. He never recovered fully from the death of his fiancée, and Diogo's death reinvigorates his distress.

In an effort to change the natural course of events, Albieri in his despair resolves to utilize Lucas' cell in order to make the first human clone. Deusa (Adriana Lessa), a low-middle class woman who has not been able to get pregnant, is subsequently inseminated with Lucas' cell, and as a result gives birth to a baby, not knowing that it is a clone. Léo is born without complications, but Albieri wants to stay close to Léo and watch him grow up. Léo gradually becomes attached to Albieri, thus making Deusa uneasy.

Several years have passed since Léo was born. Now, Jade is married to Saíd (Dalton Vigh) and she's a mother of a little child, Khadija (Carla Diaz). She lives happily with her new family and is even starting to love Saíd. However, due to Said's insecurities a new encounter with Lucas is forced upon her to test Jade's love for him, with this encounter the old passion revives, but they're not the young lovers they once were and now they have new lives and new responsibilities. Lucas, who also is married, to Maysa (Daniela Escobar) and with a daughter, Mel (Débora Falabella) doesn't know he had been cloned 20 years before. Albieri had kept this a secret from everybody's knowledge and is trying to make it so that Léo and Lucas never meet and thus find out the truth. The last thing Albieri knew from Léo is that he and Deusa went to the north of Brazil, but with the return of both, Léo has become a young, handsome man, and the living image of the young Lucas whom Jade met in Morocco. The appearance of Leo in Brazil and his later travels to Morocco will change the life of all the characters forever.