Newfoundland is a breed of dog originally used as a working dog in Canada. These are large dogs with long thick black, brown or black-and-white fur and a thick undercoat, the presence of white spots on the chest and paws is allowed. Newfoundland has webbing between the fingers.

Newfoundland in Russia is sometimes called a diver. 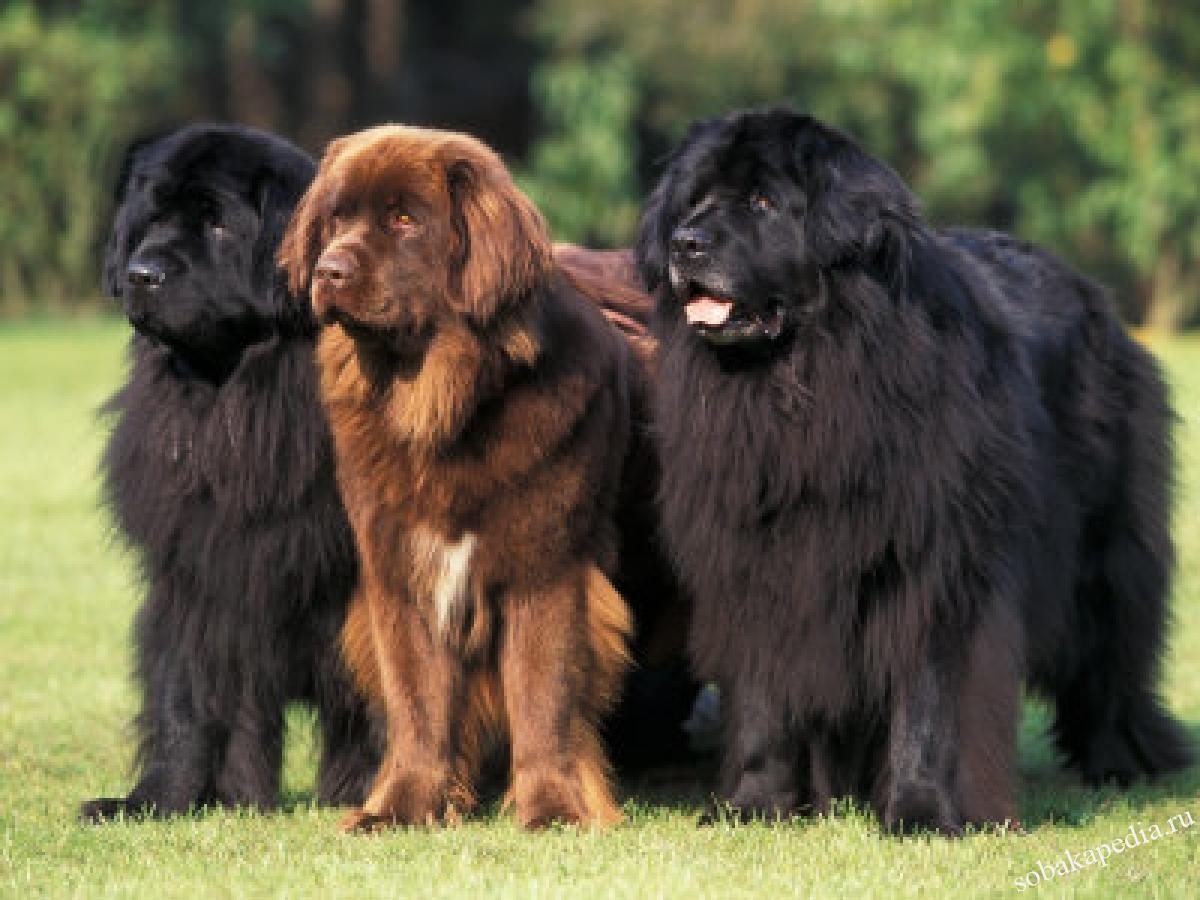 Origin of the breed

The island of Newfoundland is considered the birthplace of the dog.

There is still no consensus among experts about the origin of the breed. The Canadian Guide to Dogs puts forward three main versions of the origin:

The American Kennel Club, as one of the versions, elevates Newfoundlands to large Pyrenean dogs, allegedly brought to Newfoundland by Basque fishermen.

A massive dog with a powerful, muscular body, with well-coordinated movements. The length of the body from the shoulder to the sciatic mound exceeds the height at the withers. The case is compact. The female's body may be slightly more stretched and less massive than that of a male. The distance from the withers to the lower point of the chest is slightly greater than the distance from the lower point of the chest to the ground.

The head is massive. The bitch's head repeats the main proportions of the male's head, but is less massive. The skull is broad, with a slightly convex arch and a strongly developed occipital protuberance. Stop — noticeable, but by no means sharp. The nose is large, well pigmented; the nostrils are well developed. The color is black in black-and-white and black dogs, brown in brown dogs. The muzzle is distinctly square, deep and relatively short, covered with short, soft fur; the skin on the muzzle does not form folds; the corners of the mouth are pronounced distinctly, but not excessively. The cheeks are soft. The bite is scissor-shaped or straight. The eyes are relatively small, deep-set, widely spaced, the eyelids should not droop, exposing the red conjunctiva. The eye color is dark brown in black and black-and-white dogs, a lighter shade is acceptable in brown. The ears are relatively small, triangular in shape, with rounded ends. They are well set on the sides at the back of the skull and fit snugly to the cheekbones. If the ear of an adult dog is pulled forward, its end reaches the inner corner of the eye, located on the same side of the head. The neck is strong, muscular, well-set on the shoulders, long enough to ensure a noble fit of the head. There should be no excessive suspension on the neck.

The backbone is massive everywhere. When viewed from the side, the body is deep and strong. The topline is straight and strong from the withers to the croup. The back is wide. The loin is strong and very muscular. The croup is wide, having an angle of inclination of about 30 °. The chest is wide, voluminous and deep with well-curved ribs. The lower line of the chest and abdomen is almost straight and never tightened. The forelimbs are straight and parallel also when the dog moves at a walk or a slow trot. Shoulders: with very well developed musculature, pointing backwards, make up an angle of 45° with a horizontal line. Elbows: fit snugly to the chest. Pasterns: slightly sloping. Forelegs: large, proportionate to the body, rounded and gathered into a ball, with strong and compact fingers. There are well-developed webs between the fingers. The claws are black in black and white-black dogs, horn—colored in brown. If the fingers are white, the claws may not be black. Since the driving force for cargo transportation, swimming and sweeping movements mainly depends on the hind limbs, their structure is very important. The pelvis should be strong, wide and long. Thighs are broad and muscular. The knee angles are well defined, but not so much as to give the impression of half-bent limbs. The shins are strong and quite long. The metatarsals are low and wide set, relatively short, parallel; not turned either inwards or outwards. The hind legs are strong, well closed. The color of the claws is the same as on the front paws. The dewclaws, if present, should be removed. The tail acts as a rudder when the Newfoundland is swimming, so it should be strong and wide at the base. When the dog is standing, the tail is lowered down and slightly curved at the end; it reaches approximately to the hock joint or descends slightly below it. If the dog is moving or excited, the tail is held high, slightly curved upwards, but never thrown on its back and not tucked between its legs. 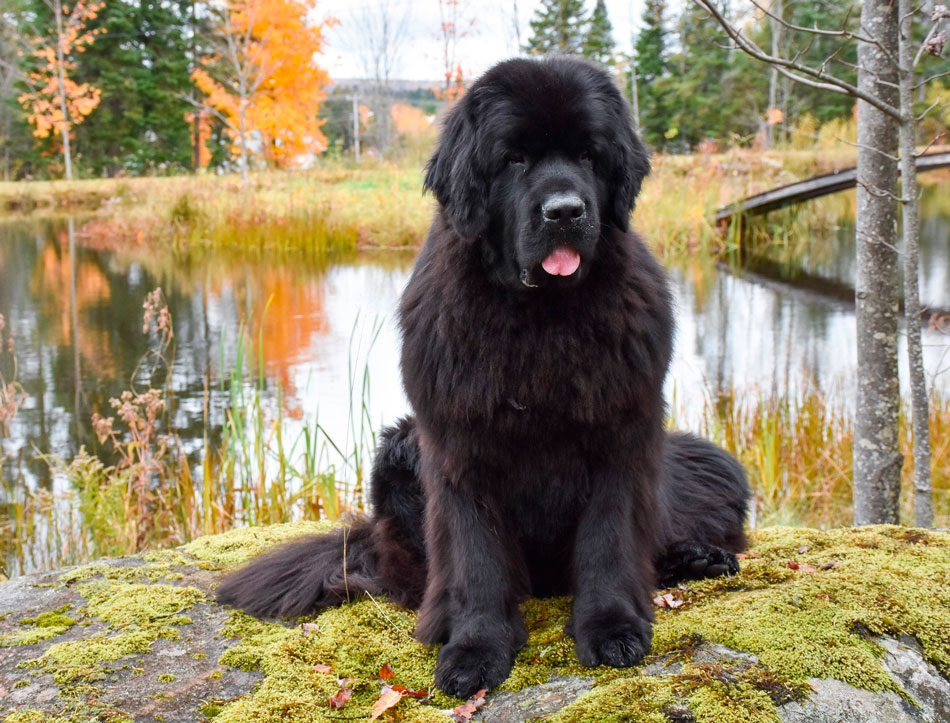 Newfoundland has a water-repellent double coat. The guard hairs are relatively long and straight, without curls. Slight undulation is acceptable. The undercoat is soft and thick, thicker in winter than in summer, but is always represented to a certain extent on the croup and on the chest. On the head, muzzle and ears, the hair is short and soft. On the fore and hind limbs there are feathering. The tail is covered with long, thick hair, but not in the shape of a flag. The color is black, white-black and brown. The traditional color is black. The color should be as saturated as possible, but when burning out in the sun, a light brown shade is allowed. White markings on the chest, fingers and (or) the tip of the tail are allowed. The white-black variety has historical significance for the breed. Preferably the following arrangement of spots: a black head with a white groove descending to the muzzle, a black saddle with evenly spaced spots and a black spot on the croup, capturing the base of the tail. The remaining parts should be white, the krap can be represented minimally. Brown uniform color from chocolate to bronze. White markings on the chest, fingers and (or) the tip of the tail are allowed. White-black and brown dogs are exhibited in the same class as black ones.

The character of the Newfoundland, according to the totality of its qualities, apparently has no analogues among other dog breeds. This is due to the specific conditions of its formation.

Fishermen, who are the "authors" of this breed, had no one to hunt on a small, rocky island. Much more important to them were his qualities as a companion and assistant. Therefore, Newfoundland is characterized by a patronizing attitude towards various "living creatures" (of course, there are exceptions).

Newfoundland is not just a "smart" dog (this definition is rather vague), he has a tendency to make independent decisions in a variety of situations.

The inhabitants of the island needed a dog that would help them pull nets out of the water, independently transported goods over a long distance, looked after children, calmly behaved in a boat during a storm, helped to find the shore in fog, etc. Gradually, by artificial selection, an intellectual dog was formed, able to decide which it is the actions to take in response to this or that event. It is this circumstance that has led to the fact that Newfoundland is not the most suitable dog for those who need absolute obedience. Meaningless (from his point of view), Newfoundland will simply ignore the command or execute it in its own way. On the other hand, in an emergency situation, Newfoundland acts with lightning speed, without any command, and often makes the only right decision. 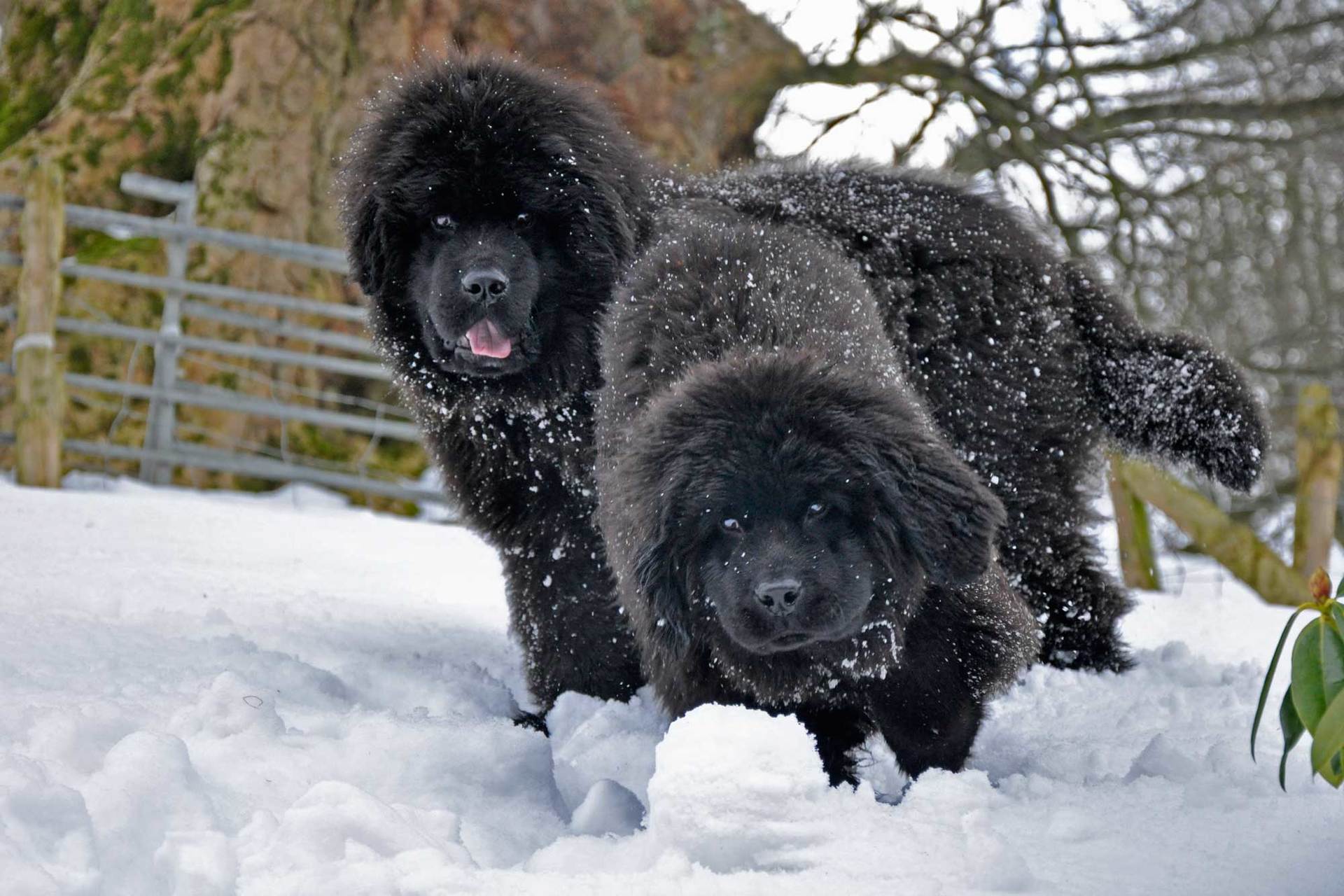 Newfoundland is devoid of aggression towards people.

This quality is also a product of selection. A dog working side by side with people, in very difficult, dangerous conditions, should be exactly like this. Moreover, a dog capable of jumping into the water on command (or without any command, see above) to save a drowning person. Therefore, you should not start a Newfoundland "for protection". He loves people too much for that. However, this does not mean that in case of danger, Newfoundland will not be able to stand up for itself or its owner. But it is useless to incite him — he will make the decision himself. Attacking Newfoundland is a very impressive sight. The main defensive technique that these dogs do not need to be taught is to stand between the owner and the offender, in extreme cases — to knock the offender off his feet. This is not difficult, with the weight of an adult male in 70-80 kg. Newfoundland is not capable of seriously biting a person under any circumstances.

It should be noted that all of the above qualities are an "average" portrait of Newfoundland. Much in the character of a particular dog depends on heredity and upbringing. But aggression towards humans (and other dogs) is considered a disadvantage, which, depending on the severity, can be disqualifying. Such a dog is culled and does not participate in further breeding.

It should be noted that Newfoundlands are not afraid of much. Neither cars, nor trains, nor planes, nor even fire make any negative impression on them. For many animals, traveling on public transport is a huge stress. For Newfoundland, transportation means an exciting journey, no matter where. The main thing is that you can see something new, get to know someone. Therefore, Newfoundlanders have to be taught that a speeding car or a burning fire can carry a huge danger.

Newfoundlands are social, social animals. They constantly need communication (both visual, sound, tactile, and emotional contact) with people, with "family", with other dogs. Newfoundland always, even at a fairly advanced age or in a state of illness, does not mind playing, having fun running and jumping. Newfoundlanders can easily learn both the usual "give a paw" tricks, and much more complex actions — for example, using electrical appliances.

Newfoundland is pleased to be useful. He will be happy to carry a light bag in his teeth, drag an arbitrarily heavy sled with any load around his neck, look after children (all, including "strangers"), especially on the water — in no case will he let the child go deeper than he reaches the bottom with his paws. Especially worth noting is the attitude towards children: Newfoundlands are extremely patient creatures. Where willpower is not enough for either a person or a shepherd dog, Newfoundland will stoically tolerate all the bullying of children, and even control their actions. 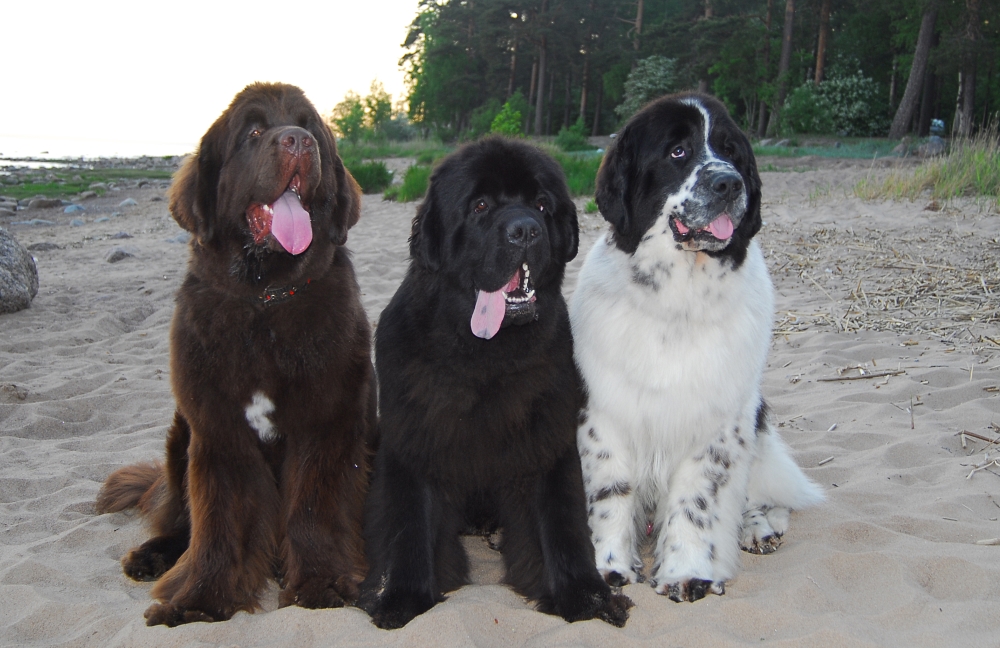 Newfoundlands are very curious. This is expressed not only in the passion for travel and new acquaintances, but also for everyday life. Newfoundlands closely monitor any (housework, repairs, games, etc.) actions of people. Newfoundlanders are particularly curious about objects or phenomena that arouse human interest. Such an object, by all means, must be carefully examined, sniffed and touched with a paw.

Newfoundland somehow knows with a sixth sense where and what hurts a person. And not necessarily open wounds. He tries to lick the sore spot thoroughly and warm it with his body, which relieves pain and accelerates healing. This is especially useful for people with diseases of the joints of the hands and feet. The things knitted from Newfoundland wool are very warm.

Newfoundlanders often have dreams. During dreams, he can whine, scratch his paws or, conversely, quietly rejoice at something and wave his tail.

In the USSR, on the basis of the breed, by crossing with Caucasian and Central Asian shepherds, they tried to breed a dog breed "Moscow diver", which would combine strength, intelligence, endurance and love of Newfoundland water and the malice of a shepherd dog, but these attempts were later recognized as futile. 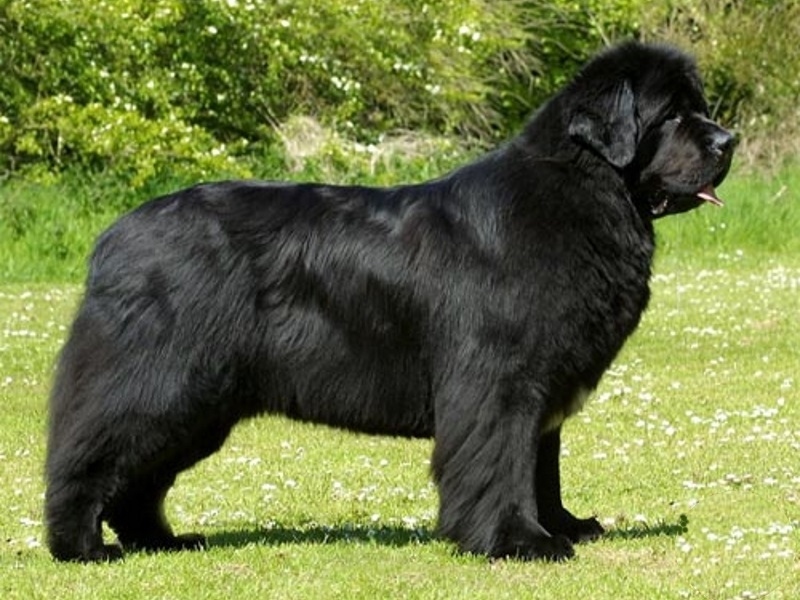