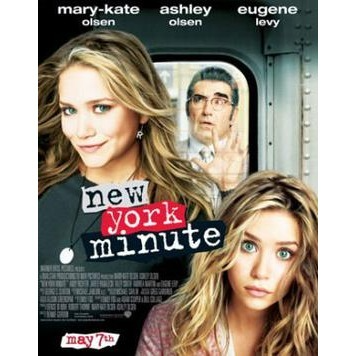 New York Minute is a 2004 American teen comedy film directed by Dennie Gordon and starring Mary-Kate Olsen, Ashley Olsen, and Eugene Levy, with Andy Richter, Jared Padalecki, Riley Smith, and Andrea Martin in supporting roles. In the film, Mary-Kate and Ashley portray twins with opposing personalities who have a series of adventures around New York City. The film reunited the Olsens with Bob Saget (in a non-speaking cameo) since they all starred together on the television series Full House (1987–1995).

It was released on May 7, 2004, by Warner Bros. Pictures, marking the Olsen twins' second theatrical film release after It Takes Two (1995), after years of strictly starring in direct-to-video and television film productions. Consequently, it was the last film featuring both Mary-Kate and Ashley to date, as the former went on to appear in her own acting projects while the latter quit acting shortly after the film's release. This was also last film to be produced by the Olsens' Dualstar Entertainment company before it went into dormancy. The film received generally negative reviews from critics and was a box office bomb, however, several publications have since re-evaluated the film as a cult film in the years after its initial release.

"Created via: Web app"
Kateryna Winterbottom created this topic on 30 May, 2022
Edits made to:
Infobox (+1 properties)