A neuron or nerve cell is an electrically excitable cell that communicates with other cells via specialized connections called synapses. It is the main component of nervous tissue in all animals except sponges and placozoa. Plants and fungi do not have nerve cells.

Neurons are typically classified into three types based on their function. Sensory neurons respond to stimuli such as touch, sound, or light that affect the cells of the sensory organs, and they send signals to the spinal cord or brain. Motor neurons receive signals from the brain and spinal cord to control everything from muscle contractions to glandular output. Interneurons connect neurons to other neurons within the same region of the brain or spinal cord. A group of connected neurons is called a neural circuit.

A typical neuron consists of a cell body (soma), dendrites, and a single axon. The soma is usually compact. The axon and dendrites are filaments that extrude from it. Dendrites typically branch profusely and extend a few hundred micrometers from the soma. The axon leaves the soma at a swelling called the axon hillock, and travels for as far as 1 meter in humans or more in other species. It branches but usually maintains a constant diameter. At the farthest tip of the axon's branches are axon terminals, where the neuron can transmit a signal across the synapse to another cell. Neurons may lack dendrites or have no axon. The term neurite is used to describe either a dendrite or an axon, particularly when the cell is undifferentiated.

Most neurons receive signals via the dendrites and soma and send out signals down the axon. At the majority of synapses, signals cross from the axon of one neuron to a dendrite of another. However, synapses can connect an axon to another axon or a dendrite to another dendrite.

The signaling process is partly electrical and partly chemical. Neurons are electrically excitable, due to maintenance of voltage gradients across their membranes. If the voltage changes by a large enough amount over a short interval, the neuron generates an all-or-nothing electrochemical pulse called an action potential. This potential travels rapidly along the axon, and activates synaptic connections as it reaches them. Synaptic signals may be excitatory or inhibitory, increasing or reducing the net voltage that reaches the soma.

In most cases, neurons are generated by neural stem cells during brain development and childhood. Neurogenesis largely ceases during adulthood in most areas of the brain. 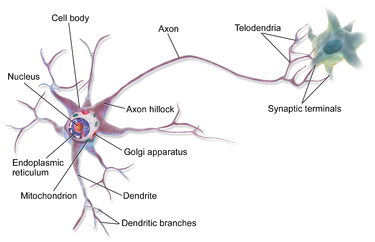 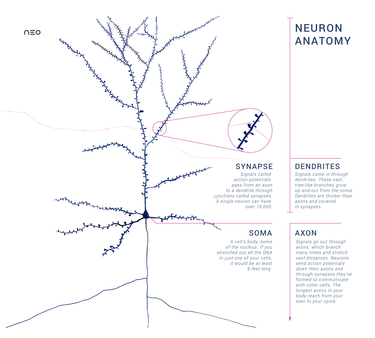 Neurons are highly specialized for the processing and transmission of cellular signals. Given their diversity of functions performed in different parts of the nervous system, there is a wide variety in their shape, size, and electrochemical properties. For instance, the soma of a neuron can vary from 4 to 100 micrometers in diameter.

The soma is the body of the neuron. As it contains the nucleus, most protein synthesis occurs here. The nucleus can range from 3 to 18 micrometers in diameter.

The dendrites of a neuron are cellular extensions with many branches. This overall shape and structure is referred to metaphorically as a dendritic tree. This is where the majority of input to the neuron occurs via the dendritic spine.

The axon is a finer, cable-like projection that can extend tens, hundreds, or even tens of thousands of times the diameter of the soma in length. The axon primarily carries nerve signals away from the soma, and carries some types of information back to it. Many neurons have only one axon, but this axon may—and usually will—undergo extensive branching, enabling communication with many target cells. The part of the axon where it emerges from the soma is called the axon hillock.

Besides being an anatomical structure, the axon hillock also has the greatest density of voltage-dependent sodium channels. This makes it the most easily excited part of the neuron and the spike initiation zone for the axon. In electrophysiological terms, it has the most negative threshold potential.

While the axon and axon hillock are generally involved in information outflow, this region can also receive input from other neurons.

The accepted view of the neuron attributes dedicated functions to its various anatomical components; however, dendrites and axons often act in ways contrary to their so-called main function. 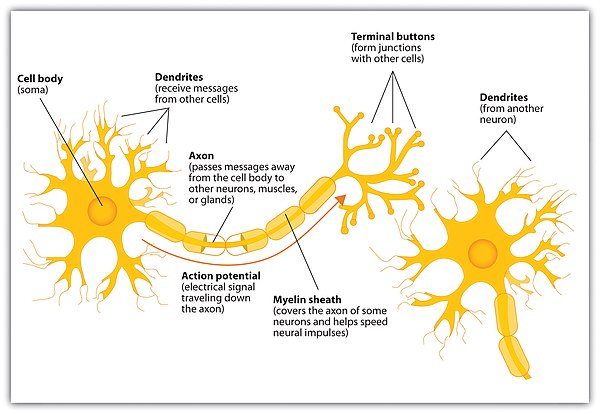 Axons and dendrites in the central nervous system are typically only about one micrometer thick, while some in the peripheral nervous system are much thicker. The soma is usually about 10–25 micrometers in diameter and often is not much larger than the cell nucleus it contains. The longest axon of a human motor neuron can be over a meter long, reaching from the base of the spine to the toes.

Sensory neurons can have axons that run from the toes to the posterior column of the spinal cord, over 1.5 meters in adults. Giraffes have single axons several meters in length running along the entire length of their necks. Much of what is known about axonal function comes from studying the squid giant axon, an ideal experimental preparation because of its relatively immense size (0.5–1 millimeters thick, several centimeters long).

however, stem cells present in the adult brain may regenerate functional neurons throughout the life of an organism (see neurogenesis). Astrocytes are star-shaped glial cells. They have been observed to turn into neurons by virtue of their stem cell-like characteristic of pluripotency. 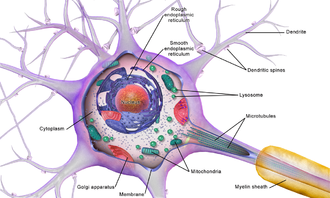 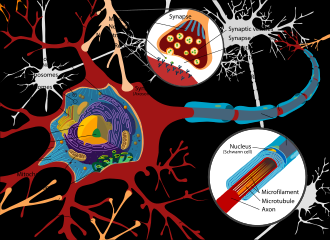 Like all animal cells, the cell body of every neuron is enclosed by a plasma membrane, a bilayer of lipid molecules with many types of protein structures embedded in it. A lipid bilayer is a powerful electrical insulator, but in neurons, many of the protein structures embedded in the membrane are electrically active. These include ion channels that permit electrically charged ions to flow across the membrane and ion pumps that chemically transport ions from one side of the membrane to the other. Most ion channels are permeable only to specific types of ions. Some ion channels are voltage gated, meaning that they can be switched between open and closed states by altering the voltage difference across the membrane. Others are chemically gated, meaning that they can be switched between open and closed states by interactions with chemicals that diffuse through the extracellular fluid. The ion materials include sodium, potassium, chloride, and calcium. The interactions between ion channels and ion pumps produce a voltage difference across the membrane, typically a bit less than 1/10 of a volt at baseline. This voltage has two functions: first, it provides a power source for an assortment of voltage-dependent protein machinery that is embedded in the membrane; second, it provides a basis for electrical signal transmission between different parts of the membrane.

Numerous microscopic clumps called Nissl bodies (or Nissl substance) are seen when nerve cell bodies are stained with a basophilic ("base-loving") dye. These structures consist of rough endoplasmic reticulum and associated ribosomal RNA. Named after German psychiatrist and neuropathologist Franz Nissl (1860–1919), they are involved in protein synthesis and their prominence can be explained by the fact that nerve cells are very metabolically active. Basophilic dyes such as aniline or (weakly) haematoxylin highlight negatively charged components, and so bind to the phosphate backbone of the ribosomal RNA.

The cell body of a neuron is supported by a complex mesh of structural proteins called neurofilaments, which together with neurotubules (neuronal microtubules) are assembled into larger neurofibrils. Some neurons also contain pigment granules, such as neuromelanin (a brownish-black pigment that is byproduct of synthesis of catecholamines), and lipofuscin (a yellowish-brown pigment), both of which accumulate with age. Other structural proteins that are important for neuronal function are actin and the tubulin of microtubules. Class III β-tubulin is found almost exclusively in neurons. Actin is predominately found at the tips of axons and dendrites during neuronal development. There the actin dynamics can be modulated via an interplay with microtubule.

There are different internal structural characteristics between axons and dendrites. Typical axons almost never contain ribosomes, except some in the initial segment. Dendrites contain granular endoplasmic reticulum or ribosomes, in diminishing amounts as the distance from the cell body increases. 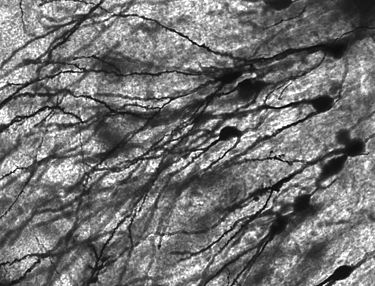 Neurons vary in shape and size and can be classified by their morphology and function. The anatomist Camillo Golgi grouped neurons into two types; type I with long axons used to move signals over long distances and type II with short axons, which can often be confused with dendrites. Type I cells can be further classified by the location of the soma. The basic morphology of type I neurons, represented by spinal motor neurons, consists of a cell body called the soma and a long thin axon covered by a myelin sheath. The dendritic tree wraps around the cell body and receives signals from other neurons. The end of the axon has branching axon terminals that release neurotransmitters into a gap called the synaptic cleft between the terminals and the dendrites of the next neuron. 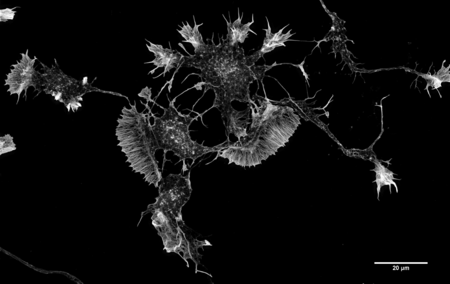 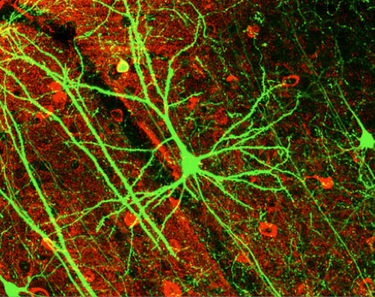