Naruto Uzumaki is a shinobi of Konohagakure's Uzumaki clan. He became the jinchūriki of the Nine-Tails on the day of his birth — a fate that caused him to be shunned by most of Konoha throughout his childhood. After joining Team Kakashi, Naruto worked hard to gain the village's acknowledgement all the while chasing his dream to become Hokage. In the following years, through many hardships and ordeals, he became a capable ninja, regarded as a hero both by the villagers, and soon after, the rest of the world, becoming known as the Hero of the Hidden Leaf. He soon proved to be one of the main factors in winning the Fourth Shinobi World War, leading him to achieve his dream and become the village's Seventh Hokage.

Naruto was born on the night of October 10th to Minato Namikaze (the Fourth Hokage) and Kushina Uzumaki (the second jinchūriki of the Nine-Tails). He was named after Naruto Musasabi, the protagonist of Jiraiya's first book, which made the Sannin his godfather.

Naruto is noted as boisterous, exuberant, and unorthodox, quite similar to Hashirama Senju. He inherited his mother's verbal tic, as he ends his sentences with "Dattebayo!" when emotional.Though he responds best to competition and is not afraid to ask for assistance, Naruto is relatively naïve and slow to understand principles or situations. He often requires an oversimplified analogy in order to grasp explanations and can even prove forgetful. Naruto is aware of his faults and admits he acts strong to mask his embarrassment and frustration about them. Despite his naivety, Naruto can be quite observant, picking up on things others miss and retaining information casually gathered through conversation. 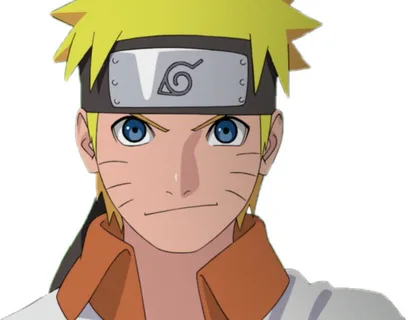 According to Jiraiya, Naruto strongly resembles his father: he has yellow-blond, spiky hair and blue eyes, while inheriting the shape of his mother's eyes and face. His trademark characteristics are the three whisker markings on his cheeks. During the Fourth Shinobi World War, Dan Katō initially mistook Naruto for Nawaki due to their stark resemblance.Naruto was rather short for his age during Part I, though he grew to be taller than Sakura in Part II. Naruto originally wore green goggles on his forehead, though he discards them upon becoming a genin.

Originally, Naruto was a rather inept ninja, failing to graduate from the Academy three times. Through sheer determination and training however, his skills rapidly improved to defeat strong genin like Neji Hyūga, Gaara, and Kabuto Yakushi, earning acknowledgement from all the Sannin for his potential. Under various tutelage, Naruto was able to defeat various members of Akatsuki, ultimately earning praise from Konohagakure as a Hokage-material hero. Naruto's personally defeated various reincarnated Kage and jinchūriki during the Fourth Shinobi World War, with many believing he was the central key to winning the battle. By adulthood, his prowess made him the Seventh Hokage, regarded as the strongest shinobi in history and having command of overwhelming jutsu. With the combined might of Sasuke, noted as his only rival as a shinobi, they are said to be able to destroy a continent.Together, they overpowered Momoshiki Ōtsutsuki who absorbed Kinshiki Ōtsutsuki, and pushed Jigen's body to its limit. Overall, he could compete against if not defeat world-threatening opponents, such as Madara Uchiha, Kaguya, Toneri Ōtsutsuki, and while fighting at his absolute peak overwhelm Isshiki Ōtsutsuki.