N,N-Dimethyltryptamine (DMT or N,N-DMT) is a chemical substance that occurs in many plants and animals and which is both a derivative and a structural analog of tryptamine. 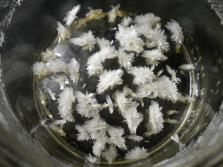 DMT can be consumed as a psychedelic drug and has historically been prepared by various cultures for ritual purposes as an entheogen. Rick Strassman labeled it "the spirit molecule". DMT is illegal in most countries. DMT has a rapid onset, intense effects and a relatively short duration of action. For those reasons, DMT was known as the "businessman's trip" during the 1960s in the United States, as a user could access the full depth of a psychedelic experience in considerably less time than with other substances such as LSD or magic mushrooms. DMT can be inhaled, injected, vaporized or ingested, and its effects depend on the dose. When inhaled or injected, the effects last a short period of time: about 5 to 15 minutes. Effects can last 3 hours or more when orally ingested along with an MAOI, such as the ayahuasca brew of many native Amazonian tribes. DMT can produce vivid "projections" of mystical experiences involving euphoria and dynamic hallucinations of geometric forms.DMT is a functional analog and structural analog of other psychedelic tryptamines such as 4-AcO-DMT, 5-MeO-DMT, 5-HO-DMT, psilocybin (4-PO-DMT), and psilocin (4-HO-DMT). The structure of DMT occurs within some important biomolecules like serotonin and melatonin, making them structural analogs of DMT.