In electronics and telecommunications, modulation is the process of varying one or more properties of a periodic waveform, or the carrier signal, with a separate signal that contains information to be transmitted.

Modulation in electronics and telecommunications is a technique for impressing information (voice, music, picture, or data) on a radio frequency carrier wave through varying one or more characteristics of the wave in accordance with the intelligence signal. These characteristics include the signals amplitude, frequency, phase, polarization, and quantum-level phenomena like spin.

Modulation is usually applied to electromagnetic signals, including radio waves, lasers, optics, and computer networks. But modulation can be applied to direct currents, such as in Morse code telegraphy or a digital current loop interface. Modulation can also be applied to low-frequency alternating current such as powerline networking.

In amplitude modulation, the height (strength or intensity) of the signal carrier is varied to represent the data added to the signal.

In BPSK, two opposite signal phases are used to break a digital signal up timewise into binary digits in order to carry information.

In FDM, numerous signals are combined for transmissions on a single communications line or channel. 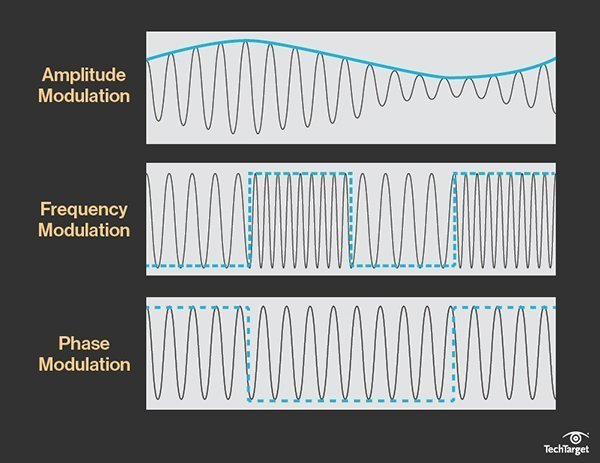 Visual example of the more popular types of frequency modulation.

Modern Wi-Fi modulation uses a combination of PSK and QAM64 or QAM256 to encode multiple bits of information into each transmitted symbol.

In amplitude modulation (AM), auditory or visual information is impressed on a carrier wave by varying the amplitude of the carrier to match the fluctuations in the audio or video signal being transmitted. 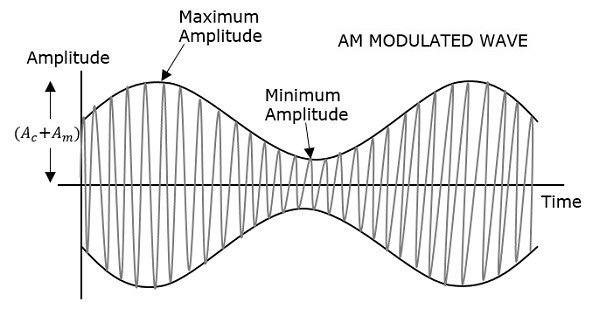 Diagram of a AM wave.

Amplitude modulation is the oldest method of broadcasting for radio programs. These stations operate at frequencies spaced 10 kHz apart between 535 and 1605 kHz. Radio waves in this frequency range are reflected by the ionosphere and can be detected by receivers many miles away. AM is also used for long-distance shortwave radio broadcasts and broadcasting the video portion of television programs.

Frequency modulation (FM) encodes information in a carrier wave through varying the frequency of the wave. FM technology is used in telecommunications, radio broadcasting, signal processing, and computing. 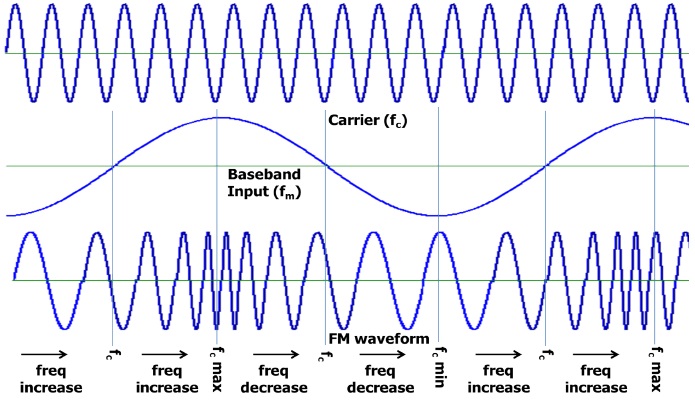 Frequency modulation is similar in practice to phase modulation, although they are not exactly equivalent. When an FM receiver is used to demodulate a PM signal, or an FM signal is intercepted by a PM receiver, the audio is distorted.

Phase modulation (PM) is a method of impressing data onto alternating-current waveform by varying the instantaneous phase of the wave. This can be used with analog or digital data. 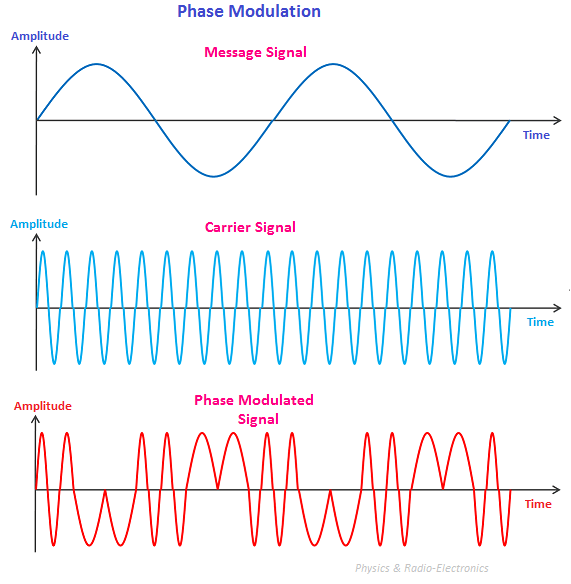 In analog PM, the phase of the AC signal wave or carrier wave varies in a continuous manner with many possible carrier phase states. The positive or negative polarity of the data input waveform shifts the carrier phase in one or the other direction, and at any instant in time the extent of the shift is directly proportional to the extent of the polarity of the signal amplitude.

In phase-shift keying (PSK) is a method of digital communication in which the phase of a transmitted signal is varied to convey information. The simplest PSK technique is binary phase-shift keying. This method uses two opposite signal phases broken up timewise into individual bits, or binary bits. The state of each of these bits is determined according to the state of the preceding bit. If the phase does not change, the signal state stays the same. This is sometimes called biphase modulation.

A main advantage of PSK is its signal-to-noise ratio, which allows communication under adverse conditions, such as severe fading, noise, or interference where other communication modes fail.

Time-division multiplexing (TDM) is a method of putting multiple data streams in a single signal by separating the signal into many segments, each having a short duration. Each data stream is reassembled at the receiving end based on the timing.

TDM allows for a variation in the number of signals being sent along a line, and can adjust the time intervals to make optimum use of the available bandwidth. In a line using TDM for data transfer, a multiplexer and demultiplexer is required at each end to assign the composite signals at one end and to separate the signals and route to proper end users at the destination.

Wavelength-division multiplexing (WDM) combines multiple signals on laser beams at various infrared wavelengths for transmission along fiber optic media. In this method, each laser is modulated by an independent set of signals. At the receiving end, wavelength sensitive filters are used. 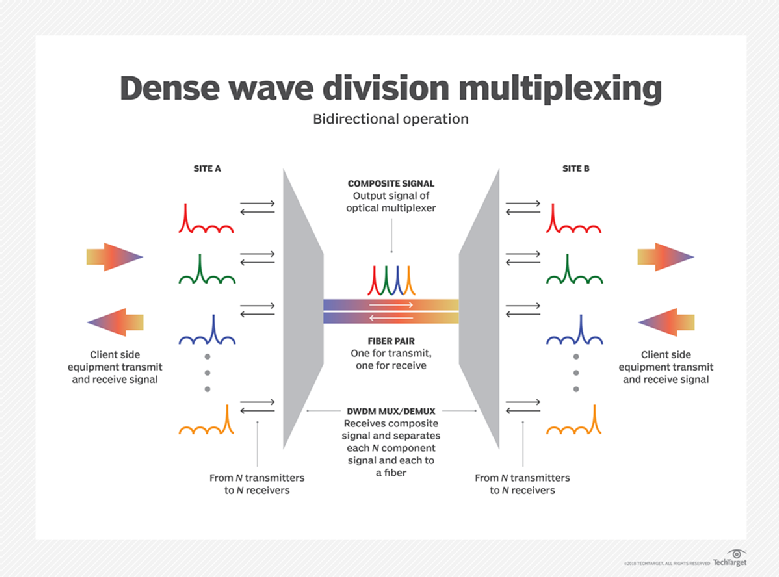 WDM is performed at the infrared portion of the electromagnetic spectrum. Each infrared channel carries several radio frequency signals combined by means of frequency-division multiplexing or time-division multiplexing. Each multiplexed infrared channel is separated, or demultiplexed, into the original signals at destination. Through the combination of these methods, data in different formats and at different speeds can be transmitted at the same time on a single fiber cable.

Frequency-division multiplexing (FDM) is a method in which numerous signals are combined for transmission on a single communications line or channel. Each signal is assigned a different frequency (or subchannel) within the main channel.

When FDM is used in a communications network, each input signal is sent and received at high speed. But when multiple signals need to be sent along a single-long distance line, the necessary bandwidth is large. FDM is often used in analog internet connections over twisted pair telephone lines.

Frequency-hopping spread spectrum (FHSS) is a method of transmitting radio signals by changing the carrier frequency among many distinct frequencies occupying a large spectral band. FHSS is used to avoid interference, prevent eavesdropping, and enable code-division multiple access communications based on the control of changes through code known to transmitter and receiver.

In FHSS systems, the signal changes (hops) carrier frequencies among the center frequencies of the sub-bands in a predetermined order. In this way, interference at a specific frequency will only affect the signal during a short interval.

In spatial modulation, digital signals are modulated to convey additional information through the on/off states of transmit antennas.

In spiral modulation, the signal modulation is changed from circles to spirals for higher spectral efficiency.

Spiral modulation is a way of using spirals in digital communications for instantaneous spectral analysis (ISA) that provides a transmission model based on sinusoids with continuously-varying amplitude. The change from circles to spirals in spiral modulation should allow for higher spectral efficiency in modulation for higher data throughput with lower signal power requirements and reduced spectral occupancy. Spiral modulation could also offer lower latency and improved resistance to coherent interference and phase noise.

Spatial modulation (SM) is a digital modulation technology which works to convey additional information through the on/off states of transmit antennas and can save the implementation cost by reducing the number of radio-frequency chains. SM can be applied in other signal domains, such as frequency, time, code, angle domain, or across multiple signal domains.

Transpositional modulation (TM) is a modulation technique demonstrated by TM Technologies, a division of Medusa Scientific, which is intended to provide true DC response while remaining transparent to other modulation formats. TM is supposed to permit the transmission of higher data rates than those possible with other forms of modulation. TM is also immune to Doppler effects while providing the capability to combine multiple, different data streams on a single TM signal.

TM Scientific claims the modulation technique is capable of meeting the data rate demands of ultra-high-definition video and other data-intensive requirements. TM Scientific is also working on developing satellite modem's for transpositional modulation.