Spiral galaxy in the local group containing the solar system

The name Milky Way is common in Western culture and is a derivative of the Latin via lactea "milky way", which in turn is a translation from the Greek ϰύϰλος γαλαξίας "milky circle"[17]. The name Galactica is derived from the Greek γαλαϰτιϰός "milky". According to Greek legend, Zeus decided to make his son Hercules, born of a mortal woman, immortal, and for this purpose put him to his sleeping wife Hera, so that Hercules would drink the divine milk. Hera, waking up, saw that she was not feeding her own child, and pushed him away from her. The stream of milk that spurted from the goddess's breast turned into the Milky Way.

In Soviet astronomy school, the Milky Way galaxy was simply called "our galaxy"[18] or "the Milky Way system"; the phrase "Milky Way"[19] was used to refer to the visible stars that optically to the observer make up the Milky Way.

There are many other names for the Milky Way in various languages. The word "path" is often retained and the word "milky" is replaced by other epithets. For example, in Arabic it is the floury way, which was formed by the scattering of flour from a leaky sack that lay on a cart. In Georgian, it is "deer's leap" ("ირმი ნახტომი"), and in Chinese, "silver river" ("銀河"). 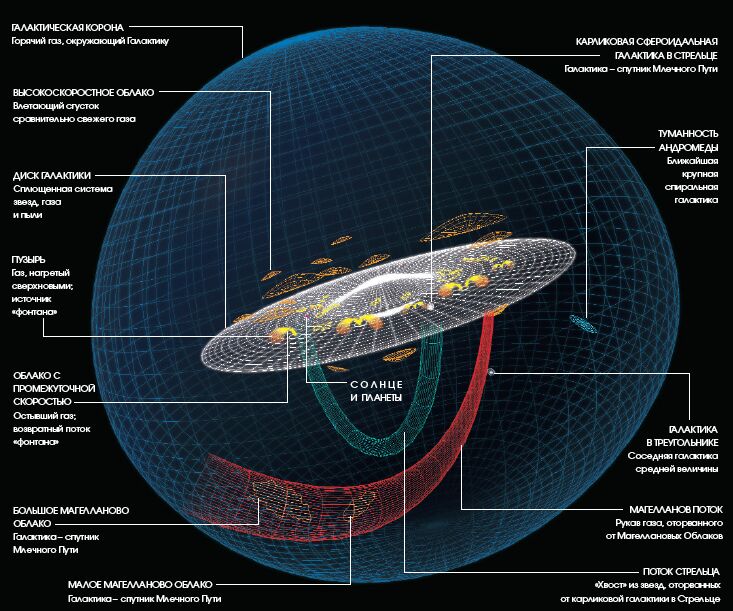 Schematic representation of the profile.

The galaxy contains, according to current estimates, 200 to 400 billion stars. Their main mass is located in the form of a flat disc[21].

Most of the mass of the galaxy is not contained in the stars and interstellar gas, but in the nonluminous halo of dark matter, so it is very difficult to accurately determine the mass of the Milky Way.

An estimate published in May 2016 by astrophysicists from Canada determined the mass of the Galaxy to be only 7⋅1011 solar masses[24].

In 2019, combining new data from the Gaia and Hubble missions, astronomers determined that the mass of the Milky Way, within 129,000 light-years of the center of the Galaxy, is about 1.5 ⋅1012 solar masses[25].

It wasn't until the 1980s that astronomers suggested that the Milky Way was a spiral galaxy with a lintel,[26] rather than an ordinary spiral galaxy. This assumption was confirmed in 2005 by the Lyman Spitzer Space Telescope, which showed that the central lintel of our galaxy is larger than previously thought[27].

Scientists estimate that the galactic disk, which protrudes in different directions near the galactic center, is about 100,000 light-years in diameter[28]. Compared to the halo, the disk rotates noticeably faster. The speed of its rotation is unequal at different distances from the center. It rises rapidly from zero at the center to 200-240 km/s at a distance of 2,000 light years from it, then decreases slightly, increases again to about the same value, and then remains almost constant. The study of the rotation of the disk made it possible to estimate its mass, which turned out to be 150 billion times greater than M⊙.

Near the plane of the disk, young stars and star clusters are concentrated, whose age does not exceed several billion years. They form the so-called planar component. Among them are a lot of bright and hot stars. Gas in the disk of the Galaxy is also concentrated mainly near its plane. It is distributed unevenly, forming numerous gas clouds - from giant, inhomogeneous in structure clouds, extending over several thousand light years, to small clouds not more than a parsec in size.

In the outer regions of the Milky Way the S-shaped stellar disk is curved in the form of a progressively twisted spiral structure[29][30][31].

Scientists from the Australian National University have determined that the magnitude of the magnetic field in the Milky Way disk is in the range of 15 to 20 μG (microgauss)[32].

According to calculations astrophysicists, based on observations of the Kepler Space Telescope mission, the average age of the thick disk of the galaxy, where 80% of the stars are, is 10 billion yea

The galactic center of the Milky Way in the infrared.

The center of the Milky Way Galaxy. Photo taken by the Spitzer Space Telescope.

In the middle part of the galaxy is a thickening called a bulge, which is about 8,300 parsecs (27,000 light years) across. The center of the galactic nucleus is in the direction of the constellation Sagittarius (α = 265°, δ = -29°)[34][35]. The distance from the Sun to the center of the Galaxy is 8500 parsecs (2.62⋅1017 km, or 27 700 light years). A supermassive black hole (Sagittarius A*) (about 4.3 million M⊙[36]) appears to be located in the center of the Galaxy, around which a black hole of average mass[37] of 1,000 to 10,000 M⊙ and a rotation period of about 100 years and several thousand relatively small[38] presumably revolves. Their joint gravitational action on the neighboring stars makes the latter move along unusual trajectories[37]. There is an assumption that most galaxies have supermassive black holes in their core[39].

The central regions of the Galaxy are characterized by a strong concentration of stars: each cubic parsec near the center contains many thousands of them. The distances between the stars are tens or hundreds of times smaller than in the vicinity of the Sun. As in most other galaxies, the distribution of mass in the Milky Way is such that the orbital velocity of most stars in the galaxy does not depend significantly on their distance from the center. Further from the central lintel to the outer circle, the usual orbital velocity of stars is 210-240 km/s. This speed distribution, not observed in the solar system, where different orbits have significantly different orbital velocities, is one indication of the existence of dark matter.

It is believed that the length of the galactic jumper is about 27,000 light years[26]. This jumper passes through the center of the galaxy at an angle of 44 ± 10 degrees to the line between our Sun and the center of the galaxy. It consists mostly of red stars, which are considered to be very old. The jumper is surrounded by a ring called the Five-Kiloparsec Ring. This ring contains most of the galaxy's molecular hydrogen and is the active star-forming region of our galaxy. If observed from the Andromeda Galaxy, the Milky Way's galactic junction would be a bright part of it[40].

In 2016, Japanese astrophysicists reported the discovery of a second giant black hole at the Galactic center. This black hole is located 200 light years from the center of the Milky Way. The observed astronomical object with a cloud occupies a region of space 0.3 light years in diameter, and its mass is 100 thousand solar masses. So far, the nature of this object - it is a black hole or other object[41] - has not been accurately established.

In 2018, based on observations from the Chandra X-ray Space Laboratory at the Galactic Center, 12 low-mass X-ray double systems were detected, one component of which could very likely be a stellar-mass black hole. It is possible that there could be 10-20 thousand black holes within 1 parsec (3.26 light years) of a supermassive black hole, which is associated with the compact radio source Sagittarius A*[42].

The galaxy belongs to the class of spiral galaxies, which means that the galaxy has spiral arms located in the plane of the disk. The disk is immersed in a spherical halo, and there is a spherical corona around it. The solar system is located at a distance of 8.5 thousand parsecs from the galactic center, near the plane of the Galaxy (displacement to the North Pole of the Galaxy is only 10 parsecs), on the inner edge of the arm, called the Orion arm. This location makes it impossible to observe the shape of the arms visually. New data from molecular gas (CO) observations suggest that our Galaxy has two arms, beginning at the bar in the inner part of the Galaxy. In addition, there are a couple of other arms in the inner part. These arms then transition into the four-arm structure observed in the neutral hydrogen line in the outer parts of the

The vicinity of the Milky Way and its halo.

The galactic halo is spherical in shape, extending 5-10 thousand light-years beyond the galaxy,[44] and has a temperature of about 5⋅105 K[44]. The galactic disk is surrounded by a spheroidal halo consisting of old stars and globular clusters, 90% of which are less than 100,000 light years away[45] from the center of the galaxy. Recently, however, several globular clusters, such as Pal 4 and AM 1, have been found to be more than 200,000 light-years away from the center of the galaxy. The center of symmetry of the Milky Way halo coincides with the center of the galactic disk. The halo consists mainly of very old, low-bright, low-mass stars. They occur both singly and in the form of globular clusters, which may contain up to a million stars. The age of the population of the spherical component of the Galaxy exceeds 12 billion years, it is usually considered to be the age of the Galaxy itself.

While the galactic disk contains gas and dust, which complicates the passage of visible light, the spherical component contains no such components. Active star formation occurs in the disk (especially in the spiral arms, which are zones of increased density). In the halo, star formation has ended. Scattered clusters also occur predominantly in the disk. It is believed that the bulk of our galaxy's mass is dark matter, which forms a dark matter halo with a mass of about 600-3000 billion M⊙. The dark matter halo is concentrated toward the center of the galaxy[46].

Stars and star clusters of the halo move around the center of the galaxy in very elongated orbits. Since the rotation of individual stars is somewhat random (i.e., the velocities of neighboring stars can have any directions), the halo as a whole rotates very slowly.

The total luminosity of the Milky Way is estimated to be 2.1+0.9

Scientists in China and Australia released an updated 3D map of the Milky Way on Tuesday.