Arabic Al-Madīnah, formally Al-Madīnah al-Munawwarah (“The Luminous City”) or Madīnat Rasūl Allāh (“City of the Messenger of God [i.e., Muhammad]”), ancient Yathrib, city located in the Hejaz region of western Saudi Arabia, about 100 miles (160 km) inland from the Red Sea and 275 miles from Mecca by road.

Medina is one of Islam’s two holiest cities, making it a key destination for millions of pilgrims traveling to Saudi Arabia for Hajj or Umrah. The city is centered around Al Masjid an Nabawi, also known as the Prophet’s ﷺ Mosque, which was constructed by the Prophet himself and is also where he is buried. Medina is where the Prophet Muhammad ﷺ lived and taught after the migration from Makkah in 622 A.D., called Hijrah. This year is so important in the history of Islam that it marks the start of the Islamic calendar. Although the city’s name is usually written as Medina in English, its full name is Al Medina Al Munawwarah, meaning “the Enlightened City.” Because of the city’s pivotal role in the Prophet Muhammad’s ﷺ life, making a trip to Medina is a lifelong dream for many Muslims. 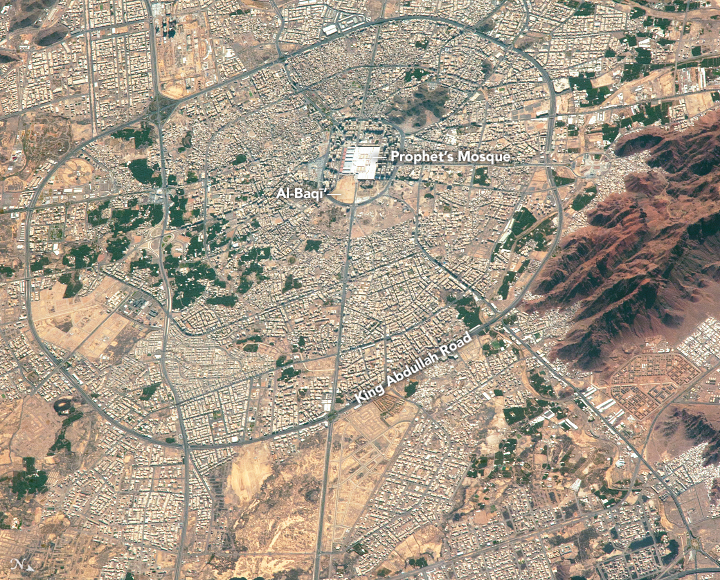 Immediately east of the Mosque is an area with no buildings. (Note that north is to the right in this photo.) It is the site of the Al-Baqi’ cemetery, the resting place of many of the Prophet’s relatives and companions. The cemetery used to lie on the outskirts of early Medina. Fourteen centuries ago, the city was only about the size of the modern mosque complex.

Although people of many religions and nationalities live in the city, the core haram zone (meaning “sanctuary” or “holy shrine”), generally within King Abdullah Road, is only open to people of Muslim faith. (For scale, the diameter of the King Abdullah ring road is about 7 to 9 kilometers or 4.5 to 5.5 miles). Increasing numbers of expatriate workers—from other Arab countries, from South Asia, and from the Philippines—now live in Medina.

The Saudi Arabian government has begun a major new building project known as Knowledge Economic City just east of the closed zone (lower center of the image). This partly open land (visible on either side of King Abdul Aziz Branch Road) is being set aside for new residential and commercial development, especially high-tech, as well as hotels, museums, and educational facilities for non-Muslim tourists.

Astronaut photograph ISS052-E-8496 was acquired on June 25, 2017, with a Nikon D4 digital camera using a 1150 millimeter lens, and is provided by the ISS Crew Earth Observations Facility and the Earth Science and Remote Sensing Unit, Johnson Space Center. The image was taken by a member of the Expedition 52 crew. The image has been cropped and enhanced to improve contrast, and lens artifacts have been removed. The International Space Station Program supports the laboratory as part of the ISS National Lab to help astronauts take pictures of Earth that will be of the greatest value to scientists and the public, and to make those images freely available on the Internet. Additional images taken by astronauts and cosmonauts can be viewed at the NASA/JSC Gateway to Astronaut Photography of Earth. Caption by Justin Wilkinson, Texas State University, JETS Contract at NASA-JSC.

Search on Google
Search on Bing
Title
Author
Date
Publisher
Description
4 women in engineering discuss harassment, isolation and perseverence
Ron Miller
June 7, 2021
TechCrunch
Four women from engineering backgrounds described daily challenges and their strong determination to be the best engineers they can be -- without all the obstruction.
Perth real estate prices are surging, with Bicton, North Beach and Sorrento leading the pack
Keane Bourke
May 13, 2021
www.abc.net.au
Real estate agents say "absolutely crazy" demand is behind 20 Perth suburbs' median house prices growing by over 10 per cent in the first third of this year.
Bill Gates homes may be up for grabs in divorce from Melinda
Jack Flemming
May 4, 2021
Los Angeles Times
Bill and Melinda Gates' divorce could put several luxury homes in play, including a cavernous estate complete with a trampoline room.
Western Reserve Area Agency on Aging to Launch Great Grocery Giveaway
The Western Reserve Area Agency on Aging
January 20, 2021
www.prnewswire.com:443
/PRNewswire/ -- The Western Reserve Area Agency on Aging (WRAAA), is launching the "Great Grocery Giveaway," kicking off January 21st and continuing through...
Saudi Arabia extends pilgrimage suspension to its own citizens
March 5, 2020
The Economic Times
Saudi nationals and residents can still visit Mecca and Medina and pray there, provided they do not go for the purpose of umrah, deputy haj minister Abdulfattah Mashat told Al Arabiya TV on Wednesday.
SHOW MORE
amana-md.gov.sa
Is a