Most maple species are trees 10-40 meters tall, but among them there are also shrubs 5-10 meters tall with a number of small branches growing from the base of the trunk. 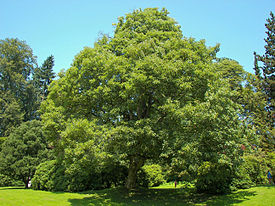 They are mostly deciduous plants, with only a few species from South Asia and the Mediterranean being evergreen.

Several species, such as Acer griseum, Acer triflorum, Acer mandshuricum and Acer maximowiczianum, have trifoliate leaves. Aspen-leaved maple (Acer negundo) has leaves that are compound pinnate and may consist of three, five, seven, and rarely nine leaves. The leaves of the hornbeam maple (Acer carpinifolium) are simple and pinnately veined, resembling those of the hornbeam.