Country in the Indian ocean, off the coast of southeast Africa

Madagascar (/ˌmædəˈɡæskər, -kɑːr/; Malagasy: Madagasikara), officially the Republic of Madagascar (Malagasy: Repoblikan'i Madagasikara, Malagasy pronunciation: [republiˈkʲan madaɡasˈkʲarə̥]; French: République de Madagascar), and previously known as the Malagasy Republic, is an island country in the Indian Ocean, approximately 400 kilometres (250 miles) off the coast of East Africa across the Mozambique Channel. At 592,800 square kilometres (228,900 sq mi) Madagascar is the world's second-largest island country, after Indonesia. The nation consists of the island of Madagascar (the fourth-largest island in the world) and numerous smaller peripheral islands. Following the prehistoric breakup of the supercontinent Gondwana, Madagascar split from the Indian subcontinent around 88 million years ago, allowing native plants and animals to evolve in relative isolation. Consequently, Madagascar is a biodiversity hotspot; over 90% of its wildlife is found nowhere else on Earth. The island's diverse ecosystems and unique wildlife are threatened by the encroachment of the rapidly growing human population and other environmental threats.

Human settlement of Madagascar occurred during or before the mid first millennium AD by Austronesian peoples, arriving on outrigger canoes from present-day Indonesia. These were joined around the 9th century AD by Bantu migrants crossing the Mozambique Channel from East Africa. Other groups continued to settle on Madagascar over time, each one making lasting contributions to Malagasy cultural life. The Malagasy ethnic group is often divided into 18 or more subgroups, of which the largest are the Merina of the central highlands.

Until the late 18th century, the island of Madagascar was ruled by a fragmented assortment of shifting sociopolitical alliances. Beginning in the early 19th century, most of the island was united and ruled as the Kingdom of Madagascar by a series of Merina nobles. The monarchy ended in 1897 when the island was absorbed into the French colonial empire, from which the island gained independence in 1960. The autonomous state of Madagascar has since undergone four major constitutional periods, termed republics. Since 1992, the nation has officially been governed as a constitutional democracy from its capital at Antananarivo. However, in a 2009 political crisis, president Marc Ravalomanana was made to resign and presidential power was transferred in March 2009 to Andry Rajoelina. Constitutional governance was restored in January 2014, when Hery Rajaonarimampianina was named president following a 2013 election deemed fair and transparent by the international community. Madagascar is a member of the United Nations, the African Union (AU), the Southern African Development Community (SADC), and the Organisation Internationale de la Francophonie.

Madagascar belongs to the group of least developed countries, according to the United Nations. Malagasy and French are both official languages of the state. The majority of the population adheres to Christianity, traditional beliefs, or an amalgamation of both. Ecotourism and agriculture, paired with greater investments in education, health, and private enterprise, are key elements of Madagascar's development strategy. Under Ravalomanana, these investments produced substantial economic growth, but the benefits were not evenly spread throughout the population, producing tensions over the increasing cost of living and declining living standards among the poor and some segments of the middle class. As of 2017, the economy has been weakened by the 2009–2013 political crisis, and quality of life remains low for the majority of the Malagasy population.

At 592,800 square kilometres (228,900 sq mi), Madagascar is the world's 47th largest country, the 2nd largest island country and the fourth-largest island. The country lies mostly between latitudes 12°S and 26°S, and longitudes 43°E and 51°E. Neighboring islands include the French territory of Réunion and the country of Mauritius to the east, as well as the state of Comoros and the French territory of Mayotte to the north west. The nearest mainland state is Mozambique, located to the west.

The prehistoric breakup of the supercontinent Gondwana resulted in the separation of East Gondwana (comprising Madagascar, Antarctica, Australia and the Indian subcontinent) and West Gondwana (Africa–South America) during the Jurassic period. around 185 million years ago. The Indo-Madagascar landmass separated from Antarctica and Australia around 125 million years ago and Madagascar separated from the Indian landmass about 88 million years ago during the Late Cretaceous. This long history of separation from other continents has allowed plants and animals on the island to evolve in relative isolation. 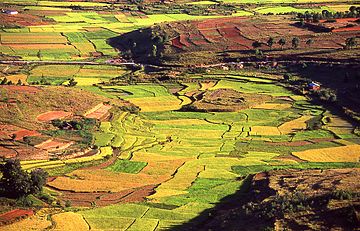 Along the length of the eastern coast runs a narrow and steep escarpment containing much of the island's remaining tropical lowland forest. To the west of this ridge lies a plateau in the center of the island ranging in altitude from 750 to 1,500 m (2,460 to 4,920 ft) above sea level. These central highlands, traditionally the homeland of the Merina people and the location of their historic capital at Antananarivo, are the most densely populated part of the island and are characterized by terraced, rice-growing valleys lying between grassy hills and patches of the subhumid forests that formerly covered the highland region. To the west of the highlands, the increasingly arid terrain gradually slopes down to the Mozambique Channel and mangrove swamps along the coast. 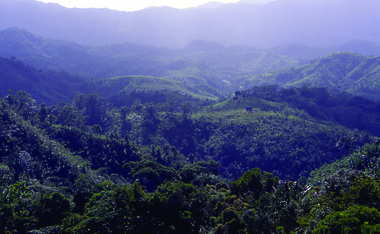 Madagascar's highest peaks rise from three prominent highland massifs: Maromokotro 2,876 m (9,436 ft) in the Tsaratanana Massif is the island's highest point, followed by Boby Peak 2,658 m (8,720 ft) in the Andringitra Massif, and Tsiafajavona 2,643 m (8,671 ft) in the Ankaratra Massif. To the east, the Canal des Pangalanes is a chain of human-made and natural lakes connected by canals built by the French just inland from the east coast and running parallel to it for some 600 km (370 mi).

The western and southern sides, which lie in the rain shadow of the central highlands, are home to dry deciduous forests, spiny forests, and deserts and xeric shrublands. Due to their lower population densities, Madagascar's dry deciduous forests have been better preserved than the eastern rain forests or the original woodlands of the central plateau. The western coast features many protected harbors, but silting is a major problem caused by sediment from the high levels of inland erosion carried by rivers crossing the broad western plains.

The combination of southeastern trade winds and northwestern monsoons produces a hot rainy season (November–April) with frequently destructive cyclones, and a relatively cooler dry season (May–October). Rain clouds originating over the Indian Ocean discharge much of their moisture over the island's eastern coast; the heavy precipitation supports the area's rainforest ecosystem. The central highlands are both drier and cooler while the west is drier still, and a semi-arid climate prevails in the southwest and southern interior of the island.

Tropical cyclones cause damage to infrastructure and local economies as well as loss of life. In 2004, Cyclone Gafilo became the strongest cyclone ever recorded to hit Madagascar. The storm killed 172 people, left 214,260 homeless and caused more than US$250 million in damage. In February 2022, Cyclone Batsirai killed at least 10 people weeks after Cyclone Ana killed 55 and displaced 130,000 people on the island.

More than 80 percent of Madagascar's 14,883 plant species are found nowhere else in the world, including five plant families. The family Didiereaceae, composed of four genera and 11 species, is limited to the spiny forests of southwestern Madagascar. Four-fifths of the world's Pachypodium species are endemic to the island. Three-fourths of Madagascar's 860 orchid species are found here alone, as are six of the world's nine baobab species. The island is home to around 170 palm species, three times as many as on all of mainland Africa; 165 of them are endemic. Many native plant species are used as herbal remedies for a variety of afflictions. The drugs vinblastine and vincristine are vinca alkaloids, used to treat Hodgkin's disease, leukemia, and other cancers, were derived from the Madagascar periwinkle. The traveler's palm, known locally as ravinala and endemic to the eastern rain forests, is highly iconic of Madagascar and is featured in the national emblem as well as the Air Madagascar logo.

Like its flora, Madagascar's fauna is diverse and exhibits a high rate of endemism. Lemurs have been characterized as "Madagascar's flagship mammal species" by Conservation International. In the absence of monkeys and other competitors, these primates have adapted to a wide range of habitats and diversified into numerous species. As of 2012, there were officially 103 species and subspecies of lemur, 39 of which were described by zoologists between 2000 and 2008. They are almost all classified as rare, vulnerable, or endangered. At least 17 species of lemur have become extinct since humans arrived on Madagascar, all of which were larger than the surviving lemur species.

A number of other mammals, including the catlike fossa, are endemic to Madagascar. Over 300 species of birds have been recorded on the island, of which over 60 percent (including four families and 42 genera) are endemic. The few families and genera of reptile that have reached Madagascar have diversified into more than 260 species, with over 90 percent of these being endemic(including one endemic family). The island is home to two-thirds of the world's chameleon species, including the smallest known, and researchers have proposed that Madagascar may be the origin of all chameleons.

Endemic fish of Madagascar include two families, 15 genera and over 100 species, primarily inhabiting the island's freshwater lakes and rivers. Although invertebrates remain poorly studied in Madagascar, researchers have found high rates of endemism among the known species. All 651 species of terrestrial snail are endemic, as are a majority of the island's butterflies, scarab beetles, lacewings, spiders, and dragonflies.

COUNTRIES AT THE CROSSROADS

Title
Author
Date
Publisher
Description
Study: Climate change not causing Madagascar drought, famine
By SETH BORENSTEIN
December 1, 2021
AP NEWS
Don't blame climate change for the devastating Madagascar drought and famine, scientists said in a new analysis Wednesday. World Weather Attribution, which does real time studies of extreme weather throughout the world, examined the drought, which has left Madagascar with 60% of its normal rainfall from July 2019 to June 2021.
Research reveals location and intensity of global threats to biodiversity
Science X staff
August 30, 2021
phys.org
Using a novel modeling approach, new research published today in Nature Ecology and Evolution reveals the location and intensity of key threats to biodiversity on land and identifies priority areas across the world to help inform conservation decision making at national and local levels.
Madagascar on the brink of climate change-induced famine
By Andrew Harding
August 24, 2021
BBC News
The country is on the brink of experiencing the world's first "climate change famine", the UN says.
Drug-resistant bacteria found in the guts of lemurs who live around humans
Marie Claire Chelini
August 9, 2021
phys.org
Antibiotic resistance, which the CDC calls one of the world's most urgent public health crises, is now being found in the guts of lemurs, our distant primate cousins.
Breakthrough research examines the effects introduced animals had on Madagascar's extinct megafauna
Science X staff
July 27, 2021
phys.org
Madagascar is renowned for its unique and varied biodiversity, which spans dry grasslands, wet rain forests, mangroves and deserts. This variety, combined with the island's isolation and size, has fostered distinctive assemblages of plants and animals, including the country's famous lemurs and baobab trees.
SHOW MORE
madagascar.gov.mg
Is a