Khotyn is a city in Dnistrovskyi Raion, Chernivtsi Oblast of western Ukraine and is located south-west of Kamianets-Podilskyi. It hosts the administration of Khotyn urban hromada, one of the hromadas of Ukraine.

Khotyn, first chronicled in 1001, is located on the right (southwestern) bank of the Dniester River, and is part of the historical region Bessarabia. Important architectural landmarks within the city include the Khotyn Fortress, constructed in the 13-15th centuries (new fortress started in 1325, major improvements in the 1380s and 1460s), and two 15th century constructions by Moldavia's ruler Stephen the Great: the Prince's Palace (Palatul Domnesc) and the city's clock tower.

Khotyn fortress is a complex of fortifications situated on the hilly right bank of the Dniester in Khotyn, Ukraine. It consists of a 13th-century stronghold and an 18th-century bastion surrounding it. It is one of the oldest preserved fortifications of Eastern Europe. 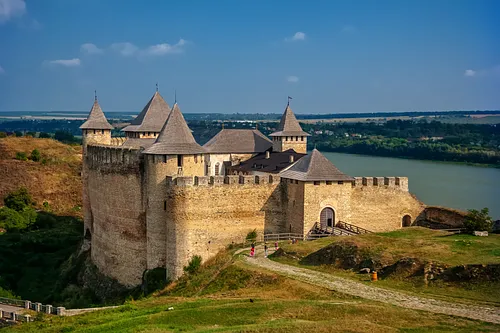 There are a few historical monuments in Ukraine that can be compared with the legendary Khotyn Fortress. It is mentioned in ancient chronicles and in letters of middle-aged governors, and, also — in memoirs. Numerous folk songs and odes, literary works were dedicated to the Khotyn fortress. But only in the middle of XX century the restoration works began. In 2000 the State historic and architectural preserve "Khotyn Fortress" was found. In 2007 the fortress was one of the winners of the action "7 Wonders of Ukraine".