Kevin De Bruyne (born June 28, 1991, Drongen, Flanders) is a Belgian footballer who plays as an attacking midfielder for Manchester City and the Belgian national team. Recognized as one of the best midfielders of our time.

Pupil of the football clubs "Ghent" and "Genk". In 2008, he began his adult career, making his debut with Genk. Subsequently, he played more than 80 matches in this team, winning the 2011 Belgian league title. In 2012, he moved to London Chelsea, but was immediately loaned to Werder Bremen. As part of the Bremen club, he became the best young player in the Bundesliga. Since January 2013, he has been playing for Wolfsburg. In the summer of 2015, Kevin became a Manchester City player. 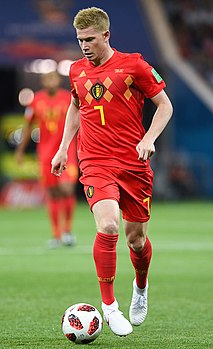 Belgian Athlete of the Year 2015. In 2015, he was recognized as the best player of the season in the Bundesliga, and in 2020 - the Player of the Season of the English Premier League.

Kevin was born and raised in the large industrial center of Belgium, Ghent. As a child, he began to play in children's tournaments and various fairs. At the age of 12, he successfully passed the selection for the local Gent. After spending two years here, De Bruyne moved to Genk, starting with performances in the youth team of the club. He made his debut in the main team of Genk against Charleroi on May 9, 2009, where his team was defeated with a score of 3:0. In the following season 2009/10, having become a player of the main squad, on February 7, 2010, he scored his first goal for Genk, securing three points for his team when a 1-0 victory was won over the Liège "Standard". In the 2010/11 season, he scored five goals in 32 matches, and his club became Belgian champions for the third time in their history.

De Bruyne warming up with Chelsea in 2013

On January 31, 2012, Genk announced the transfer of the midfielder to Chelsea, he signed a contract for five and a half years. Under the terms of the deal, De Bruyne played the rest of the 2011/12 season at Genk already on loan. On July 18, he made his debut for Chelsea in a friendly match with Seattle Sounders at number 14. At the end of July, Kevin said that if he did not have practice at Chelsea, he would go on loan:

“I have always said that the most important thing for me is to play for the team. If this does not happen at Chelsea, then I will go to another team on loan to get the necessary practice there.

A few days later, Werder Bremen became interested in the services of the young Belgian. The debut in the Championship of England took place in the match of the 1st round of the 2013/14 season against Hull City. Kevin came out in the starting lineup and in the 13th minute made an assist for the Oscar.

On August 2, 2012, a message appeared on the official website of Chelsea that Kevin would spend the 2012/13 season in the German Werder Bremen. The clubs agreed to transfer the player for 1.3 million euros. Kevin made his league debut for Werder Bremen on 24 August against champions Borussia Dortmund. The Belgian played the entire match, in which Werder Bremen lost 1-2. He scored his debut goal on September 15 against Hannover 96, equalizing the score in the match, however, in stoppage time by the referee, the leader of Hannover Szabolch Husti brought victory to his team with a score of 3: 2. Already in the next round, on September 23, De Bruyne scored the second goal for the “musicians” against Stuttgart, opening the scoring in the match. However, Werder failed to win the meeting. The match ended in a draw - 2:2. On September 25, the Belgian said he had no chance of staying in the Bundesliga:

“I know that I will have to return to Chelsea. They are well aware of my strengths. Werder will not have a chance to buy me or extend the loan. I am convinced that I have what it takes to play for a club like Chelsea".

The next day, September 26, Kevin threw the first scoring pass of the season, assisting Aaron Hunt. This pass helped Werder Bremen beat Freiburg 2-1. On December 2, De Bruyne took part in the defeat of Hoffenheim, making two assists. The match ended with a 4-1 victory for Werder Bremen. On February 9, Kevin scored a goal and made an assist to Mehmet Ekici in a game against Stuttgart, which ended in a 4-1 victory for Thomas Schaaf's men. On February 23, the Belgian scored Werder Bremen's only goal at the Allianz Arena in an away match against Bayern. However, the "musicians" suffered a crushing defeat - 1:6. In April, Borussia Dortmund and Bayer 04 became interested in Kevin. In the middle of the month, Dortmund announced that they were ready to pay 17 million euros for a talented Belgian.

On May 18, the Belgian played his last match as part of Werder Bremen. Kevin made a double, but the "musicians" lost to "Nuremberg" - 2:3. De Bruyne played 33 Bundesliga games for Werder Bremen, scoring 10 goals and providing 9 assists. In the championship, the Bremen club took 14th place.

In early June, it became known that from next season De Bruyne would play for Chelsea.

However, the Belgian failed to gain a foothold in Chelsea. He still spent the first part of the season as part of the London club, playing only three matches. On January 18, 2014, De Bruyne returned to the Bundesliga - to the Wolfsburg club for 22 million euros, with which he signed a contract until 2019. On January 21, 2014, he made his debut in a home match against Hannover 96. On April 12, De Bruyne made 2 assists in a home win against Nuremberg. A week later, he scored his first goal for the club in a match against Hamburg.

De Bruyne scored his first goal in the 2014/15 season on October 2, 2014 in a Europa League match against Lille. On October 23, in the third group match of the Europa League against Krasnodar, he scored twice, while Wolfsburg won 2-4. On January 30, 2015, De Bruyne helped win over Bayern by scoring two goals against the opponent. On March 1, 2015, he provided 3 assists in the victory against Werder Bremen. On March 12, De Bruyne scored 2 goals in the first match of the 1/8 finals of the Europa League against the Italian Inter. On March 15, he scored 1 goal and provided 2 assists in a home match against Freiburg, which ended in a 3-0 victory for the hosts.

In the 2014/15 season, he became the Bundesliga's top assistant with 21 assists. On May 30, De Bruyne scored the winning goal in the German Cup final, hitting the gates of Borussia Dortmund (the match ended with a score of 3: 1).

For the entire season, De Bruyne scored 16 goals and provided 27 assists in all competitions, and was also named German Footballer of the Year.

On August 30, 2015, Kevin returned to England on a six-year contract with Manchester City. The transfer amounted to 74 million euros, which made the Belgian the most expensive acquisition in the history of the club and the second in the history of the Premier League (after Angel Di Maria). On September 12, De Bruyne made his debut for the Citizens, replacing the injured Sergio Aguero in a match against Crystal Palace. On September 19, 2015, the Belgian struck the gates of West Ham United, scoring the first goal for Manchester City. From the very first matches, De Bruyne managed to become one of the leaders of the team, regularly giving out assists and becoming one of the leaders in this indicator (by the beginning of 2016, only Arsenal midfielder Mesut Ozil was ahead of Kevin). On January 27, 2016, De Bruyne suffered a serious injury and was out for two months. On April 2, the midfielder returned to the field and scored a goal against Bournemouth. Four days later, he scored the first goal in a 2-2 draw with PSG in the Champions League quarter-final at the Parc des Princes.

On 12 April, De Bruyne again became man of the match, scoring the winning goal against Paris Saint-Germain, thus securing Manchester City's participation in the Champions League semi-finals for the first time in the club's history, with a 3-2 aggregate score. On May 8, 2016, De Bruyne scored in a 2-2 draw against Arsenal.

On 10 September 2016, De Bruyne scored and assisted in the first Manchester derby of the season, which City won 2-1, with Kevin Man of the Match.

On September 17, 2016, De Bruyne became man of the match in a 4-0 win against Bournemouth. The football player scored the first goal, assisted in the fourth and participated in the second and third goals.

On November 1, in a 3-1 match against Barcelona, ​​Kevin scored the winning goal from a free kick, the last time Juninho Pernambucano managed to do this in 2009.

In total, in the English Premier League, Kevin gave 18 assists, breaking the club record that belonged to David Silva in the 2011/12 season (15 assists), and also scored 6 goals.

On April 7, 2021, the club extended the contract with the midfielder. The new agreement will be valid until the summer of 2025. 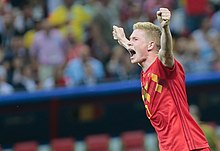 De Bruyne played for the Belgian youth team. On August 11, 2010, he made his debut for the main team in a friendly match against Finland in the city of Turku, where his team was defeated with a score of 1: 0.

In the final tournament of the 2014 World Cup in Brazil, he participated in the Belgian national team in four matches, scored one goal and gave two assists.

Kevin was included in the final 23-man bid for the Belgian national team for the 2018 FIFA World Cup. On June 18, in a game with the Panama national team (3: 0), De Bruyne assisted Romelu Lukaku. On July 6, he scored the winning goal in the quarter-final match against Brazil (2:1) and was named the man of the match. In the semi-finals, Belgium lost (1:0) to future world champions France. On July 14, in the match for third place, the Belgian team defeated the England team with a score of 2: 0.

In 2014, he published his autobiography titled Keep It Simple.

De Bruyne is fluent in Dutch, French and English.

Title
Author
Date
Publisher
Description
Euro 2020 matchday LIVE: Ukraine vs North Macedonia, Denmark vs Belgium, Netherlands vs Austria updates, news and TV reaction | Goal.com
June 17, 2021
news.google.com
Join us for live updates from all of the day's European Championship fixtures, including the latest news from the camps & TV reaction
Lucky Laporte lifts Carabao Cup kings Man City to yet another Wembley triumph
Jonathan Smith
April 25, 2021
news.google.com
Aymeric Laporte potentially should have been sent-off in the first half of the Carabao Cup final as Manchester City took on Tottenham, but he eventually emerged as the match-winner at Wembley Stadium
'De Bruyne has had enough of Man City!' - Bruce jokes about Newcastle signing Belgian star | Goal.com
June 28, 2020
news.google.com
The English manager was in a jovial mood despite seeing his side come undone at the hands of a world-class midfielder
Newcastle 0-2 Manchester City: Kevin De Bruyne and Raheem Sterling seal dominant win
By Martin Samuel for the Daily Mail
June 28, 2020
Mail Online
MARTIN SAMUEL AT ST JAMES' PARK: The best team won. Not just best in ability, but best in intention. Manchester City tried to win, Newcastle tried to stop them.
'Thierry, I'm coming for you' - De Bruyne fires warning to Premier League assist king Henry | Goal.com
April 28, 2020
news.google.com
The Manchester City playmaker Kevin De Bruyne is keen to overhaul the Frenchman's Premier League assists record if the season resumes
SHOW MORE
Is a