Who is Kaia Gerber?

Kaia Gerber is an American model and actress, well-known in the international modelling scene. With her gorgeous head turner of a face and body, she has managed to achieve roaring success at a very young age. Having the scintillating former supermodel Cindy Crawford as mother cum guide definitely helped her, but it was her talent and dedication which paved way for her to become one of the most sought after American divas today. Kaia has been quite vocal about the influences her mother had on her. It was her mother’s wish that Kaia must focus in her studies. And as a result, Kaia did well in studies and always scored good grades. The love for modelling hit her at a very young age. Her professional modelling career kicked off at the age of 10 with none other brand than ‘Versace’. She hasn’t looked back ever since. With the support of her mother and father, who also happens to be a former model, she has constantly startled the world with her strong persona and ‘goddess like’ face which apparently shares a lot of similarities with her mother’s. 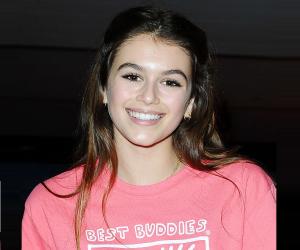 Kaia Gerber tasted the sweet taste of fame with her very first modelling assignment which arrived her way when she was just 10 years old. International luxury fashion brand Versace takes the credit for launching her into professional modelling scene with a special line for kids ‘Young Versace’.

At 13, she took the modelling industry by storm as she featured into ‘Teen Vogue’ which was nothing sort of an overwhelming achievement for her.

However, her modelling career really took off soon after she was signed with ‘IMG models’, a famed modelling agency. After that, she hasn’t looked back and has constantly climbed up the ladder of success.

In 2016, she knocked on the doors of Hollywood when she acted in a movie called ‘Sister Cities’. Her television gigs include ‘Entertainment Tonight’ and ‘Access Hollywood’ in 2016. In the very same year, she appeared on the cover of “Vogue Paris” with her mother Cindy Crawford, who also used to be a supermodel back in the days.

During the course of her brief career, Kaia has already worked with ace designers such as Alexander Wang and Miu Miu. She keeps appearing at many red carpet events and a popular face among the paparazzi.

An ultimate diva, Kaia’s gigantic fan following on social media platforms proves her popularity. Without a doubt, she is on her way to become one of the most influential faces in the fashion industry.

Who is Kaia Gerber? Everything You Need to Know

Who is Kaia Gerber? Everything You Need to Know