Journey to the Center of the Earth

Five Weeks in a Balloon

Around the world in 80 days

A Captain at Fifteen

The Children of Captain Grant

Five Weeks in a Balloon

A Winter Amid the Ice

Jules Gabriel Verne (/vɜːrn/; French: [ʒyl gabʁijɛl vɛʁn]; 8 February 1828 – 24 March 1905) was a French novelist, poet, and playwright. His collaboration with the publisher Pierre-Jules Hetzel led to the creation of the Voyages extraordinaires, a series of bestselling adventure novels including Journey to the Center of the Earth (1864), Twenty Thousand Leagues Under the Seas (1870), and Around the World in Eighty Days (1872). His novels, always very well documented, are generally set in the second half of the 19th century, taking into account the technological advances of the time.

Twenty Thousand Leagues Under the Sea

Around the World in Eighty Days

From the Earth to the Moon

Journey to the Center of the Earth

Five Weeks in a Balloon
Occupation 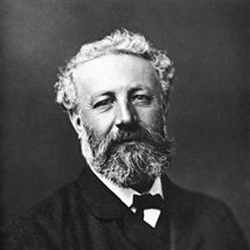