Goddess of the hearth, fire and of the right ordering of domesticity and the family; she was born into the first Olympian generation and was one of the original twelve Olympians.

She is the first child of Cronus and Rhea, the elder sister of Hades, Demeter, Poseidon, Hera, and Zeus.

Some lists of the Twelve Olympians omit her in favor of Dionysus, but the speculation that she gave her throne to him in order to keep the peace seems to be modern invention. 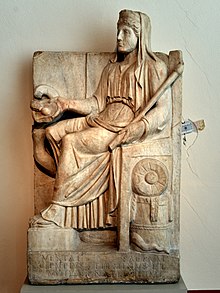 For other uses, see Hestia (disambiguation).

Goddess of the hearth, home, domesticity, virginity, family, and the state

Member of the Twelve Olympians

Symbol The hearth and its fire

Part of a series on

In the Ancient Greek religion, Hestia (/ˈhɛstiə, ˈhɛstʃə/; Greek: Ἑστία, "hearth" or "fireside") is the virgin goddess of the hearth, the right ordering of domesticity, the family, the home, and the state. In Greek mythology, she is the firstborn child of the Titans Cronus and Rhea.

Customarily, in Greek culture, Hestia received the first offering at every sacrifice in the household. In the public domain, the hearth of the prytaneum functioned as her official sanctuary, and, when a new colony was established, a flame from Hestia's public hearth in the mother city would be carried to the new settlement. The goddess Vesta is her Roman equivalent.

Hestia's name means "hearth, fireplace, altar",[2] This stems from the PIE root *wes, "burn" (ult. from *h₂wes- "dwell, pass the night, stay"). It thus refers to the oikos: the domestic, home, household, house, or family. "An early form of the temple is the hearth house; the early temples at Dreros and Prinias on Crete are of this type as indeed is the temple of Apollo at Delphi which always had its inner hestia". The Mycenaean great hall (megaron), like Homer's hall of Odysseus at Ithaca, had a central hearth. Likewise, the hearth of the later Greek prytaneum was the community and government's ritual and secular focus.[citation needed]

Section of a white marble altar on a pale background. It is a rectangular slab, with the inscription ESTIAS ISTHMIAS carved on the forward facing side.

Part of a marble altar with inscription ESTIAS ISTHMIAS, 5th – 4th century BC. The altar was dedicated to the goddess Hestia with the epithet Isthmia. Archaeological Museum of Paros.

Large square marble slab that has been engraved. The inscription states: "Beside these walls of Serapis the warden of the temple Karneades of Barke, son of Eukritos, o foreigner, and his spouse Pythias and his daughter Eraso placed to Hestia a pure altar, as a reward for this, o you that governs the marvelous dwellings of Zeus, grant to them a lovely auspiciousness of life."

Dedication of an altar to Hestia in Karneades, Taormina (undated). The inscription states: "Beside these walls of Serapis the warden of the temple Karneades of Barke, son of Eukritos, o foreigner, and his spouse Pythias and his daughter Eraso placed to Hestia a pure altar, as a reward for this, o you that governs the marvelous dwellings of Zeus, grant to them a lovely auspiciousness of life."

The worship of Hestia was centered around the hearth. The hearth was essential for warmth, food preparation, and the completion of sacrificial offerings to deities. It was a common practice that she was respected by being offered the first and last libations of wine at feasts. Pausanias writes that the Eleans sacrifice first to Hestia and then to other gods.[8] Xenophon in Cyropaedia wrote that Cyrus the Great sacrificed first to Hestia, then to sovereign Zeus, and then to any other god that the magi suggested.

The accidental or negligent extinction of a domestic hearth-fire represented a failure of domestic and religious care for the family; failure to maintain Hestia's public fire in her temple or shrine was a breach of duty to the broad community. A hearth fire might be deliberately, ritually extinguished at need, and its lighting or relighting should be accompanied by rituals of completion, purification, and renewal, comparable with the rituals and connotations of an eternal flame and of sanctuary lamps. At the level of the polis, the hearths of Greek colonies and their mother cities were allied and sanctified through Hestia's cult. Athenaeus, in the Deipnosophistae, writes that in Naucratis the people dined in the Prytaneion on the natal day of Hestia Prytanitis (Ancient Greek: Ἑστίας Πρυτανίτιδος).

Responsibility for Hestia's domestic cult usually fell to the leading woman of the household, although sometimes to a man. Hestia's rites at the hearths of public buildings were usually led by holders of civil office; Dionysius of Halicarnassus testifies that the prytaneum of a Greek state or community was sacred to Hestia, who was served by the most powerful state officials.[11] However, evidence of her priesthood is extremely rare. Most stems from the early Roman Imperial era, when Sparta offers several examples of women with the priestly title "Hestia"; Chalcis offers one, a daughter of the local elite. Existing civic cults to Hestia probably served as stock for the grafting of Greek ruler-cult to the Roman emperor, the Imperial family, and Rome itself. In Athens, a small seating section at the Theatre of Dionysus was reserved for priesthoods of "Hestia on the Acropolis, Livia, and Julia", and of "Hestia Romain" ("Roman Hestia", thus "The Roman Hearth" or Vesta). At Delos, a priest served "Hestia the Athenian Demos" (the people or state) "and Roma". An eminent citizen of Carian Stratoniceia described himself as a priest of Hestia and several other deities, as well as holding several civic offices. Hestia's political and civic functions are further evidenced by her very numerous privately funded dedications at civic sites, and the administrative rather than religious titles used by the lay-officials involved in her civic cults.

Every private and public hearth or prytaneum was regarded as a sanctuary of the goddess, and a portion of the sacrifices, to whatever divinity they were offered, belonged to her. A statue of her reportedly existed in the Athenian Prytaneum:

"Hard by is the Prytaneon (Prytaneum) [the town-hall of Athens] . . . and figures are placed off the goddesses Eirene and Hestia."[13]

Diodorus Siculus, wrote that Theramenes leaped up to the altar of Hestia at the Council Chamber, yelling:

"I flee for refuge to the gods, not with the thought that I shall be saved, but to make sure that my slayers will involve themselves in an act of impiety against the gods."[14]

However, there were very few temples dedicated to Hestia. Pausanias mention only two, in Ermioni and in Sparta:

Xenophon at Hellenica mention a temple of Hestia at the Olympia:

When, however, they had pursued the enemy to the space between the senate-house and the temple of Hestia and the theatre which adjoins these buildings, although they fought no less stoutly and kept pushing the enemy towards the altar, still, since they were pelted from the roofs of the porticoes, the senate-house, and the great temple, and were themselves fighting on the ground-level, some of the Eleans were killed, among them Stratolas himself, the leader of the Three Hundred

Homeric Hymn 24, To Hestia, is a brief invocation of five lines:

Hestia, you who tend the holy house of the lord Apollo, the Far-shooter at goodly Pytho, with soft oil dripping ever from your locks, come now into this house, come, having one mind with Zeus the all-wise: draw near, and withal bestow grace upon my song.[18]

Homeric Hymn 29, To Hestia, is another invocation for the goddess and to Hermes:

Hestia, in the high dwellings of all, both deathless gods and men who walk on earth, you have gained an everlasting abode and highest honor: glorious is your portion and your right. For without you mortals hold no banquet, -- where one does not duly pour sweet wine in offering to Hestia both first and last. And you, slayer of Argus (Hermes's epithet), Son of Zeus and Maia, the messenger of the blessed gods, bearer of the goldenrod, the giver of good, be favorable and help us, you and Hestia, the worshipful and dear. Come and dwell in this glorious house in friendship together; for you two, well knowing the noble actions of men, aid on their wisdom and their strength. Hail, Daughter of Cronos, and you also, Hermes, bearer of the goldenrod! Now I will remember you and another song also.[19]

There is also an Orphic Hymn dedicated to Hestia.[20] And, the 11th Nemean ode of Pindar writes about Hestia.[21][22]

Dedication with military oaths, found at Acharnai, from the Sanctuary of Ares and Athena Areia, dated 350-325 BC. In one of these oaths, the Hestia is mentioned