Messenger of the gods; god of travel, commerce, communication, borders, eloquence, diplomacy, thieves, and games. He was also the guide of dead souls.

The son of Zeus and the nymph Maia. The second-youngest Olympian, just older than Dionysus.

His symbols include the caduceus (staff entwined with two snakes), winged sandals and cap, stork, and tortoise (whose shell he used to invent the lyre). 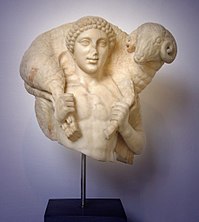 Kriophoros Hermes (which takes the lamb), late-Roman copy of Greek original from the 5th century BC. Barracco Museum, Rome

Hermes (/ˈhɜːrmiːz/; Greek: Ἑρμῆς) is an Olympian deity in ancient Greek religion and mythology. Hermes is considered the herald of the gods. He is also considered the protector of human heralds, travellers, thieves, merchants, and orators.[5]He is able to move quickly and freely between the worlds of the mortal and the divine, aided by his winged sandals. Hermes plays the role of the psychopomp or "soul guide"—a conductor of souls into the afterlife.

In myth, Hermes functioned as the emissary and messenger of the gods, and was often presented as the son of Zeus and Maia, the Pleiad. He is regarded as "the divine trickster," about which the Homeric Hymn to Hermes offers the most well-known account.

His attributes and symbols include the herma, the rooster, the tortoise, satchel or pouch, talaria (winged sandals), and winged helmet or simple petasos, as well as the palm tree, goat, the number four, several kinds of fish, and incense. However, his main symbol is the caduceus, a winged staff intertwined with two snakes copulating and carvings of the other gods. His attributes had previously influenced the earlier Etruscan god Turms, a name borrowed from the Greek "herma".

In Roman mythology, Hermes was known as Mercury, a name derived from the Latin merx, meaning "merchandise," and the origin of the words "merchant" and "commerce

In Praise of Hermes: Nine Days of Devotion to the God

Title
Author
Date
Publisher
Description
Why is this weird, metallic star hurtling out of the Milky Way?
Science X staff
August 2, 2021
phys.org
About 2,000 light-years away from Earth, there is a star catapulting toward the edge of the Milky Way. This particular star, known as LP 40−365, is one of a unique breed of fast-moving stars--remnant pieces of massive white dwarf stars--that have survived in chunks after a gigantic stellar explosion.
Hermes couriers claim they were told to accept pay cuts or lose work
Kevin Rawlinson
June 3, 2021
the Guardian
Allegations of exploitative working practices referred to parliamentary committee
Barnsley posts UK's strongest growth in job opportunities
Richard Partington Economics correspondent
April 21, 2021
the Guardian
Northern and Midlands towns with major distribution centres record best employment prospects
My Le Creuset pans are 'prohibited' delivery items, says Hermes
Anna Tims
April 15, 2021
the Guardian
I had paid for insurance to cover the damage but now it says I am not covered
Is the Dream of Cold Fusion Still a Possibility?
Patrick J. Kiger
January 23, 2021
HowStuffWorks
Though a highly publicized 1989 cold fusion breakthrough was subsequently discredited, research is still being conducted in hopes of future success.
SHOW MORE