Famous As: King of England

Who was Henry VII of England?

Henry VII, also known as Harri Tudur, earl of Richmond, was the King of England and first monarch of the ‘Tudor Dynasty.’ He attained the throne after defeating the last king of the House of York, Richard III, at the last significant battle of the ‘Wars of the Roses,’ the ‘Battle of Bosworth Field.’ He went on to secure his claim to the throne by getting married to Elizabeth of York, niece of Richard III. He reigned for around 24 years, starting from August 22, 1485. During his reign, he made efforts to strengthen the English monarchy. He introduced several economic, administrative, and diplomatic measures. He also introduced policies in an attempt to restore stability, power, and peace, while creating economic prosperity. By implementing new taxes and backing the wool industry, he got into the alum trade and signed the ‘Magnus Intercursus’ (great agreement). He remained the Lord of Ireland and King of England until his death. Upon his death, his son Henry VIII succeeded the throne. 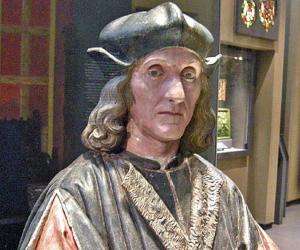 Henry VII wasted no time to honor his pledge of marrying Elizabeth of York and entered into wedlock with her on January 18, 1486.

The ‘Titulus Regius’ act had declared the marriage of Edward IV and Elizabeth Woodville invalid. It had also declared their children illegitimate, thus barring them from ascending the throne. This act was repealed by the first Parliament of Henry VII. Repealing the act reinstated the legitimacy of the children of Edward IV and Elizabeth Woodville.

Although Henry VII did not have any prior experience like his predecessors, he proved to be a provident monarch fiscally, and succeeded in establishing a stable financial administration. He restored the wealth of the exchequer which was effectively bankrupt.

He ensured better tax collection by initiating rigorous tax mechanisms, which however remained unpopular. Later, when his son Henry VIII ascended the throne, the new monarch executed the two most detested tax collectors, Edmund Dudley and Richard Empson, after charging them with treason.

The measurement system of ‘Pound Avoirdupois’ was established. This system not only became part of the system of imperial units, but also remains a part of the International pound units that prevail today.

He backed the wool industry of the island that ultimately involved him in the alum trade in 1486. He licensed ships and sold alums to the ‘Low Countries’ that were acquired from the Ottoman Empire, thus making a once expensive commodity cheap.

In February 1496, he signed the commercial treaty ‘Magnus Intercursus’ (great agreement) along with Duke Philip IV of Burgundy. The treaty was signed with other parties, such as the Holy Roman Empire, Florence, the Hanseatic League, Venice, and the Dutch Republic. This gave rise to the most thriving economic achievement of Henry VII.

He extensively used ‘Justices of the Peace’ and ‘Court of Star Chamber’ to maintain law and order in his kingdom. He also used them to curb any potential threat to the royal authority.

Henry VII of England was born.

Who was Henry VII of England? Everything You Need to Know