General Fusion is located in Burnaby Canada and was established in 2002 by the companies Chief Scientist Michel Laberge. It's magnetized target fusion team consists of over 70 research and development professionals. The team includes Ph.D. scientists from leading fusion research institutions including L’École Polytechnique in France, the Culham Centre for Fusion Technology in the UK, the Joint Institute for High Temperatures at the Russian Academy of Sciences, and Kyushu University in Japan

It uses a sphere filled with molten lead-lithium that is pumped to form a vortex. Then a pulse of magnetically-confined plasma fuel is injected into the vortex. An array of pistons around the sphere creates a pressure wave into the center of the sphere, compressing the plasma to fusion conditions. This process is then repeated, while the heat from the reaction is captured in the liquid metal and used to generate electricity via a steam turbine. 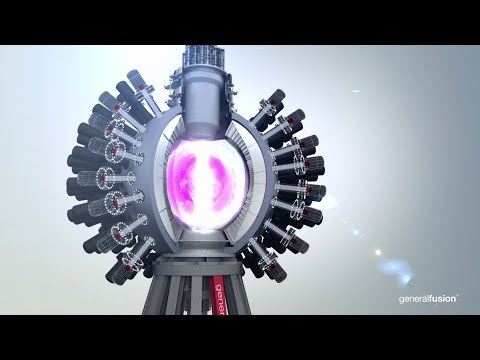 This approach does not require the lasers or giant magnets found in other fusion approaches. Also, the liquid metal wall absorbs energy from the fusion reaction which can then be pumped to heat exchangers. The liquid metal also protects the solid outer wall from damage and can be combined with liquid lithium to breed tritium within the power plant.

General Fusion investors include energy venture capital funds and the Canadian Federal Government. Its latest investment was a $65 million funding round, led by the Singapore-based investment firm, Temasek. The company will use the funds to start building a demonstration power plant, testing its fusion technology on a commercially-relevant scale.

General Fusion collaborates with leading research institutions around the world including:

Board of Directors Chairman