Ethane, a colourless, odourless, gaseous hydrocarbon (compound of hydrogen and carbon), belonging to the paraffin series; its chemical formula is C2H6. Ethane is structurally the simplest hydrocarbon that contains a single carbon–carbon bond. The second most important constituent of natural gas, it also occurs dissolved in petroleum oils and as a by-product of oil refinery operations and of the carbonization of coal. Ethane appears as a colorless odorless gas. It is easily ignited. The vapors are heavier than air. It can asphyxiate by the displacement of air. Under prolonged exposure to fire or intense heat the containers may rupture violently and rocket. Contact with the liquid may cause frostbite. 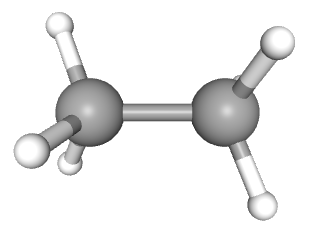 The industrial importance of ethane is based upon the ease with which it may be converted to ethylene (C2H4) and hydrogen by pyrolysis, or cracking, when passed through hot tubes. Like propane and, to a lesser extent, butane, ethane is a major raw material for the huge ethylene petrochemical industry, which produces such important products as polyethylene plastic, ethylene glycol, and ethyl alcohol.

More than 90 percent of the ethane produced in the 1960s was burned as fuel without separation from natural gas. Ethane gas can be liquefied under pressure or at reduced temperatures and thus be separated from natural gas. Unlike propane, liquid ethane is not in common use as an industrial or domestic fuel.

Search on Google News
Search on Bing News
Title
Author
Date
Publisher
Description
Ethane proxies for methane in oil and gas emissions
A'ndrea Elyse Messer
June 24, 2021
phys.org
Measuring ethane in the atmosphere shows that the amounts of methane going into the atmosphere from oil and gas wells and contributing to greenhouse warming is higher than suggested by the U.S. Environmental Protection Agency, according to an international team of scientists who spent three years flying over three areas of the U.S. during all four seasons.
Ethane storage seen as key to revitalization of Appalachia
By MARK GILLISPIE
April 29, 2019
AP NEWS
CLEVELAND (AP) -- Plans are underway in Appalachia to create two underground facilities to store ethane, a byproduct of natural gas drilling seen as integral to revitalizing a region still...