Who is Eric Clapton?

Eric Clapton is a British singer, song writer besides being a guitarist. He is well known for the scores like ‘Sunshine of Your Love’ and ‘Before You Accuse Me’. In his early life, he has performed with The Roosters. His close connection with The Yardbirds resulted in a successful score ‘For Your Love’. During his performance with The Yardbirds , he was nicknamed ‘Slowhand’. He established himself as a skilled guitarist during his performance with the Bluesbreakers. His second nickname ‘God’ was given during his performance with this band. His association with the band Cream helped him to prove his expertise as a multitalented person who can sing, create song and play guitar. The combined effort of Eric and this band includes hit scores like Sunshine of Your Love’, ‘White Room’ and ‘Crossroads’. He is the founder of the band Blind Faith. The score ‘Sunshine of Your Love’ is the perfect example of his special guitar sound, popularly known as the ‘woman tone’. As the winner of seventeen Grammy Awards, this renowned personality has suffered for his drug addiction and alcoholism. After his recovery, he has set up the Crossroads Centre in West Indies. It works for the rehabilitation of substance abusers. 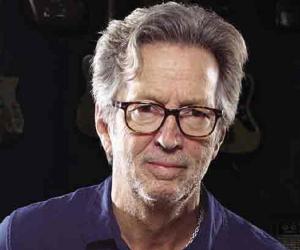 In the early period of 1963, he joined The Roosters, a band. But in August 1963, when the band broke up, he started performing as part of Casey Jones & The Engineers.

His association with The Yardbirds started in October 1963. In the next year, he performed for this band at the Royal Albert Hall, London. Later, he recorded his single ‘Good Morning Little Schoolgirl’ with this band.

The band received huge success after the release of ‘For Your Love’, a single. Though he played guitar during the performance of this song, he was against using commercial sound in this score.

After leaving The Yardbirds in 1965, he joined John Mayall & the Bluesbreakers. His performance with this band brought him recognition as a guitarist. At that time, he visited Greece for a short period with The Glands, a band.

After his return, he recorded ‘Blues Breakers With Eric Clapton’, an album with the Bluesbreakers. In 1966, he also performed as part of the Powerhouse, a British blues studio super group.

After leaving the Bluesbreakers in July 1966, he joined Ginger Baker’s newly formed band Cream. This band provided him the opportunity to prove his potentiality as a singer, songwriter and guitarist.

From 1968 to 1969, he played a vital role in the recording of the band’s successful scores like ‘Sunshine of Your Love’, ‘White Room’ and ‘Crossroads’. Along with George Harrison, he co-wrote ‘Badge’, a studio single for the Cream’s last album ‘Goodbye’.

Later, he formed Blind Faith, a British blues rock band that released an album of the same name in 1969. After the break-up of this band, he went on a musical tour with Delaney & Bonnie & Friends.

In the same year, he performed at a fundraiser programme for UNISEF in London. Inspired by Delaney Bramlett, he started singing and composing songs. In association with Bramlett, he recorded songs for the album, ‘Music From Free Creek’.

In 1970, he recorded his first solo album ‘Eric Clapton’ that got wide acknowledgement. In this year, he formed Derek and the Dominos. With this band, he released ‘Layla and Other Assorted Love Songs’.

In 1974, his album ‘461 Ocean Boulevard’ appeared. It contains popular singles like ‘I Shot the Sheriff’. The success of this album started his flourishing solo career.

In the next year, he released ‘There’s One in Every Crowd’, his new album. After releasing several of his albums, he performed for a solo album titled, ‘The Pros and Cons of Hitch Hiking’.