Who is Ellie Zeiler?

Ellie Zeiler is an American social-media influencer who rose to fame for her viral videos on TikTok. Even though she is relatively new on the platform, Zeiler has already amassed a fan base amounting to millions. Her lip-sync clips and dance videos are quite entertaining, while her issue-based videos inspire her viewers. However, amidst the COVID-19 pandemic, when there is a possibility that TikTok might be taken down in the U.S., Zeiler has turned to other social-media platforms. She is already an Instagram celebrity and has thousands of followers on the platform, owing to her jaw-dropping pictures on her profile. She has recently launched her YouTube channel and has already made a collaborative video. Zeiler is an aspiring real-estate agent and also plans to launch a cosmetic line someday. She is also passionate about pursuing modeling as a full-time profession. 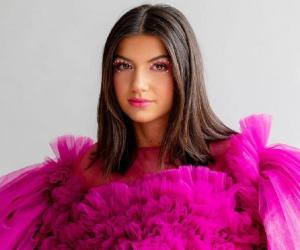 Rise as a Social-Media Sensation

Ellie Zeiler stepped into the social-media arena through the popular video-sharing application TikTok. It is not known when she created her account on the app, but she became active on the platform in March 2020.

She mostly posts lip-sync, dance, and cooking videos on her TikTok account, elliezeiler. She also shares videos related to meaningful activism. Zeiler first caught the attention of her viewers when popular social-media personality and dancer Charli D'Amelio posted a comment on one of her TikTok videos, saying that they resemble each other.

She accumulated around 2 million followers in just about a month.

In April 2020, Zeiler posted a set of TikTok videos, performing on the Megan Thee Stallion song Captain Hook. She currently has around 5.6 million followers and over 142 million likes on the application.

Ellie Zeiler has an Instagram page that hosts her random photos. Her Instagram posts show that she has an impeccable dress sense and is comfortable posing in front of the camera.

Her fashion photographs have earned her around 764 thousand followers on Instagram.

Ever since rumors of TikTok running the risk of being banned in the U.S. (amid the COVID-19 pandemic) surfaced, Zeiler and several other influencers began focusing on other social-media platforms, especially YouTube.

Even though Ellie Zeiler had a YouTube channel when she was in sixth grade, she re-introduced her channel in July 2020. The description on her channel states that she had created her self-titled channel in January 2017.

Currently, the channel has only three videos, of which one is a ''Q & A'' video, which also shows her makeup application skills. The channel also has a collaborative video with fellow social-media influencer Blake Manning.

The channel has so far accumulated a little more than 30 thousand subscribers.

Ellie Zeiler's amazing Instagram pictures earned her a photo-shoot feature story for The Teen Magazine. The journal also published an article on her social-media journey and fame, accompanied by a virtual photo shoot by Kate-Yeonjae Jeong.

Ellie Zeiler is a talented dancer. Her favorite sport is basketball, and she enjoys watching it, too.

Since her father has to move a lot for his job, Zeiler has changed schools multiple times. She wishes to attend New York University and aspires to make a career in real estate. Being a make-up lover, she wants to launch her cosmetic line someday.

Who is Ellie Zeiler? Everything You Need to Know

Who is Ellie Zeiler? Everything You Need to Know