Officially the Republic of Dagestan is a republic of Russia situated in the North Caucasus of Eastern Europe, along the Caspian Sea. It is located north of the Greater Caucasus, and is a part of the North Caucasian Federal District. As the southernmost tip of Russia, the republic shares land borders with the countries of Azerbaijan and Georgia to its south and southwest; and borders the Russian republics of Chechnya and Kalmykia to its west and north, while having a border with Stavropol Krai to its northwest. Makhachkala is the capital and largest city; other chief cities are Derbent, Kizlyar, Izberbash, Kaspiysk and Buynaksk.

The republic covers an area of 50,300 square kilometres (19,400 square miles), with a population of over 3.1 million residents, of more than 30 ethnic groups and 81 nationalities. With 14 official languages, and 12 ethnic groups constituting more than 1% of its total population, the republic is one of the most linguistically and ethnically diverse, as well as the most heterogeneous administrative divisions in both Russia and the world. Most of the residents speak Northeast Caucasian language; however, Russian is the primary language and the lingua franca in the republic.

"Dagestan" means "country of mountains". Gorges with vegetation, rocks and sheer walls, alpine meadows and snow caps occupy most of the territory of the republic. Mountains are the main wealth of Dagestan, which impresses both beginners and experienced travelers who have been to the Himalayas and the Pamirs.

The local population is open, friendly and hospitable. Some still have the opinion that it is not safe in Dagestan. But that hasn't been the case for a long time.

It is better to come to Dagestan in the warm season. August and autumn are fruit season. Local apricots, peaches, grapes, pomegranates are environmentally friendly and cheap.

Between Izberbash and Kaspiysk, on the coast of the Caspian Sea, you can find not very equipped, but chic sand and shell beaches. Bathe from May to early October.

Average temperatures on the plain are +28 °C in summer and +5 °C in winter. In the mountains, the climate is more contrasting, and winters are colder.

The most famous people from Dagestan: Khabib Nurmagomedov (UFC champion "The Eagle), Imam Shamil (leader of the Caucasian imamate in the war with the Russian Empire; "Imam of Dagestan and Chechnya"), Rasul Gamzatov (poet).

The Caspian Sea is the country's main fishery basin, whose bioresources include the world's rare and valuable fish species. 70% of the world's sturgeon stocks are concentrated here, more than 60% of the large balance. The natural environment of the Caspian Sea with a warm climate and magnificent sandy beaches has become a popular holiday destination for tens of thousands of tourists from all over Russia and abroad in recent years. In the summer season, almost all recreation centers on the coast are 100% full. Existing tourist bases, sanatoriums and hotels are being rapidly modernized and new ones are being built.

The Sulak Canyon is deeper than the famous Grand Canyon in Arizona and the deepest in Europe - 1,960 m. Length - 53 km. A bewitching picture of a grandiose natural miracle opens up to a person who stands on the edge of the canyon. The rocks go into a dark abyss, and an emerald river flows at the bottom.

Dunes up to 250 meters high rise in the middle of the endless steppe. Scientists are still arguing about how the sand was formed. But no one disputes that it is an amazing experience to walk along the dunes, imagine for a moment that you are in the desert, and meet the sunset, which is especially beautiful if you watch it from the top of the sand hills. By the way, the legendary film "White Sun of the Desert" was shot here.

The Karadakh gorge is called the "Gate of Miracles" - it is a high and narrow canyon with a width of two to five meters, a length of 400 and a depth of 170 m, which is cut into the rocks by the stormy river Kvartakh. In early spring, when the river is not very deep, you can walk along the bottom of the canyon.

Three villages in the Gunib district are located next to each other, so tourists usually visit them all, because each has its own unique attractions.

Gunib is a picturesque place in the mountains, where the sun shines 300 days a year. In the middle of the 19th century, Aivazovsky painted the painting "Aul Gunib", of which the locals are terribly proud. Visit the ruins of the Gunib fortress, Tsarskaya Polyana, where Emperor Alexander I talked with officers. If you go down a little lower, you will see Imam Shamil's gazebo and a corral with deer.

Chokh is one of the oldest villages in Dagestan and Russia with a special destiny. The Great Silk Road passed through Chokh. There are many outstanding people among the natives of the village: doctors of sciences and professors, artists, wrestlers and even one marshal of the Ottoman Empire. Choh is an open-air architectural museum with authentic terraced houses: the roof of one house adjoins the base of another.

Derbent with narrow streets and private houses is one of the few ancient Muslim cities that have retained their original appearance. Walk along the ancient streets, visit the Juma Mosque, look into the Carpet Museum and the Kubachi National House, the main market and the embankment to feel the spirit of the city. The Juma Mosque is the oldest not only in Russia, but also in all countries of the former USSR. It was built in 734. 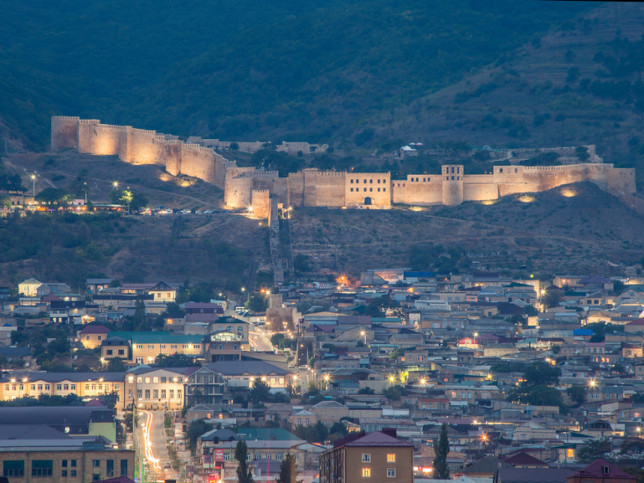 Naryn-Kala, the ancient fortress of Russia, was built on the shore of the Caspian Sea fifteen thousand years ago. This is the landmark of Derbent inscribed on the UNESCO World Heritage List. The Citadel guarded the strategically important Derbent passage between the Caspian Sea and the Caucasus Mountains and served as the most important outpost on one of the routes of the Silk Road. The remains of the defensive walls of Naryn-Kala Fortress have been well preserved in the old part of Derbent. Two high walls stretched from the fortress far to the sea, serving as an external protection for the city and the port, where ships with goods had been arriving. The same walls stretched to the Caucasian Ridge for 40 kilometers, but almost nothing has remained from them. In addition to the walls, towers, gates and fortifications, several other buildings have been preserved in the territory of the fortress: the khan’s baths, water tanks with silver impregnations, the underground Zindan prison and a cross-domed church of the V century, which later served as a temple of fire-worshipers and a mosque.

The hallmark of Dagestan food is khinkali (not to be confused with Georgian khinkali). Dagestan khinkal - pieces of boiled dough with lamb or beef, which are washed down with meat broth. The second most popular dish is chudu, thin tortillas with pumpkin, cottage cheese and other fillings.

The climatic zones of Dagestan are represented from the subtropical forest at the mouth of the Samur River to the desert and semi-desert in the north of the republic and to the high-altitude glaciers in Mountainous Dagestan. In general, the climate in Dagestan is temperate continental, arid. In the mountainous part, it changes with altitude: the temperature drops, the fruit yield drops. In the southern part, it is realized - transitional from temperate to subtropical. Average air temperature: in January - from +1C, in the lowlands to -11C in the mountains, the average temperature in July - up to +24C. The water in the Caspian Sea warms up to an average of 24-26 degrees in summer, and up to 35 degrees in shallow water.