Revolution in cuba culminating in 1959

The Cuban Revolution was an armed uprising led by Fidel Castro that eventually toppled the brutal dictatorship of Fulgencio Batista. The revolution began with a failed assault on Cuban military barracks on July 26, 1953, but by the end of 1958, the guerrilla revolutionaries in Castro’s 26th of July Movement had gained the upper hand in Cuba, forcing Batista to flee the island on January 1, 1959.

Lead-Up to the Cuban Revolution

After the Spanish-American War, the U.S. military directly administered the island until 1902, when Cuba became a republic, with sugar as its main commercial export. After a financial crisis and persistent governmental corruption, Gerardo Machado was elected as Cuba’s president in 1925, pledging reform. Instead, Machado became Cuba’s first dictatorial ruler, until he was ousted in 1933 after a revolt led by Fulgencio Batista, a rising star in the Cuban military.

Various presidents came and went over the next two decades, but Batista remained a constant force. He served as president himself from 1940-44, and ran for a second term in 1952. Facing defeat, he overthrew the government in a bloodless coup and canceled the elections.

Fidel Castro and the 26th of July Movement

Castro, a young lawyer and activist, had been running for Congress as part of the Cuban People’s Party before Batista seized power. Seeking to arm a revolutionary opposition to the Batista regime, he led a raid against the Moncada army barracks in the city of Santiago de Cuba on July 26, 1953. Most of the group was killed; Castro and his younger brother, Raúl, escaped but were later arrested and imprisoned.

Fidel Castro’s trial and imprisonment served to build his reputation as a revolutionary leader. After Batista yielded to international pressure and granted amnesty to many political prisoners in 1955, Castro headed to Mexico, where he began organizing Cuban exiles into a movement named for the date of the failed Moncada attack.

In November 1956, 82 men representing the 26th of July Movement sailed from Mexico aboard the Granma, a small yacht. Batista’s forces learned of the attack ahead of time, and ambushed the revolutionaries shortly after they landed in a remote area of eastern Cuba on December 2, 1956. Though most of the group was killed, around 20 of them escaped, including Fidel and Raúl Castro and one of Castro’s foreign recruits, Argentine-born doctor Ernesto “Che” Guevara. 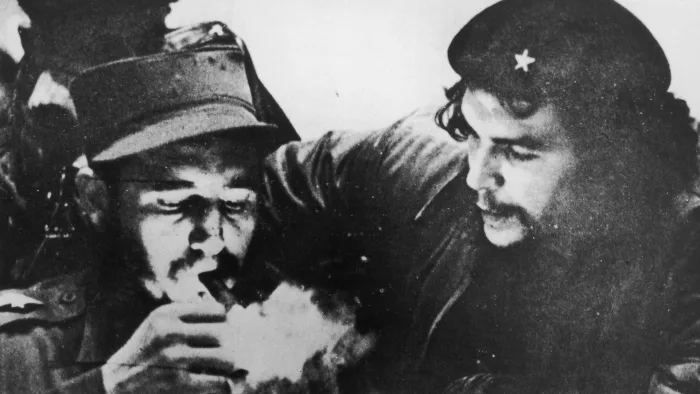 Reaching the Sierra Maestra mountains, Castro’s group attracted new members and began a guerrilla campaign against Batista’s better-armed and more numerous forces. Over the next two years, Cuba existed in a virtual state of civil war, with rebel forces carrying out attacks on government facilities, sugar plantations and other sites as Batista’s regime cracked down on anyone suspected of collaborating with Castro’s revolution.

In response to growing opposition, Batista suspended constitutional protections for Cubans, including freedom of speech and assembly. The following year, he called for the planned presidential election to be postponed, blaming the ongoing violence.

Believing support for the revolution was waning, Batista called for a major military offensive against the rebels in the Sierra Maestra mountains in the summer of 1958. Instead, the rebels swiftly turned back the offensive, forcing the army to withdraw. With international media giving favorable press coverage to the revolutionaries, the United States began to withdraw support for Batista’s government, which it had previously backed due to the dictator’s anti-communist stance.

In November 1958, the Cuban presidential election went ahead amid widespread fraud, with Batista’s chosen successor winning despite a more moderate candidate receiving more legitimate votes. As support for Batista continued to erode, the 26th of July revolutionaries struck the decisive blow in late December 1958, with Guevara’s forces defeating a much larger army garrison in the Battle of Santa Clara and capturing a train loaded with vital arms and ammunition.

On January 1, 1959, with rebel forces bearing down on Havana, Batista fled Cuba for the Dominican Republic; he later proceeded to Portugal, where he would remain in exile until his death in 1973.

Fidel Castro arrived in Havana on January 9 to take charge of a new provisional government, quickly consolidating control and rounding up Batista’s supporters, many of whom were tried and executed by revolutionary courts. Though Castro had called for elections during the revolution, he postponed them indefinitely once he came to power.

The United States was one of the first countries to recognize Castro’s government in Cuba, but relations between the two countries quickly deteriorated as Castro implemented a communist regime and forged close ties with the Soviet Union, the U.S. enemy in the Cold War. The United States broke off diplomatic relations with Cuba in early 1961, and the next few years were marked by escalating tensions, including the Bay of Pigs invasion (April 1961) and the Cuban missile crisis (October 1962).

Despite a long-running U.S. trade embargo, widespread economic hardship, a mass exodus of hundreds of thousands of Cubans and multiple efforts to implement regime change, Fidel Castro remained in power until 2008, when he formally resigned after handing off power to his brother. He died in 2016.

Title
Author
Date
Publisher
Description
Cuba's Economic Isolation Has an Environmental Silver Lining
Meghan Brown, Jeffrey Corbin
May 21, 2021
Scientific American
Scientific American is the essential guide to the most awe-inspiring advances in science and technology, explaining how they change our understanding of the world and shape our lives.