Large cat of the family felidae native to the americas

The cougar (Puma concolor) is a large cat of the subfamily Felinae. Native to the Americas, its range spans from the Canadian Yukon to the southern Andes in South America and is the most widespread of any large wild terrestrial mammal in the Western Hemisphere. It is an adaptable, generalist species, occurring in most American habitat types. Due to its wide range, it has many names, including puma, mountain lion, catamount, panther and painter.

The cougar is the second-largest cat in the New World after the jaguar (Panthera onca). Secretive and largely solitary by nature, the cougar is properly considered both nocturnal and crepuscular, although daytime sightings do occur. Despite its size, the cougar is more closely related to smaller felines, including the domestic cat (Felis catus) than to any species of the subfamily Pantherinae.

The cougar is an ambush predator that pursues a wide variety of prey. Primary food sources are ungulates, particularly deer, but it also hunts insects and rodents. It prefers habitats with dense underbrush and rocky areas for stalking, but also lives in open areas. The cougar is territorial and lives at low population densities. Individual home ranges depend on terrain, vegetation and abundance of prey. While large, it is not always the apex predator in its range, yielding prey it has killed to jaguars, American black bears, grizzly bears, packs of wolves or coyotes, and (in Florida) to American alligators. It is reclusive and mostly avoids people. Fatal attacks on humans are rare, but increased in North America as more people entered cougar habitat and built farms.

Intensive hunting following European colonization of the Americas and ongoing human development into cougar habitat has caused the cougar populations to drop in most parts of its historical range. In particular, the eastern cougar population is considered to have been mostly extirpated in eastern North America in the beginning of the 20th century, with the exception of the isolated Florida panther subpopulation.

Felis concolor was the scientific name proposed by Carl Linnaeus in 1771 for a cat with a long tail from Brasilia.The second half of the name, "concolor" is Latin for "of uniform color". It was placed in the genus Puma by William Jardine in 1834. This genus is part of the Felinae. The cougar is most closely related to the jaguarundi and the cheetah. 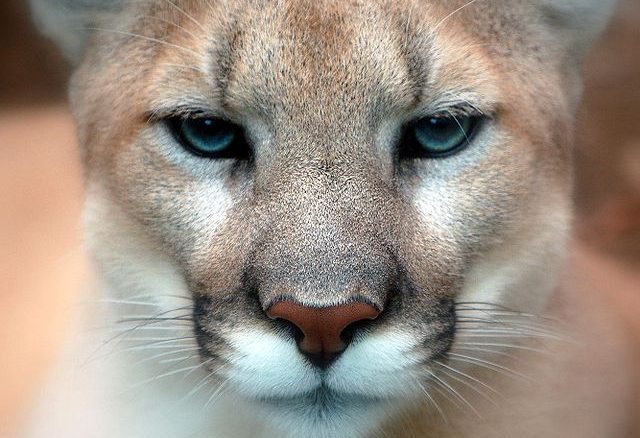 The family Felidae is believed to have originated in Asia about 11 million years ago. Taxonomic research on felids remains partial, and much of what is known about their evolutionary history is based on mitochondrial DNA analysis. Significant confidence intervals exist with suggested dates. In the latest genomic study of the Felidae, the common ancestor of today's Leopardus, Lynx, Puma, Prionailurus, and Felis lineages migrated across the Bering land bridge into the Americas 8.0 to 8.5 million years ago (Mya). The lineages subsequently diverged in that order. North American felids then invaded South America 2–4 Mya as part of the Great American Interchange, following the formation of the Isthmus of Panama. but the relationship is unresolved. The cheetah lineage is suggested by some studies to have diverged from the Puma lineage in the Americas and migrated back to Asia and Africa, while other research suggests the cheetah diverged in the Old World itself. A high level of genetic similarity has been found among North American cougar populations, suggesting they are all fairly recent descendants of a small ancestral group. Culver et al. propose the original North American cougar population was extirpated during the Pleistocene extinctions some 10,000 years ago, when other large mammals, such as Smilodon, also disappeared. North America was then repopulated by South American cougars.

The head of the cougar is round and the ears are erect. Its powerful forequarters, neck, and jaw serve to grasp and hold large prey. It has four retractile claws on its hind paws and five on its forepaws, of which one is a dewclaw. The larger front feet and claws are adaptations for clutching prey. 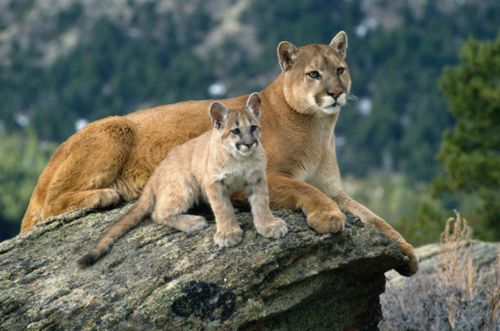 A successful generalist predator, the cougar will eat any animal it can catch, from insects to large ungulates (over 500 kg (1,100 lb)). Like other cats, it is an obligate carnivore, meaning it must feed on meat to survive. The mean weight of vertebrate prey (MWVP) that pumas attack increases with the puma's body weight; in general, MWVP is lower in areas closer to the equator. Its most important prey species are various deer species, particularly in North America; mule deer, white-tailed deer, elk, and even bull moose are taken. Other species taken include bighorn and Dall's sheep, feral horses, fallow deer, caribou, mountain goats, coyotes, American badgers and pronghorns. A survey of North America research found 68% of prey items were ungulates, especially deer. Only the Florida panther showed variation, often preferring feral hogs and armadillos.

Females reach sexual maturity between one-and-a-half to three years of age. They typically average one litter every two to three years throughout their reproductive lives, though the period can be as short as one years Females are in estrus for about 8 days of a 23-day cycle; the gestation period is approximately 91 days. Females are sometimes reported as monogamous, but this is uncertain and polygyny may be more common. Copulation is brief but frequent. Chronic stress can result in low reproductive rates in captivity as well as in the field. 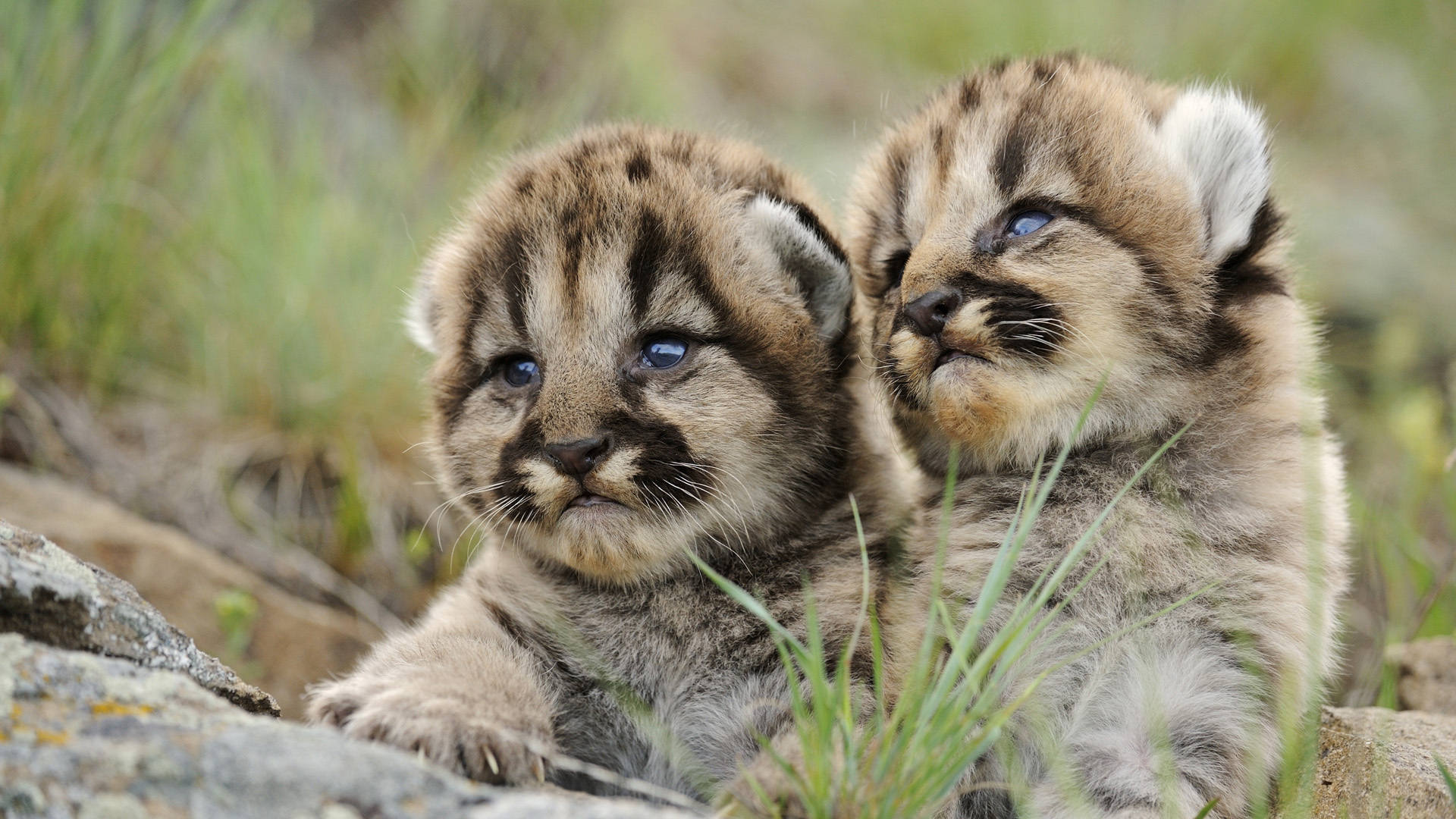 The cougar is listed as Least Concern on the IUCN Red List as of 2015 and is also listed on CITES Appendix II. It is threatened by habitat loss, habitat fragmentation, and depletion of its prey base due to poaching. In Florida, it is threatened by heavy traffic, which causes frequent fatal accidents involving cougars. Highways are a major barrier for dispersal of cougars. Hunting it is prohibited in California, Costa Rica, Honduras, Nicaragua, Guatemala, Panama, Venezuela, Colombia, French Guiana, Suriname, Bolivia, Brazil, Chile, Paraguay, Uruguay and most of Argentina. Establishing wildlife corridors and protecting sufficient range areas are critical for the sustainability of cougar populations. Research simulations showed that it faces a low extinction risk in areas, which are larger than 2,200 km2 (850 sq mi). Between one and four new individuals entering a population per decade markedly increases persistence, thus highlighting the importance of habitat corridors.